Review: Honor 8 is intriguing, beautiful, and powerful, but still held back by pesky EMUI 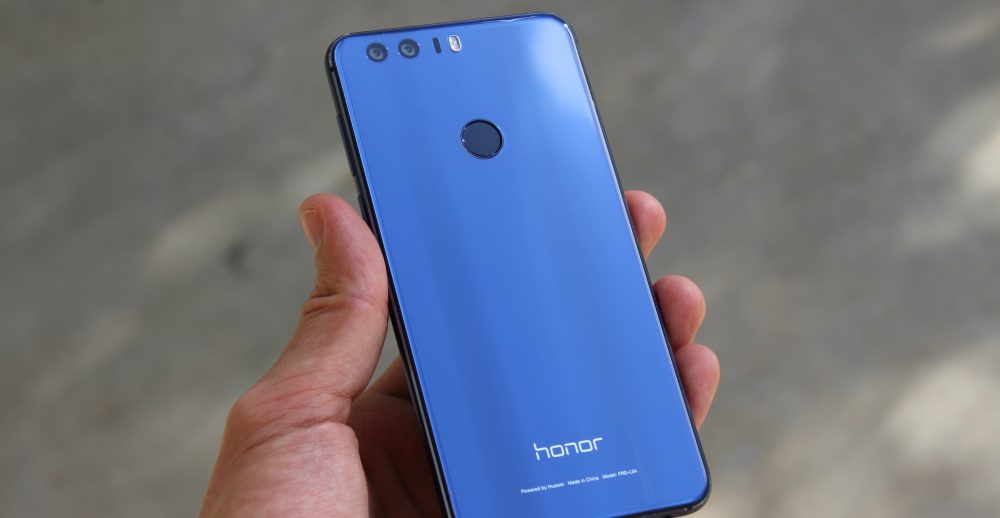 I hope that a day will come that I can review a Huawei/Honor device and not mention that software is its biggest weakness. Unfortunately, today is not that day. But I have good news. If the Honor 8 wasn’t a remarkable step forward for Huawei’s millennial-focused sub-brand, I probably wouldn’t be reviewing it. But here I am. I’m reviewing it. And that’s because it’s worth talking about…

— It’s freaking beautiful. First thing’s first. As you can see in the above photo (and others on this page), the Honor 8 is just a beauty of a phone. It’s not a completely new design, but it’s a notable entry with a nice glass-backed premium build at a low price. At the $350-$400 that the Honor 8 goes for, the sheer beauty of its exterior build is a huge selling point here — and that alone will catch the eye of many. But I guess Huawei and other Chinese manufacturers have been breaking our price-point expectations for a couple years now, going all the way back to the OnePlus One and earlier.

You could say that the aluminum build (with a fingerprint sensor!) that the Honor 5X launched with earlier this year is in the same vein. It’s not a new idea, but at its price point (in the case of the Honor 5X, 200 freaking dollars), it’s pretty notable. The design of the Honor 8 is aluminum around the edges, with two flat (read: no camera bump!) panels of glass on the front and back. It reminds me a lot of flagship phones that go for twice this price, like the Galaxy Note 7 or the Galaxy S7 edge.

The one downside that comes with this design is slipperiness, but it’s not any worse than other phones with similar builds. I almost dropped the phone a few times in my first day of using it (which would be tragic with so much glass), but thankfully Honor includes a plastic case in the box. After I popped that on (it’s literally just a clear plastic sleeve), I didn’t have any problem. This also protects the back glass from scratching.

— That dual-camera set up is nice. If you’re a fan of the bokeh (or should I say faux-keh) that has recently been popularized with the iPhone 7 Plus, you might be surprised to know that the Honor 8 has already shipped with a very similar feature. The phone has two cameras in a similar arrangement as Apple’s new flagship, and it can do some of the same things. Instead of a telephoto second lens like the iPhone, though, the Honor 8 has a second monochrome second lens for better lighting and sharpness when taking black and white photos. I don’t care for black and white photos personally, so that doesn’t mean much to me.

Let it be known that I am probably the most amateur of all photographers. I barely know more about cameras than the average person (basically enough to operate a DSLR, and that’s pretty much it), so I literally just walked outside of took some photos with the shallow depth of field mode enabled. But that said, I think the faux-keh is more than decent on this phone, and enough that the average person would be impressed; check it out:

— The fingerprint scanner doubles as a shortcut key. It may be expected that a $400 phone has a fingerprint sensor at this point in 2016, but I have to say that the one on the Honor 8 works really well. It’s a smooth glass indention that sits smoothly on the back of the device, and it’s super fast. Going from locked with the screen off to looking at your home screen takes less than a second, so I’d say it’s up to par with pretty much all the other players in the market.

But with the Honor 8, the company is also introducing a really cool feature that lets you program the fingerprint scanner button to take you to apps and other functions with just a tap. (In case you’re confused, the Honor 8 also has a separate lock button, so the fingerprint button doesn’t work the same way it does on LG phones.) For example, I can program the fingerprint scanner button to turn on the flashlight with a single tap, or launch the Twitter app with a tap-and-hold. Or, a double tap can take me straight to the messaging app that I prefer. It’s handy.

— There’s an IR blaster. Now that’s something you don’t often hear in 2016. This phone is so similar to Huawei’s P9 in so many ways, but one way it differs is the inclusion of an IR blaster. I don’t personally have much use for it, but if you’re the kind of person that likes to control all of your living room devices from one place, the Honor 8 has you covered. The “Smart Controller” app has a huge catalog of devices to choose from — including air conditioners, TVs, DVD players, cameras, and more.

— The phone has solid specs. I feel like I’m beating a dead horse when I talk about how Chinese OEMs have drastically driven down expected price points to get access to top-of-the-line specs, but the whole package that is the Honor 8 is the prime example. Besides the premium build, and the inclusion of dual-cameras, a fingerprint sensor, an IR blaster, and other goodies, the Honor 8 is just a beast in a small package.

And these specs come with performance that’s pretty top-notch as well. Despite some I issues I have with the software in general (which I’ll talk about below), the Honor 8 seems to perform really well. Navigating around the OS is snappy and mostly smooth, and the problems that I do have are less about performance of the hardware and more about preferences in how the UI is structured and designed in general.

I didn’t have any problems running and multitasking around the normal collection of apps that everyone uses, with the exception of one crippling bug that seemed to completely kill all video playback on the phone until a restore. Yes, that sounds pretty bad (and I’ve heard of the same problem occurring on some friends’ Honor 8s as well), but I’ve also been told that the issue has already resolved and will be fixed in a forthcoming update to EMUI.

— Which brings us to EMUI, the bane of Honor 8’s existence. I definitely don’t feel as strongly about the crappiness of EMUI as I did earlier this year with the launch of the Honor 5X. It’s definitely improved since then, and it’s a lot less buggy in general. The appearance of EMUI is still very much like a knock-off of iOS (which will hopefully be changing in the nearish future with EMUI 5.0), but overall I didn’t think that using Honor’s stock Android skin was absolutely terrible.

The way that the notification drop-down works is just completely frustrating and feels foreign compared to almost every other Android phone on the market. It kind of tries to act like Android in some ways, but it’s confusingly topped with an iOS aesthetic that just doesn’t make sense. There’s just no consistency, and the “Shortcuts” panel, which houses all the quick settings, is confusing to use as well. Add to that some of Huawei’s built-in apps are direct iOS copies (and their icons are gross), and I’m not a happy camper.

But the reason I say that it’s the bane of the phone’s existence is that this could have been a top-to-bottom, little-to-no-compromises, all-around-fantastic Android phone at an amazing price point. I would have potentially even called this device the phone of the year. I would have said that this was a no-brainer purchase for literally anyone… if the software had been better. We’re expecting an overhaul soon, but I hope it’s not too little too late for Honor.

— You can’t ignore this phone at $400. The thing that I have to remind myself when looking at this device is that it’s just a little bit more than half the price of the similarly-specced phones it hopes to compete with. I can complain as much as I want about how much I don’t like Chinese iOS knockoff operating systems, but as an Android phone, a device that you use to check your email, browse the web, post Instagram pictures, and send some Snapchats, the phone is more than capable. Especially if you load your favorite launcher and use the Google Keyboard, I can see a lot of people enjoying this as a daily driver.

You can currently get Honor 8 at Amazon for $400 shipped in either black or white. The blue model you see above seems to have scattered availability just about everywhere (including Honor’s own site), but it seems to be currently available at Best Buy for the same price.