Google Pixel XL vs. OnePlus 3T: Easily two of the year’s best Android phones, but not easy to pick 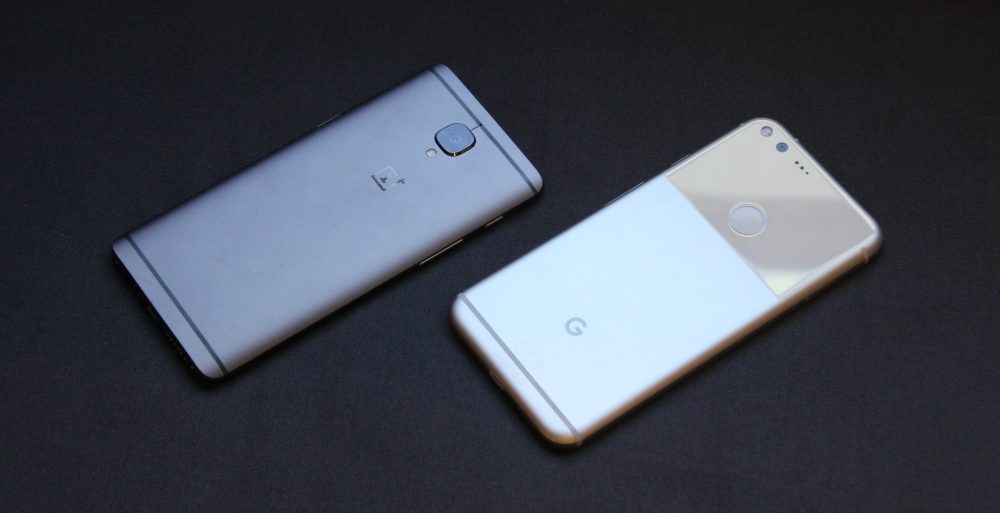 In my eyes, there are two standout Android phones for the second half of this year, and they serve slightly different target markets. The OnePlus 3T, the revamped version of the Chinese company’s OnePlus 3, brings a lot of high-powered specifications in an affordable package that’s super developer- and tinker-friendly and well-designed. The Google Pixel (XL, in this case), on the other hand, is a device that is similarly well-designed, but higher-priced, has compromises and is aimed at the average consumer — the kind of person who couldn’t care less about specs.

The problem is that a lot of people fall in between these two categories. They want a consumer-friendly phone that “just works”, and they also want a phone that has all the bells and whistles. They want a phone with a great camera and great battery life, but they also want a phone that they can tinker to their heart’s content and has as few compromises as possible at the lowest price-point possible. If you’re that person, you’re not going to go wrong with either of these choices. But let’s take a look real quick at the differences between the two phones if you still can’t decide.

Going into this, I’m assuming that you know both of these phones are great phones. And with that, it’s worth noting that, generally speaking, they have very similar displays. The Google Pixel XL has a 5.5-inch AMOLED display at a resolution of 1,440 × 2,560 pixels, while the OnePlus 3T has a 5.5-inch AMOLED display with a resolution of 1,080 × 1,920 pixels. In my testing I’ve found that the OnePlus 3T can get brighter than the Google Pixel, but it’s likely that the Pixel’s limitation is a artificial one to preserve battery life. We’ll talk about that more below.

The design of the two phones is actually pretty similar — albeit with some notable differences. They both have largely aluminum bodies, antenna lines (the Pixel has one stripe on the bottom and three on the top around the edges, while the OnePlus 3T has just two stripes on the top and bottom), and chamfered edges around the front. The Pixel puts the lock button and volume rocker on the right side, while the OnePlus 3T puts the lock button on the right with volume on the left.

One thing you’ll notice with their physical designs is the OnePlus 3T’s inclusion of a fingerprint sensor + home button combination at the bottom of the front of the phone, and Google’s decision to put the fingerprint sensor (Pixel Imprint) on the back with software home, back, and multitasking buttons on the front. The OnePlus 3T has two small lights on the bottom bezel for customizable use — they default to the same functions and orientation as the Pixel and Nexus phones before it, though.

Finally, the Pixel has its signature glass “top-third” back. This is the phone’s claim to design fame, but its functionality has been explained away as simply “to improve cellular reception”. Also on the back, the Google Pixel goes without a camera bump, placing the camera and the flash, as well as the microphone and laser autofocus at the top-left of the back. The OnePlus 3T has a decent camera bump on the back, with the flash located below that and a microphone above. 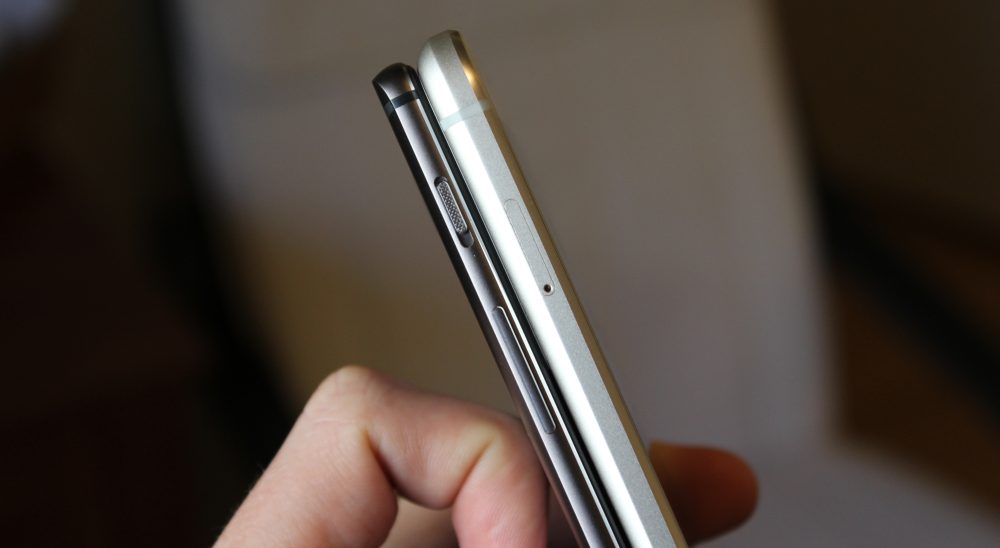 As for audio, the Pixel XL has a headphone jack at the top and microphone/speakers along the bottom. The OnePlus 3T goes with a headphone jack, speakers, and microphones all along the bottom of the phone. Since both phones have just a single bottom-firing speaker, I found the audio quality to be about the same. The max volume of these speakers is also about in the same range — loud enough to listen to music in the bathroom while you’re taking a shower.

I’ll touch on this more under software below, but my impression is that the Google Pixel has slightly better performance than the OnePlus 3T, despite having the same Qualcomm Snapdragon 821 system-on-a-chip and a higher 6GB of RAM (the Google Pixel XL has 4GB). Both phones perform up to par, though, I would say that they both do better than many other Android phones from this year — like the Galaxy S7 Edge and the LG G5. When playing games, neither phone have much problem with anything you could download from the Play Store and everything is as smooth as butter.

I haven’t had the OnePlus 3T long enough yet to have a good gauge for its battery life, but the phone should do markably better than its OnePlus 3 predecessor thanks to its 3,400 mAh battery. That’s compared to the 3,450 mAh battery on the Pixel XL. I can tell you — and this is really what matters — that both phones will get you through a full day on a single charge. The Pixel especially so, since Google has gone to such great lengths to optimize its software. If you mess around with the OnePlus 3T’s software enough and install rooted apps that drain your battery, you might find yourself needing to top up before bedtime.

Regardless of which phone you go with, you’re going to have a great pair of cameras. But I think that the Pixel is going to win this battle (at least for the main shooter), despite offering a sensor that’s a lesser 12.3MP compared to the OnePlus 3T’s 16MP sensor. This is one case where the Pixel — once again — has the benefit of software optimization. The phone’s electronic image stabilization is some of the best I’ve seen in a phone, and the camera app itself performs amazingly.

The Pixel, as many have mentioned before, tops the DxOMark benchmark. That in and of itself doesn’t prove that it’s an amazing shooter, but I think we’ve seen at this point that the Pixel is pretty much the best camera on a smartphone today — perhaps even topping the iPhone 7 Plus. I’m not a master photographer by any means (usually my shots are pretty well representative of something your grandmother would take), but I think I agree with the consensus on this one.

Check out these samples (Google Pixel XL on the left, OnePlus 3T on the right):

On the software side, you’re getting two different takes on what is mostly stock Android. OxygenOS on the OnePlus 3T is based on Android Marshmallow (Nougat is coming… eventually), and takes stock Android and adds some useful features — like gestures, customizable buttons and launcher, and more. The Google Pixel XL, similarly, takes “stock” Android and adds some of Google’s own customizations. You’re getting things like circular icons, 24/7 support from Google in the Settings app, gestures (like the ability to swipe down on the fingerprint sensor to show notifications), and the Pixel Launcher.

But the biggest difference to me between these two phones is that the Google Pixel — even though it has the exact same processor — is a far better performer in general. Many have pointed out the OnePlus 3T’s issues with touch latency, but I think the issue is bigger than that. Google obviously took the time to truly optimize the Google Pixel’s software to minimize lagginess, frame rate stuttering, and RAM loading and offloading. You can navigate around the Pixel XL for days without having hardly a hiccup — and while the OnePlus 3T is better than most, it’s not as obviously polished.

If you’re on the fence about making the switch because switching from the “other side” (read: an iPhone) sounds difficult, Google has you covered. The Pixel comes with an OTG dongle, which might sound unfamiliar, but it’s just a little adapter used for plugging in your other phone directly to the Pixel. If you’re coming from an iPhone, you can just plug it straight into your new phone and Google will walk you through moving over all your data when you first set up the phone.

Rounding things out, let’s talk about the price of these two phones. At retail, the 64GB OnePlus 3T will run you $439, while the Google Pixel XL will run you a lot more —  $769 for the 32GB model. That sounds like a huge price difference for two phones that aren’t all that much different. And it is. But with the Pixel you’re getting all the latest software straight from Google (which also means the smoothest and best software experience in general), one of the best smartphone cameras ever, killer battery life, and other goodies like unlimited Google Photos storage in full-res, Daydream readiness, and more. Also worth noting is that the Pixel will get you access to all major US carriers, while the OnePlus 3T is GSM (AT&T and T-Mobile) only.

Like I said in my Google Pixel review, it’s a tough situation and a deeply personal decision. For me, the answer to this question is the Google Pixel — and I’m not getting paid to the say that. It really does matter to me that the I have the best software experience possible. And this isn’t anything personal against OnePlus. As I said in my full review, “none of the other OEMs can offer this flavor of Android that has this degree of Google’s mark and influence.” It really is a whole level above any of the customized Android skins from Samsung, Huawei, LG, and OnePlus. Does that matter to you? Let us know below.