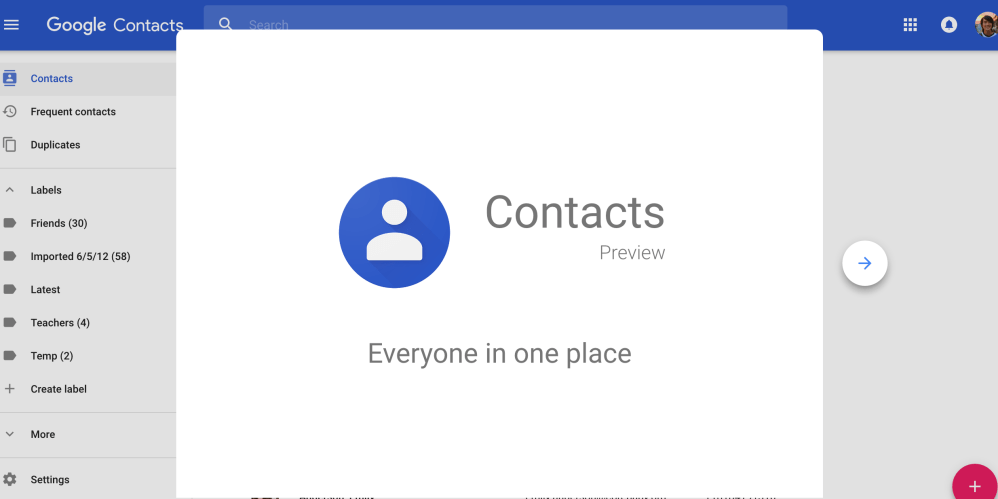 Last year, Google Contacts on Android received a major redesign that introduced a new interface and added several features. In contrast, the web version has been languishing for years with Google’s pre-Material Design style. Today, a significant revamp brings it to visual and feature parity.

Dropping the white top bar, Contacts adopts Material Design with a blue app bar that features a hamburger button and navigation drawer. A FAB in the bottom right corner allows users to add contacts in a simplified overlay that shows fewer fields by default.

The main list is now organized in similar fashion to mobile and first shows your starred contacts. This feature parity also extends to the contact card where a new ‘Interactions’ section shows past emails and calendar events. In comparison, ‘Recent’ in Android shows calls and text messages, but hopefully a future update would add the full Interactions.

Added to the navigation drawer is a new ‘Frequent contacts’ section and Duplicates, instead of ‘Suggestions’ on mobile. Underneath is a ‘Labels’ dropdown that can be minimized and ‘More’ which includes: Import, Export, Print, Undo changes, and Other contacts. Settings is sparse with only language controls, phone number country code, and first/last name sort.

Interestingly, this Material version of contacts is still labeled as a ‘Preview’ and allows users to revert back to the old interface from the navigation drawer.

Heading to contacts.google.com should load the new version, with the initial launch walking users through a tutorial.