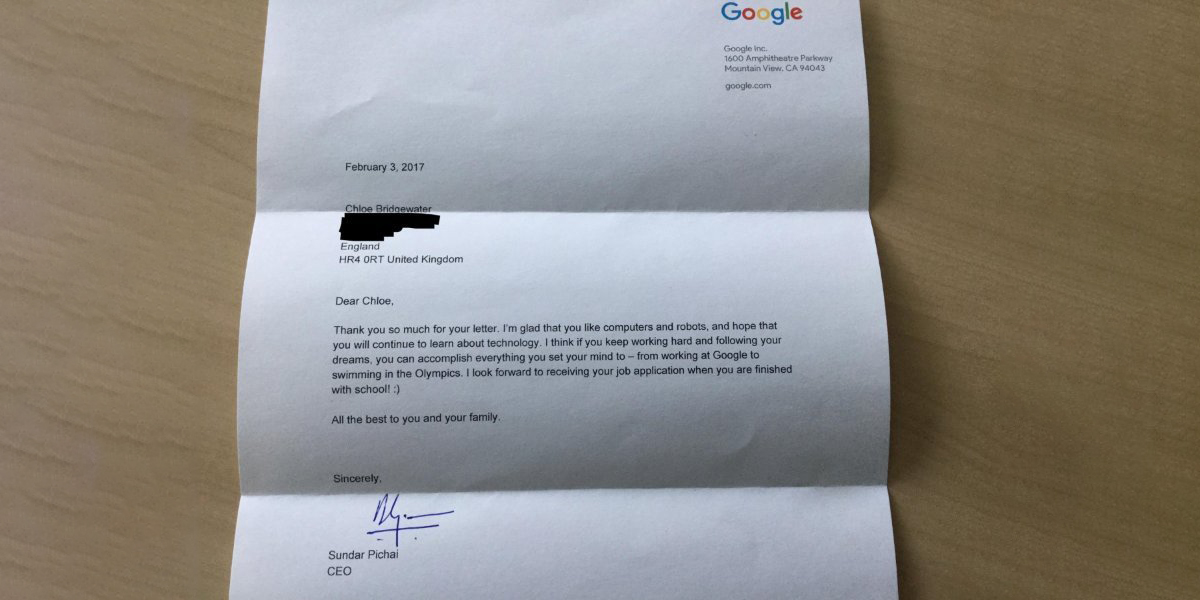 Prepare for a cuteness overload-induced meltdown. Because if this letter (whose veracity has been certified by Business Insider), sent by 7-year old Chloe Bridgewater, doesn’t make you go all “awwwww”, then you’re probably a terrible human being. But the best part of it is still its receiver, who actually got to read it and eventually responded, too…

As it turns out, it was none other than Google‘s very chief executive, Sundar Pichai, who was labeled as “Google Boss” in the letter’s header. The young British girl is all kinds of smart: she loves computers and robots, is in love with her Kindle Fire tablet and loves “bag chairs, go-karts and slides”, so she figured out that sending a job application was the logical thing to do.

And she didn’t think twice about going straight to the top; you can only imagine her face when she got an actual response in her mailbox, then. The CEO obviously encouraged the little girl to follow her dreams, and concluded his reply with a happy “I look forward to receiving your job application when you are finished with school! :)”.

It was apparently a huge confidence boost for Chloe, who, according to her father Andy, had been “knocked down” by a car years ago. She made her dad clear that her commitment towards actually joining Google has increased tenfold, with requests to “go on TV and talk to the media and use that to find some way in to the Silicon Valley-based search company”.

Go on, Chloe, and follow Sundar’s advice — we all root for you!