Nougat saw solid growth in April’s distribution numbers as more devices get updated to the latest version of Google’s mobile operating system. Adoption will only increase in the coming months as this year’s flagship phones begin hitting the market.

Android 7.0 jumped from 2.4% in March to 4.5%, while 7.1 interestingly stayed at 0.4%. With 7.1.2 now rolling out to Google’s devices and available in AOSP, manufacturers will likely begin the process of crafting updates. In general, API level 25’s most significant and visible feature is support for app shortcuts.

Notable updates in the past month include Verizon’s Galaxy S7 and the Moto Z Play. The Razor-owned Nextbit finally pushed Nougat to the Robin, while LG confirmed Android 7.0 for the G4 and V10.

Growing for the past several months, Android 6.0 fell .1 percentage point to 31.2%. While Marshmallow is the single most used version of Android, 5.0 and 5.1 Lollipop still combine to have the largest share at 32%. KitKat is at 20% and Jelly Bean 10.1%. Meanwhile, Ice Cream Sandwich and Gingerbread dropped the same amount and is now at .9%.

These numbers are compiled from Android devices that accessed the Play Store in a seven-day period ending on April 3rd. 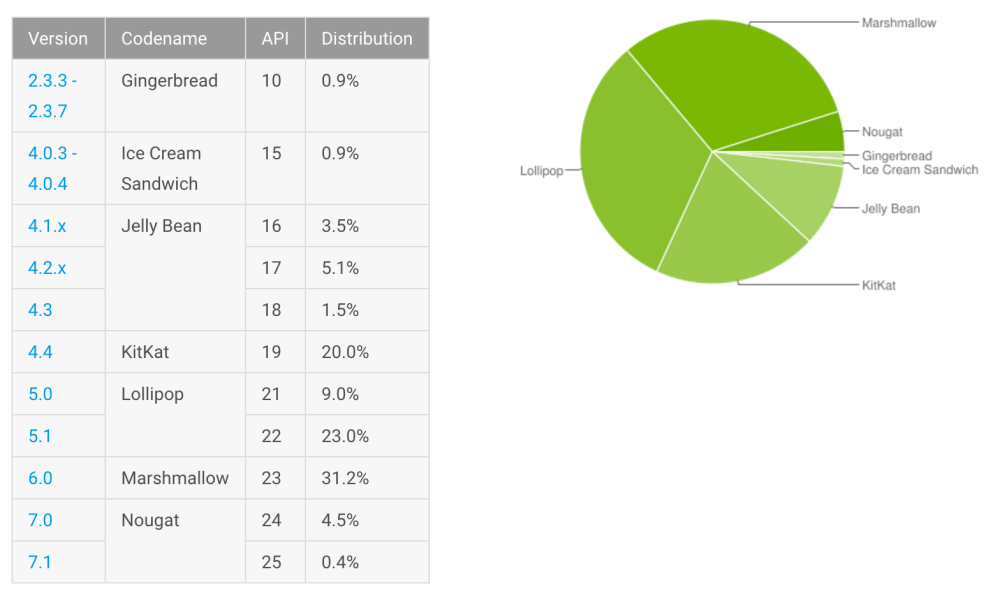