I haven’t watched live television at home in years. At the very least, my typical show viewing is delayed to the day-after online premiere, but more frequently until the full season is added to a service like Netflix. Meanwhile, news has been augmented by Twitter and other illicit livestreams for major events.

As such, something like YouTube TV is especially geared towards habits like mine and to that of a generation who does not watch in real time. After a few days of using the service, I think YouTube TV is fantastic — due not only to a combination of content and technical prowess, but more importantly a familiar interface and experience.

YouTube TV is a solid, modern Android app. The opening Material animation is quite delightful and everything feels similar to the main YouTube app. With predominantly white with red accents visually, there are three tabs to navigate between. The first item in the Home feed is a carousel of channels that are “on” right now with a clever lower resolution preview.

This channel surfing is delightfully simple and preferable to the up-and-down channel browsing that I remember the analog experience to be. These carousels are heavily leveraged throughout the app and really highlight for me how I now have access to so much more content.

There is a dedicated Live tab to the right and a Library to the left. As somebody who likes having downloaded media, or at least a queue quickly on hand, this will be heavily used to manage shows I frequently want to return to.

My favorite part of the app is how some of the main YouTube app’s functionality — like its picture-in-picture player and swipe-to-close gesture — work the exact same way here. Having been attuned to watching video in a tabbed browser experience, I habitually search for what to watch next before the current show has even finished. The mobile app allows me to keep this habit up, as does the web interface.

When Google announced TV, they highlighted their technology stack as a marquee feature of the service. At the time, I found this odd and table stakes, but not after hearing how competing internet services still choke when dealing with scale.

So far, YouTube TV is as reliable as the main video site. It’s a level of expectation and experience I’ve grown accustom to when watching video on the web and one I expect to translate over to all other video services I watch.

The adjustment to the breadth of content on live television is honestly crippling. Having access to live broadcast channels obfuscates my need to buy single television episodes or hunt for clips the  day after. Something like Hulu is no longer needed, while other premium channels like FX being available definitely makes me more inclined to watch their shows.

As somebody who is unacquainted to the immediacy, but generally prefers things as soon as possible, I think live television might just change my viewing preferences in the long term. With the stability of the mobile app, I’m inclined to also do it anywhere versus on just my “best” screen. 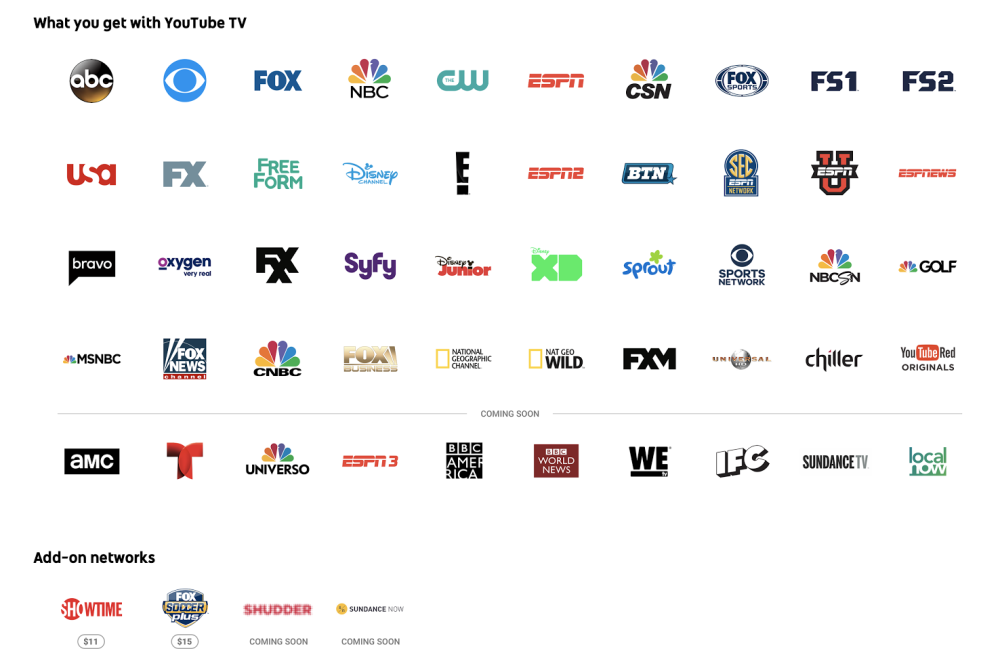 Even having been so used to Twitter for watching live events as of late, I think I might at the very least start watching cable news channels on YouTube TV for breaking news. It already proved useful last night, and, at the moment, the newness of it is something I enjoy.

The biggest downside, so far, is how YouTube TV still shows regular broadcast ads. Off hand, I do not feel like they are targeted or even close to my interests whatsoever. But I guess that’s to be expected. The other thing to note is that the number of markets where YouTube TV is available is still painfully limited.

Broadly speaking, companies adapting to reach newer generations and their already ingrained habits have a herculean task ahead of them. YouTube’s biggest advantage is how it’s already so familiar and trusted by the audience that is highly prized.

Using YouTube TV does not feel too different from using the massive user-generated video network and that’s how Google will get its foot in the door. What they have to do next is change viewing habits, but from just a few days of my usage that might not be all too difficult.