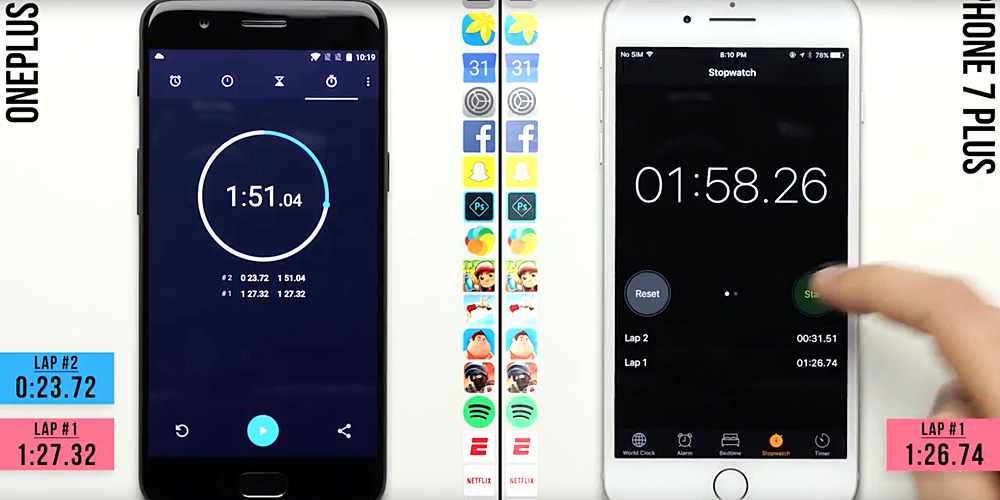 David Rahimi has been conducting speed-test battles between iPhones and Android phones for quite some time now, and his latest test is the first time anything has beaten an iPhone. The OnePlus 5 – which is a blatant copy of the iPhone 7 Plus design – proved faster than the phone it mimicks …

The OnePlus ends up beating out the iPhone by a full seven seconds.

But where there is a real-life element to the test, like exporting a file or loading a video, mostly the tests just measure how quickly a device opens a bunch of apps. And the biggest differentiator in that has nothing to do with the speed or power of a phone’s hardware, but rather how the software handles animations.

Because each phone animates the opening of apps and return to the homescreen, to give the feel of windows opening and closing, there’s a measurable time-lag involved. Mostly how the OnePlus wins is by having faster animations in its Android skin. And that’s not the only way the OnePlus cheats speed-tests …

You can watch the test below.

That said, it’s an interesting phone for sure. You can check out our unboxing & hands-on, opinion piece and getting-started guide to find out more.