Following a set of sketchy case leaks earlier today, the first big Pixel leak for 2017 has hit the web. In this first render, we get a look at the somewhat familiar design of the next phone as well as getting some new details on what Google has in mind for its 2017 flagship.

Courtesy of Android Police, the first Pixel “XL” leak shows us that Google isn’t straying all that far from the Pixel’s roots for its first successor. The same basic design is definitely present here, but with some very clear changes. First and foremost, there’s the new display.

Like the current Pixel and Pixel XL, “Tamien” is going to offer another AMOLED panel but this time surrounded by far smaller bezels and with a larger 6-inch panel. The look here is very similar to the LG G6, but with rounded edges, as we’re expecting from the LG V30. This makes sense considering that LG is currently rumored to be manufacturing this larger device.

As with other “bezel-less phones,” the 2017 Pixel XL is expected to use a 2:1 aspect ratio as is clearly reflected in this first render.

Above the display up front, we’ve also go a front-facing camera sensor in the same place as the previous Pixel, but the earpiece has been replaced by a front-facing speaker, a welcome revival from the Nexus 6/6P.

The back of the phone has the closest resemblance to the current Pixel family with a metal design on the bottom and a glass window up top which houses the camera sensor. This time around, though, the camera sensor is considerably larger, and perhaps not completely flush to the body while the glass window itself is smaller. The fingerprint sensor has also left the glass window, now sitting within the metal portion of the phone. 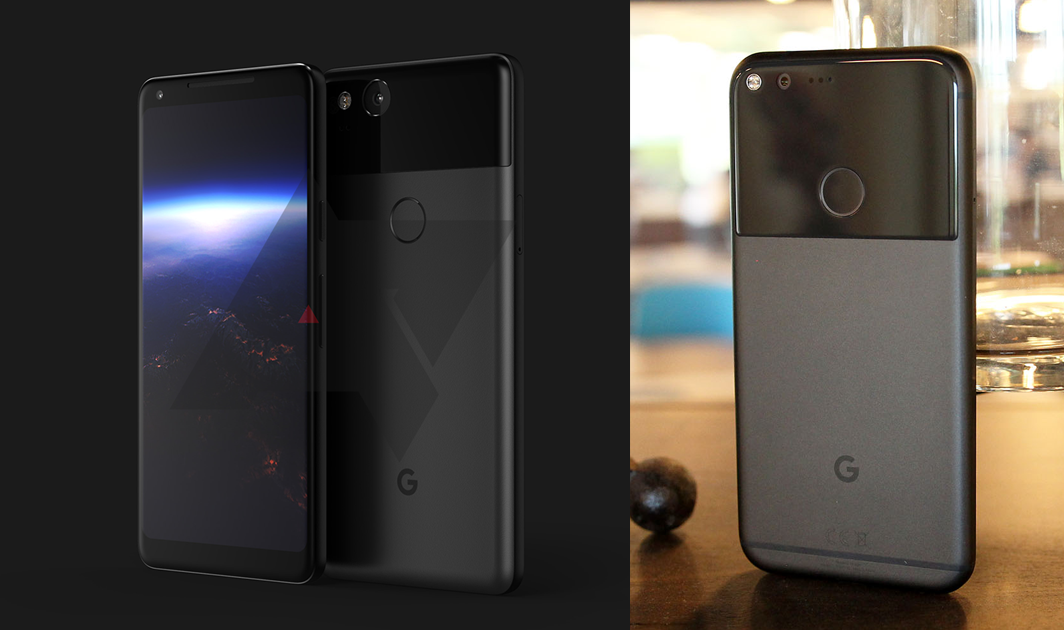 Like on the previous models, the Google “G” logo still appears toward the bottom of the phone but there’s no antenna band this time around, at least according to this render.

“Taimen” certainly isn’t going to blow anyone away in terms of design, but it’s definitely a step up from the original that will age much better through 2018. Unfortunately, Android Police isn’t confident that this same design is going to make its way to the smaller Pixel, “Walleye.” As previously reported, this smaller phone is expected to have a design similar to the original.

Along with the new display, the 2017 Pixel XL may have another trick up its sleeve with a squeezable frame. Android Police reports that “Taimen” will likely have a squeezable frame similar to that of the HTC U11. Apparently the primary use of this tech on the Pixel will be to interact with Google Assistant rather than the various actions supported by Edge Sense.

Obviously, we’re still a ways away from the launch of the next generation of Pixel phones, but so far, things are looking quite promising.