Amazon Music, one of the less popular of the many mainstream music streaming offferings, has added Chromecast support to its Android app.

TechHive first noticed support for the Google streaming device platform earlier this month, but the addition recently went official in a change log for the app on the Google Play Store.

The latest version, showing as updated on November 13th, includes the following changes:

– Chromecast Support: You can now select music on your Android device, and have the music play on your Chromecast enabled devices.
– The Amazon Music app now features Alexa. Tap the new “Alexa” button and ask Alexa to play new music, play a song by its lyrics, play work-out music, or many other Alexa supported commands or questions, all from within the app.
– Alexa is available for customers on Android Lollipop (5.0) and higher.

When playing a song in the Amazon Music app, you should now see a familiar “Cast to” button at the top-right corner of the screen. From there, you should be able to select any Chromecast-enabled device, such as a Google Home, an Android TV, or, well, a Chromecast. 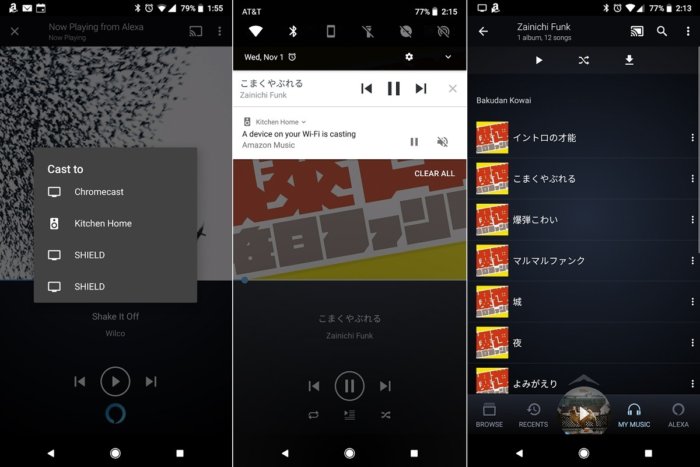 Amazon and Google don’t exactly have the best history when it comes to interplay with services and apps, so it’s great to see Amazon Music get support for the platform. Many who have an Amazon Prime membership (myself included) might not know that Amazon Music even exists, though.

If you’re a Prime member, you can stream music in Pandora-like fashion in the Amazon Music app right now. Or you can get Amazon Music Unlimited for 3 months for $0.99, with a monthly price of $7.99 thereafter.