With last week’s redesign, the Google Assistant gained an updated interface on Android. Today, a refreshed look that we previously activated is also coming to the Explore tab, along with a number of other changes to improve both Assistant app discovery and functionality.

Several Google app versions ago, we spotted a refresh to the Explore tab that dropped carousels of Actions for a simpler list. That new design is now official, along with a “What’s new” and “What’s trending” section for the app directory.

These dynamic sections will constantly change and evolve, creating more opportunities for your app to be discovered by users in all supported locales where the Google Assistant and Actions on Google are available.

Meanwhile, Explore’s search feature is adding autocomplete and new subcategories. For instance, “Food & Drink” is now broken down into subcategories like “Order Food” and “View a Menu.” Improving app discovery, apps will appear in “all relevant subcategories depending on its various capabilities.” Google will use app descriptions and sample invocations “to map users’ natural search queries to the new task-based subcategories.” Google Assistant is adding a new speaker-to-phone transfer API. It will allow experiences that start on Google Home to continue on a phone. One example shows users being asked by a speaker to complete an order on their phone so that they can confirm and see more details, like a bill.

Assistant apps will soon be able to remember select information and user preferences. Other capabilities include the ability to send users a reply after they say cancel, as well as better-timed prompts (not just at the beginning) to ask users to link their account. 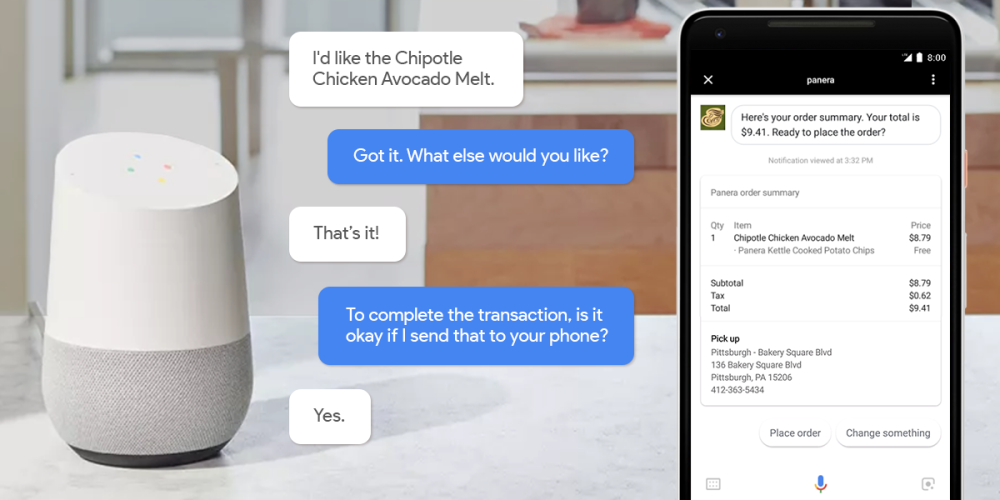 The last changes expands the Daily updates feature that we previously covered to get day-to-today reminders on weather or quotes . Third-party experiences will soon add a suggestion chip so that users can sign-up for daily updates.

A new push notifications API will allow apps to push asynchronous updates that appear as alerts in the system notifications on a phone, and later Assistant speakers like Google Home. Lastly, developers gain access to updated analytics tools with stats for app ratings, page views, and initiated conversations.