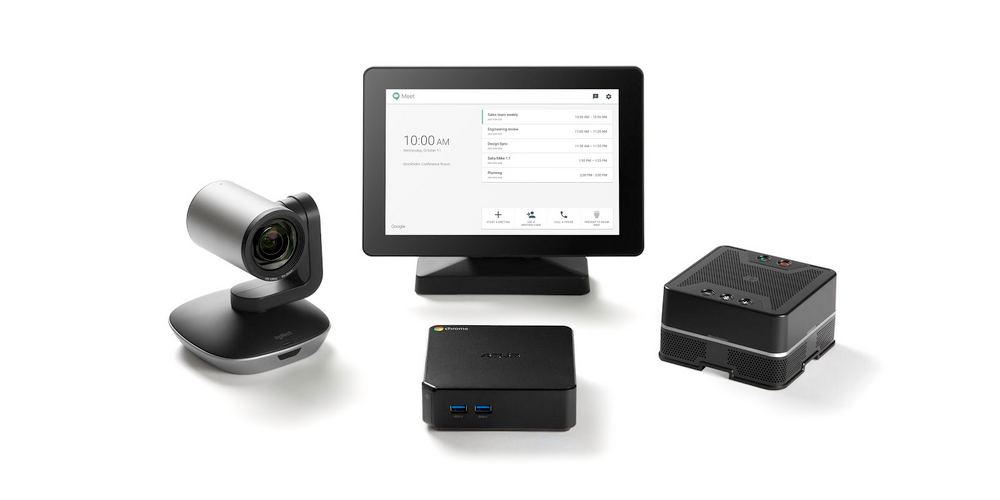 Last October, Google launched dedicated hardware for its Hangouts Meet video conferencing solution. Today, it is adding an option to support larger rooms, while launching in more countries, along with Jamboard.

Hangouts Meet hardware includes an ASUS Chromebox, but adds a new touchscreen display for viewing meeting details and controlling equipment. Google also designed and built its own speaker mic that intelligently reduces echoes and manages background noise. Up to 5 units can be daisy changed together for bigger rooms.

Today, this bundle is adding a new room kit that is suited for up to 20 participants. Featuring the Logitech PTZ Pro 2, it allows for 10x optical zoom, as well as panning and tilting. Additionally, it is rolling out to Denmark and the Netherlands, with Hangouts Meet hardware now available in 14 countries.

As part of this rollout, Jamboard is adding an AutoDraw feature that leverages machine learning to automatically replace scribbles with stock images. Google demoed this feature last year as a fun web app.

This gives teams the ability to make their ideas even more visual—whether you’re a creative designer working with clients or even a teacher working with students.