Comparison: How does the dbrand Grip hold up against RhinoShield’s CrashGuard bumper case? 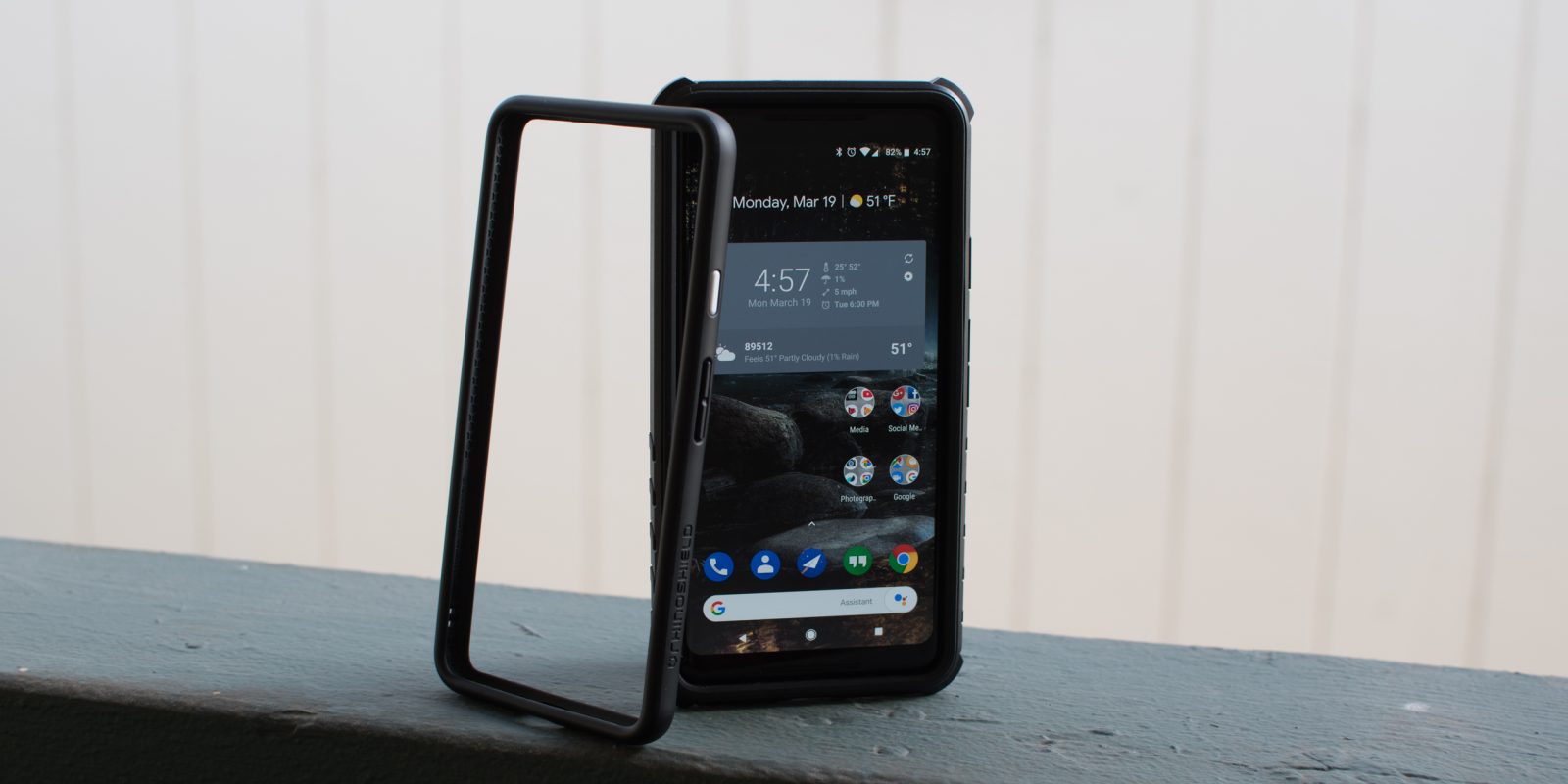 Late last year, dbrand introduced the Grip, a bumper case that promised to make your phone ultra-grippy. With the Grip now shipping to customers who backed the product on Indiegogo, let’s see how it stands up against one of the most popular bumper cases on the market: the RhinoShield CrashGuard.

The RhinoShield CrashGuard feels very much like most cases on the market. It’s made out of a custom polymer that feels kind of plasticy (but not in a bad way). The bumper’s material does have a matte finish that’s supposed to keep it from being too slick, but it still slid a bit in my hand.

Internally, the CrashGuard has a “protective honeycomb structure” that uses “ShockSpread technology” to protect your device from drops as high as 11 feet. While I haven’t tested that claim, I can say RhinoShield’s bumper did shield several of my phones when dropped from waist height onto concrete in the past.

On my Pixel 2 XL, the case felt secure, but I was able to flex the left and right sides away from the phone itself if I put too much pressure on them. Besides that, the CrashGuard feels like any other bumper case. That isn’t bad, but it doesn’t help it stand out in a crowd.

The thing that makes the Grip unique and gives it the grippy nature is the use of the D3O material. People have already made videos explaining what makes D3O different so I won’t waste your time telling you about it. Instead, I will let you know why I, personally, like having this grippy material over a plain plastic shell.

So as you can see from the photos, dbrand has placed the D3O material on all four corners of the case to absorb impacts. Added accent pieces on the left and right sides also help you hold the phone, with the front and back side edges helping keep the entire package from sliding off of surfaces when placed down. Even the inner lining helps protect the device from drops.

While I haven’t had the case in hand long enough to see this, dbrand states that the D3O material will only get better over time. In addition to forming to your hand from holding the case, it claims to also be more grippy.

There are several drawbacks to that grippy material, though. In my time with the bumper, I have found that lint and other small debris like to stay on it. The other thing is getting the case in and out of your pockets. I don’t wear skinny jeans, but I did find myself having to work the case into my pocket because the D3O material kept gripping onto the inner lining.

In between the inner D3O lining and the pieces facing outward, is a carbon composite material. While it also feels plasticy, this frame is what gives the Grip its rigid frame. And although it is made up of a mix of carbon fiber and plastic polymers, it shouldn’t interfere with your phone’s Wifi, Bluetooth, cellular network, or any other types of signals.

If there was one change I’d like to see in a next-generation Grip, it would be to have some of the D3O accent pieces on the bottom edge of the case. Most people with large phones typically hold up their phone with their pinky finger at the bottom and the D3O material as it is much softer than the carbon composite frame.

But as I said above, they’re really loud. Compared to other cases and even just the phone, the Grip makes double the noise. While I found this excellent as a fidget toy alternative, it might annoy some people.

With the RhinoShield CrashGuard, I was honestly unimpressed with the buttons — especially compared to the Grip. Most likely due to the replaceable nature of the button (more on that below), the power button just felt loose and rattled around. The volume buttons were alright, but they did tend to be on the more mushy side of things.

On RhinoShield’s website, the company claims that it has taken steps to ensure that the USB and headphone jack (when there is one) is fully accessible. This means keeping the slot above the I/O wide and shallow enough to accept almost every accessory.

With the Grip, dbrand includes a 3.5mm adaptor with its bumper case for phones with headphone jacks (and the Pixel 2 XL). As the case appears a bit thicker over the port, the company most likely wanted to make sure user’s music accessories still worked.

I should note that I tested both bumper cases with a handful of USB-C cables that I had laying around to make sure neither case had any issues. I checked Google’s OEM cable for the Pixel 2, one from OtterBox, another from Belkin, and even the charger for my Pixelbook. Those all worked flawlessly with both cases, but I did have trouble getting Anker’s PowerLine+ cable to connect fully while using the dbrand Grip.

As you’re most likely aware of at this point, dbrand is known for its smartphone skins. These, using an adhesive 3M material, let users customize the look and feel of their smartphones. And while these protect devices from small dings and scratches, they aren’t enough protection for those who would normally have a case on their handsets.

But because the skins wrap around the edges of the phone, using them with cases is nearly impossible.

With the Grip, dbrand is going to be selling specially-cut skins that will work with its bumper case. This means that in addition to protecting the phone from drops with the bumper, skins will be available to protect the device’s rear from scratches since the Grip leaves it open to the air.

RhinoShield, on the other hand, produces its own tempered glass and plastic screen protectors as well as back skins to help protect devices. Unfortunately, for devices like the Pixel 2 XL that I’m testing these bumpers with, the back skin is unavailable.

Additionally, if you want to add a bit of flair to your CrashGuard, the company lets you replace the bumper’s power button with a collection of different colored options.

But if the CrashGuard doesn’t fit your style, RhinoShield does make several other cases that use the same type of material and technology to protect your device. Additionally, with the purchase of an insert, you can mount the company’s different camera lenses to the other cases.

At the end of this, there isn’t really a clear winner. RhinoSheild’s CrashGuard is a tested product that I’ve used on a dozen or so devices because it works and it has protected several of them from pretty significant drops. Yes, the bumper is pretty plain and looks standard in today’s case market, but that might be what you’re looking for in a case.

The dbrand Grip is obviously the newcomer in the case market, but the company comes out swinging partially thanks to its years of smartphone accessory experience. And unlike old case makers that keep the status quo, dbrand is using a new material in a way that protects your device better than a plastic shell as well as providing more grip.

If you’re interested in the RhinoShield CrashGuard, you can pick it up for almost any device on Amazon or the company’s website for around $25.

At the time of this writing, dbrand is still distributing the Grip to Indiegogo backers and isn’t accepting any new orders. I’m sure as soon as the company is done with this task, dbrand will begin selling Grip through its website for old and new handsets. Prices haven’t been officially announced, but based on the Indiegogo backer tiers, it appears as though dbrand values the Grip + skin at $60.

Are there any other cases you want us to compare the Grip to? If so, make sure leave us a comment below and hit me up on Twitter.