Report: Google leading push for open wireless spectrum that is coming as soon as this year

Wireless spectrum in the U.S. is always in demand, especially as carriers prepare for the impending launch of 5G networks. However, a significant chunk of airwaves are becoming available this year, with the potential to open up the industry. Google is leading the push and positioning itself to take advantage, possibly becoming a big player in the process.

Bloomberg today detailed Google’s efforts to make use of the Citizens Broadband Radio Service (CBRS). Historically used by the military and restricted to communications between things like Navy carriers and aircraft, it will be opened to the public later this year.

The military is still using the spectrum, but it will now be split into three tiers. The first belongs to the military with priority access, while the second can be bid on and purchased much like spectrum today. Bloomberg notes “mini auctions” across the country for hundreds to thousands of areas.

However, what’s notable is that when the spectrum isn’t being used by the owner, it’s free to use by other parties. This aspect goes hand-in-hand with the third tier of CRBS that is open for anybody to use. Possible other uses for it are as a Wi-Fi replacement for hospitals and other businesses. 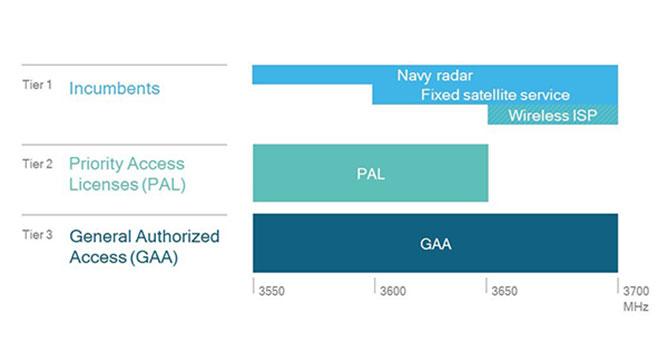 Google is spearheading and leading this third tier. Hand-off — that’s not too dissimilar to how Project Fi’s network switching technology works today in principle — is another key part of this technology, as Bloomberg describes:

Imagine you’re on a call with your smartphone in Los Angeles and it’s using CBRS to connect you. An aircraft carrier churns past. Systems run by Google, startup Federated Wireless or a few other companies, will spot that, give the Navy a prime bit of the spectrum to use, then move you onto a slightly different channel without dropping the call. When the ship leaves the area, the Navy’s spectrum is sent back into the mix.

Google’s role is as a Spectrum Access System provider that determines when to give priority to Navy ships, and then switching over consumers to other channels as to not disrupt the military uses. The company has already installed sensors around the coastal United States to detect when Navy ships are near.

Today’s report notes that this effort is being led by Milo Medin. The longtime Google executive was previously described as the “chief advocate” behind Google Fiber, as well as other experimental wireless projects.

Besides Google, there will be a host of other startups serving the role of SAS. Commercial uses of CBRS are expected to go live later this year, with the third tier likely getting FCC approval first. Meanwhile, big U.S. carriers and ISPs are already testing the technology, while Verizon is instructing smartphone makers to include the necessary chipsets capable of switching and supporting the spectrum.