Google app 8.0 revealed several features in development for Assistant like training “Your People” and Custom Routines that could run on a schedule. We’ve now managed to enable a number of new interfaces and other functionality in version 8.0, including a bottom bar redesign and the upcoming Collections feature.

Last week 9to5Google enabled an updated look for the Google app that was rather reminiscent of all the talk about “Material Design 2” recently. Version 8.0 amplifies that new design direction even further as evidenced by a new bottom bar that features new icons and a reorganization.

The Assistant shortcut is placed in an interesting circle, while there is new icon for Recent, Collections, and More. All the refreshed icons look particularly modern compared to Google’s existing designs. Meanwhile, this new bar is persistent even when viewing Feed articles or clicking to a link from Search results.

Elsewhere, the More tab has a visually interesting new dialog box for updating; complete with rounded buttons and a thin outline. This interface is still very buggy. For example, note how in some screens the Assistant shortcut switches to the Upcoming tab.

Another novel aspect of the new bottom bar is how the Recent tab features a count of just viewed items. Visually buggy at the moment, we noticed how the number in the middle updates as we open more items. As is, this feature is likely underused by most people, but it’s interesting to see how Google is giving it priority.

Also gaining more priority this version is the new Collections feature that serves as an upgrade to the existing Saved. With the new name comes central placing on the bottom bar instead of being relegated to the fifth “More” tab menu.

Up top is a card-based carousel of “Last added items” with the domain, preview image, description, and a small note about where it was saved. Underneath are the user-made groupings with the ability to create new ones. Overall, this interface is much snappier and maybe will be adopted by more users to save links and images.

Assistant gets another new keyboard icon which returns to being slightly more realistic, while Lens gets a slightly modified onboarding process with a rounded bottom card versus the earlier text bubble interface.

Given how smart displays will support Duo, there is a new setting to set up video calls for those new class of devices under Assistant settings.

As a follow-up to what we last enabled, we have another look at the rounded Google bar at the top of search results. Due to the rounded design, which recently appeared throughout Google’s apps and even Android P Settings, the category filters are now placed just underneath.

As we noted in a previous APK Insight, users will soon be able to use the Google app to search for Personal Documents. We’ve manged to enable this feature for finding “PDFs and other documents on your device” while several of the personal search icons have received a minor revamp. 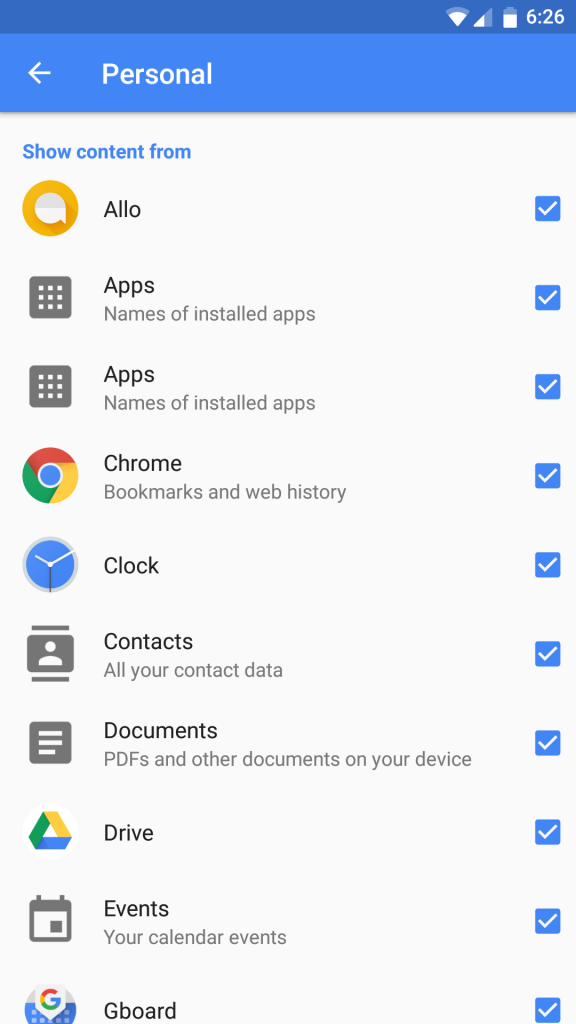