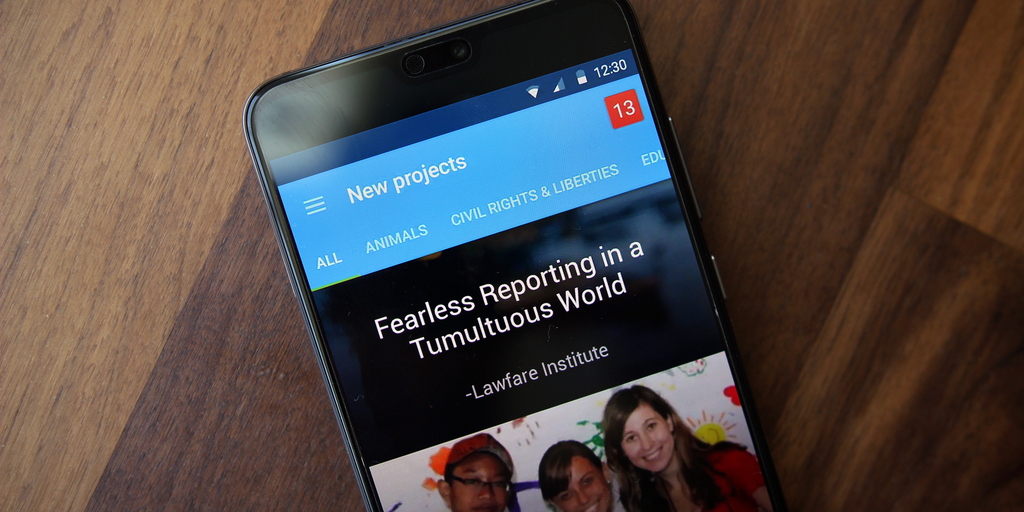 Google I/O 2018 kicks off next week, and now we’ve managed to get our hands on a new app icon for what we believe could be an entirely new version of a Google app you’ve probably never heard of: One Today. All we have is the icon for now, but a dramatic refresh of an app icon design like this one could point to a full revamp of the app itself — especially since it’s one that’s long been forgotten…

Basically, One Today lets you easily find and give to charitable organizations that have signed up through Google for Nonprofits. You can choose the initiatives and categories of charity that matter most to you, and the app will give you a daily featured project and let you match other donors or just give whatever you want.

The app also lets you browse through all of the projects Google has partnered with, quickly visualize your donations and impact, and “rally people to be generous and feel good” by paying it forward and giving others some funds to donate with.

It’s a pretty straightforward app, but it has two problems: It’s getting really outdated with an old hamburger menu and tabbed design that looks straight out of the days of Lollipop (it hasn’t been updated on the Play Store since 2015), and it’s relatively unknown among the majority of Android users. It’s a great altruistic initiative and one that Google clearly hasn’t abandoned yet, but it could definitely use a breath of fresh air.

And that’s what might be happening. The new app icon that we’ve obtained, simply titled “One” (rather than “One Today,” maybe it’s getting a rename too?), ditches the big drop shadow and blue for a brighter colored icon that embraces the four Google colors. And no, it’s probably not an icon for “Android One,” unless Google for some reason has plans to introduce an app specific to those phones.

The other possibility is that this could be for an entirely unrelated new Google app called “One,” but to us a refresh of One Today seems most likely.

The timing of this suggests that this might be one of Google’s announcements for next week, but Google hasn’t exactly been set on keeping announcements on keynote day — many announcements we would have expected next week have come this week, for example.