Last April, Waymo launched an Early Rider program in Arizona to let the public experience self-driving cars to get to places. Ahead of a commercial launch, the Alphabet division has detailed what it’s learned in a year about operating an autonomous ride service.

To date, Waymo has received 20,000 applications to take part in the Phoenix Early Rider program. Kids as young as 9 to people as old as 69 have ridden in the self-driving Chrysler Pacifica hybrids, with nearly 400 daily riders in the Phoenix area today.

Our applicants come from all corners of the community: senior citizens, high school students, families with young children, people living with disabilities or without a driver’s license. All said they wanted to try truly self-driving technology, and many mentioned their hopes for a future of safer streets and roadways.

The destinations are not too different from Uber or Lyft, with people heading to work being the most “popular trip” taken by early riders. This is followed by restaurants, schools, and bars. Other reasons include shopping and getting groceries, while one particularly amusing trip is to car repair shops.

During trips, people have taken to doing “homework, catch up on emails, read books, or even just daydream and check out the local scenery.”

Meanwhile, testimonials on why people are using the Waymo service are similar to those of more conventional services. There are people who are adverse to driving themselves, those who don’t want to drive, and busy families who occasionally need another ride. 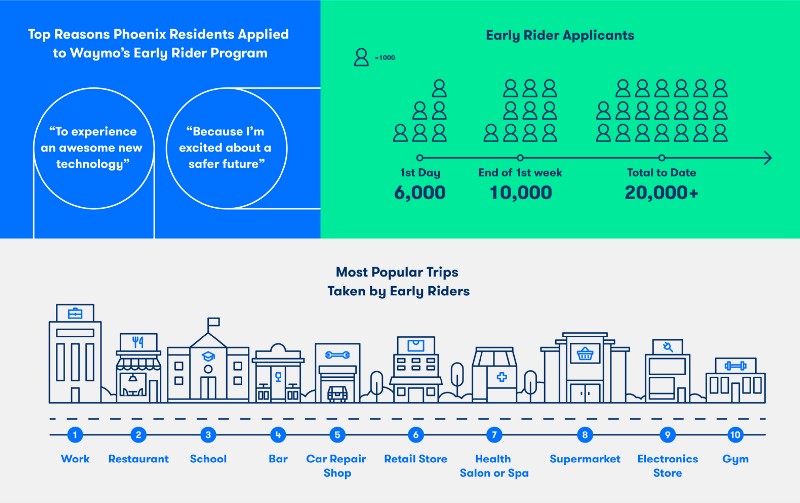 A year of feedback notes that people want closer pickup and dropoff points, with Waymo working to get vehicles as close as possible to the best exit doors. The company also wants to make it easier for riders to ask questions and get assistance from inside the car or via the mobile companion app.

During the program, Waymo has also had to work on how to gently wake up napping riders once the vehicle has arrived at the intended destination.

Waymo is still taking applications for the Early Rider program in Phoenix. The consumer service is expected to launch soon, but the company has yet to detail when exactly that will occur.