Nearly two years ago, Google was teasing its October 4th event as something we’ll “remember 8 years from now.” Lately, Google’s Pixel 3 has been leaking left and right, and now, it seems likely that the company will yet again be launching its new flagship smartphone on October 4th.

YouTube’s branded content platform, Famebit, is an easy way for brands to directly work with creators on projects and advertisements. For the Pixel 3’s launch, Google has apparently decided to use Famebit to pull in some local influencers in the Canadian market as first spotted by This is Tech Today (via Android Police).

An ad posted to Famebit, allegedly by Google, seemingly confirms that the company will be hosting an October 4th event to launch the Pixel 3 and Pixel 3 XL. That date really doesn’t come as a surprise given the company’s previous events for the Pixel and Google Home in 2016, as well as the Pixel 2, Pixelbook, and Home Mini/Max last year.

Google is asking for Canadian creators to apply on Famebit for the sponsored deal to “share their story” with their audience regarding the Pixel 3/XL. This hints to some extent that Google could start selling the Pixel on the 4th this year, but that wouldn’t line up with what we’ve seen in previous years. 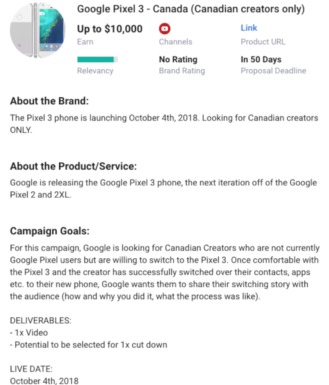