We’ve reported recently on a few issues with malware and shady apps from Chinese developers. The latest report comes in the form of a Google Play Store ban for CooTek after many of its apps were rendered nearly unusable due to invasive ads.

CooTek is the developer behind the wildly popular TouchPal keyboard and is actually listed on the New York Stock Exchange. The news was reported by BuzzFeed following an investigation by security research firm Lookout.

The investigation found that hundreds of CooTek apps used an invasive adware plugin call BeiTaAd. It was found that this plugin pushed ads much more aggressively to those who had it installed. The apps even pushed ads when the phone or app wasn’t being used.

Lookout has discovered 238 unique applications that include BeiTaPlugin, adware that renders a mobile device nearly unusable, in the Google Play Store. Lookout reported the malicious functionality to Google and the BeiTaPlugin has now been removed from all the affected apps on the Play store. Cumulatively, these applications amount to over 440 million installations, making this family unique in its prevalence and the level of obfuscation used to hide the plugin’s existence.

Ads were so aggressive that in some cases, it would “render a mobile device nearly unusable,” according to Lookout researcher Kristina Balaam. She also said that those with the offending apps installed “have reported being unable to answer calls or interact with other apps, due to the persistent and pervasive nature of the ads displayed.” 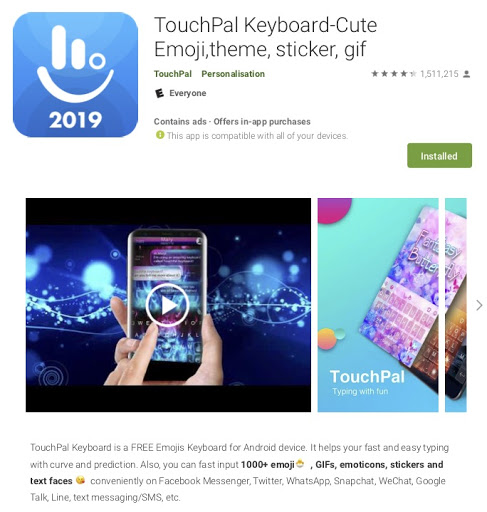 A spokesperson for CooTek told BuzzFeed that it would remove the offending BeiTeAd plugin that was deemed responsible for these very intrusive ads. BuzzFeed and Lookout found though that many of the updated CooTek apps on the Play Store still contained the code that caused the issues to begin with. However, CooTek said updated apps should have resolved the issues.

“There was not any re-engagement on the ad activity pointed out by Lookout on any of the versions which we updated,” CooTek spokesperson Mina Luo told BuzzFeed via email. “The findings claimed by Lookout this time are lack of evidence and the logic is not convincing.”

Google has since confirmed the initial Lookout findings and told BuzzFeed: “Our Google Play developer policies strictly prohibit malicious and deceptive behavior, as well as disruptive ads. When violations are found, we take action.”

Many of these recent reports and issues with Google Play Store applications do not paint Android and security in a positive light. That said, often, Google is quick to remove shady developers from the Play Store if concerns are raised.

There seems to be a bit of an issue with shady developers and developer practices at the moment, and this latest ban highlights the issues that we as Android fans have to deal with when navigating the Google Play Store. It’s definitely an issue that Google needs to get a better grasp on.

Our advice would be to steer clear of CooTek apps for the foreseeable future — although all have been removed from the Google Play Store. If you want to see if an app you’ve installed is affected, then head to this link.