On July 16th, 1969, NASA successfully launched a mission to bring astronauts to the moon, and 50 years later, we’ve just passed the anniversary of that historic event. To celebrate, the US Navy has developed a new Google Assistant game called “Journey to the Moon” which plays real audio recordings and takes you through the process of the lunar launch.

Available now, “Journey to the Moon” takes players through a series of multiple-choice questions that determine which role is right for them: Power & Propulsion, Flight Control, or Crew Survival. Actual recordings from Neil Armstrong and other members of the Apollo 11 mission are played throughout the game as players try to answer questions correctly and take the crew to the moon and back.

To get started, say “Hey Google, speak to Journey to the Moon.” The game will be available starting July 19th through August 17th.

A career in America’s Navy can you take you many places. 50 years ago, it took Neil Armstrong to the moon. Play Journey to the Moon to determine your place in Mission Control, listen to real audio recordings from the moon landing and make high-pressure decisions to get Neil and his crew to the lunar surface. Can you make sure the greatest moment in our history actually happens? 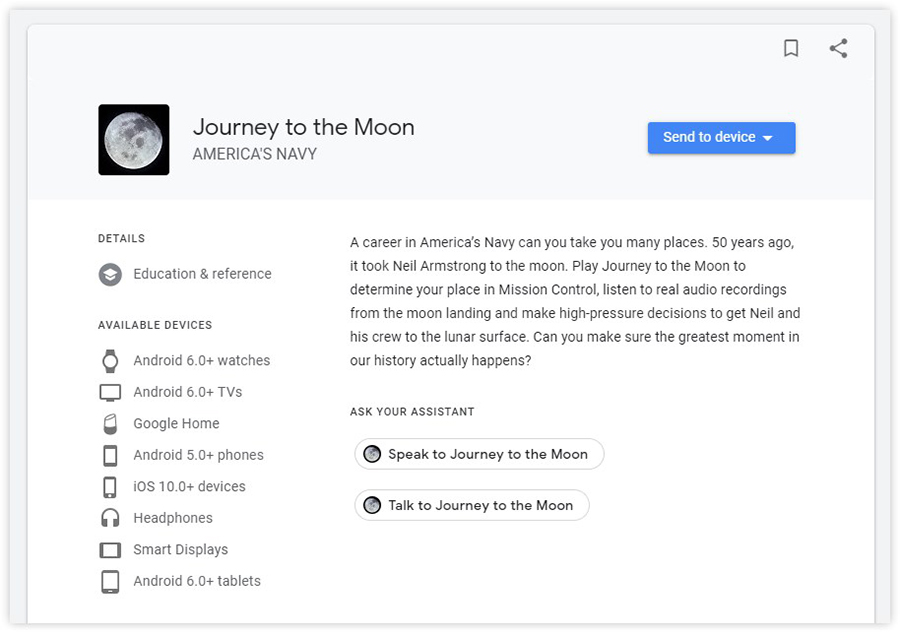