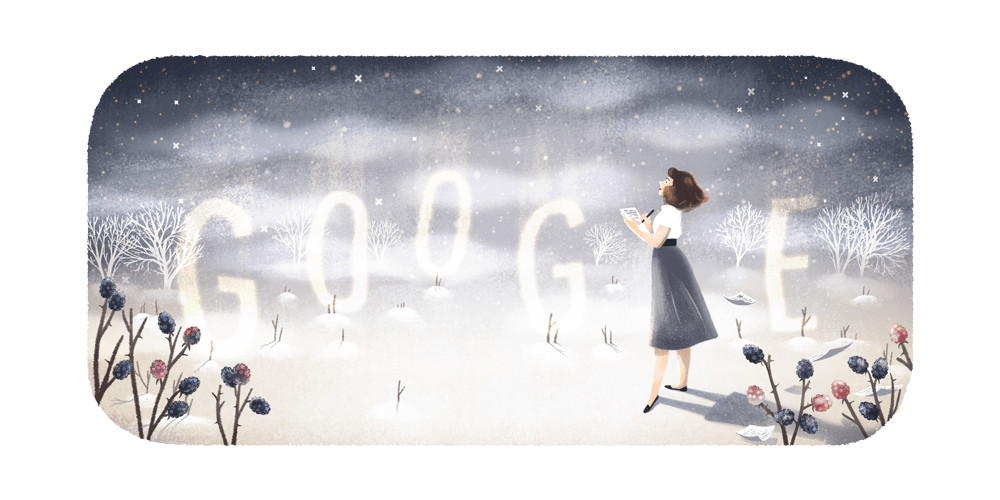 This morning’s Google Doodle is celebrating the work of American writer Sylvia Plath, whose candid, exacting poetry and novels have resonated with the hearts of multiple generations.

Sylvia Plath was known as one of the leading contributors to the genre of “confessional poetry,” in which writers open their heart to others by composing honestly about deeply personal matters, including mental health and depression. While as a society we’ve finally begun to be able to open up to each other about these issues, speaking or writing publicly about such things in Plath’s time was considered taboo.

The Doodle shows Sylvia Plath with pen and paper in hand, surrounded by an icy winter landscape. This acts as a strong metaphor for the style of her poems, which have been best described “as if they’ve been chiseled, with a fine surgical instrument, out of arctic ice.”

Today’s Doodle was contributed by frequent Google Doodle artist — or “Doodler” — Sophie Diao, who found personal inspiration in Sylvia Plath’s spirit. According to an interview with Diao, rather than referencing specific poems or passages, the Doodle is meant to evoke the overarching mood of Sylvia Plath’s works. By this author’s eye, that mood appears to be a somber sense of beauty.

I think I had always been aware of Sylvia Plath, but the first time I read her work was the summer after my freshman year of college. I find her work very empowering, and I really admire how hardworking she was. Writing almost every day, while being a homemaker and mother, and organizing her and her husband’s finances, and applying for grants and fellowships… she was clearly a strong-willed enthusiast.

Elsewhere in the world today, Australians are enjoying a doodle celebrating Grandparents’ Day, while those in Argentina are given a friendly reminder that today is election day.