How to improve your internet connection for Google Stadia

Before we can dive into the different methods you can use to improve your connection, let’s take a second to discuss the two main attributes of your network that can affect Google Stadia or introduce lag.

The first is your download speed, or how long it takes to download files. Your download speed determines the maximum resolution that Stadia can run at, ranging from 720p all the way to 4k. Generally speaking, Stadia needs a minimum of 10Mbps for 720p, and 35Mbps for 4k.

The second thing you need to know about is your ping, or how long it takes for a message to be transmitted from your computer to a server and back again — meaning lower is better! Having a lower ping makes Stadia’s controls more responsive, as in less time between pressing a button and seeing a change on screen.

With that in mind, here are some handy ways to improve your connection to Google Stadia.

Seven ways to improve your connection to Google Stadia

Use Ethernet when possible

One of the best things about Google Stadia is the promise that you can play from anywhere that you have WiFi. However, WiFi comes with its own challenges, like distance from the router and interference with the wireless signal. Even under the best circumstances, connecting via WiFi adds a small layer of extra delay to your ping.

The developers of League of Legends did an in-depth analysis of the differences between players on a wired and wireless internet connection. From the data, they found that using WiFi on average adds over 8ms of ping. That may not sound like much, but every little bit counts.

Additionally, depending on how old your router is, you may find that a wired connection also has faster download speeds than a wireless one. If it’s at all possible, you should consider connecting your Stadia devices to Ethernet, but this is easier said than done for some devices. For example, the Chromecast Ultra allows you to very easily connect an Ethernet cable to the power adapter. On the opposite side of the spectrum, there are Pixel phones, which don’t offer much of a way to connect via Ethernet without a separate adapter which would make Stadia far less portable.

If using Ethernet just isn’t possible for your device or home setup, you can still make wise decisions about your WiFi connection. If your router offers both 2.4GHz and 5GHz options, as many newer routers do, be sure that your Stadia device is using the 5GHz network.

The main reason for this is because the 2.4GHz spectrum is more likely to see interference both from other WiFi devices and from unrelated electronics like cordless home phones. Meanwhile, the 5GHz spectrum typically sees much less usage in the average household, meaning less interference and an improved internet connection for Stadia.

Some routers will tag the WiFi network name with “5G” or “5GHz”, while others simply combine the 2.4GHz and 5GHz networks under the same name, allowing each individual device to automatically decide which one to connect to.

Google themselves also know that gamers will be looking to improve their connection to Stadia to maximize the experience. To help achieve that goal, they’ve added a “Gaming preferred mode” to their newly released Nest Wifi routers. 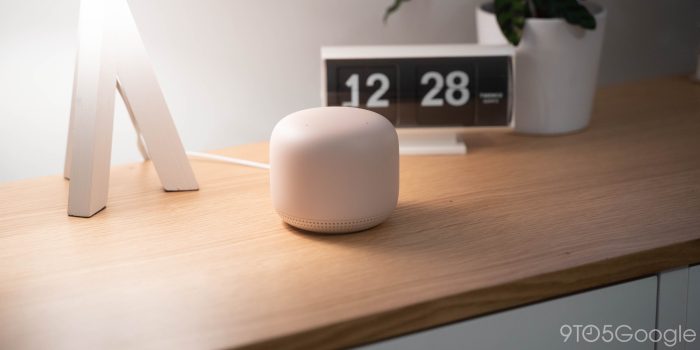 Simply put, “Gaming preferred mode” tells Nest Wifi to give any Google Stadia connection priority over other devices on your network. This means that your family members streaming Netflix or Disney+ in the other room won’t drag down your Stadia stream quality, and it should also have a positive impact on your download speed and possibly even your ping.

If a Nest Wifi is a bit out of your budget, you may still be in luck. Many (but not all) consumer routers offer a similar way to prioritize one device over another.

What you’ll want to do is dig through your WiFi router’s settings to find “QoS” or “Quality of Service.” Precisely how you’ll need to change the settings will vary depending on your specific router, but the process is generally to pick your most common device(s) to play Stadia on — such as your Chromecast Ultra or Pixel 4 — and indicate that it’s a high-priority device.

On some networks, this will make a huge difference, but that isn’t always the case. In fact, some routers, like those from Netgear, can actually perform worse once QoS is enabled. If QoS is enabled by default on your router, you may also want to test your Stadia connection with QoS disabled, as this may actually be better.

While there will certainly be some who do not consider this an option, another way to potentially get better ping to Google Stadia is to lower your video quality setting. Yes, you’ll be sacrificing the higher resolution, but if your network is getting overloaded by the amount of data used for a 4K stream, dropping to a lower level may help things run smoother.

This is especially true if you’re playing on a Chromecast Ultra, using the Stadia Controller wirelessly. If your router and network are working as hard as they can to keep up with the 4k stream on your Chromecast, your Stadia Controller may occasionally struggle to get its button presses through. 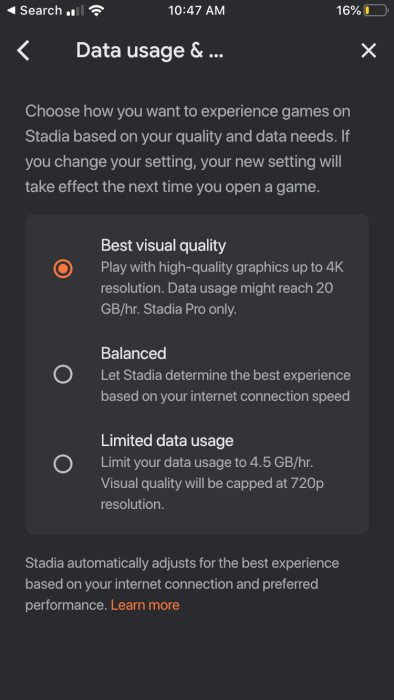 In the Stadia app’s settings, you can select between three data usage options — Best visual quality, Balanced, and Limited data usage. If you’re experiencing any unwanted input lag, try switching to a lower option to see if that has an impact. While your graphics may not look as swell, the feel of smoother gameplay will likely make up for it.

Use Game Mode on your TV

While the majority of issues you may face when connecting to Google Stadia are related to networking, there is one other trick you need to do to improve Stadia on your Chromecast Ultra. Simply put your TV into Game Mode, which turns off all of your TV’s picture enhancements. With those enhancements off, your TV will more swiftly show each frame coming from the Chromecast, reducing your overall input lag.

The way to turn on Game Mode varies between TVs, so you’ll need to toy around with your settings to find the correct way. Alternatively, the Google Home app offers a way to automatically enable your TV’s Game Mode when your Chromecast Ultra detects that you’re playing Stadia. Note: Not all TVs are compatible with this option, so be sure you test it out before relying upon it. 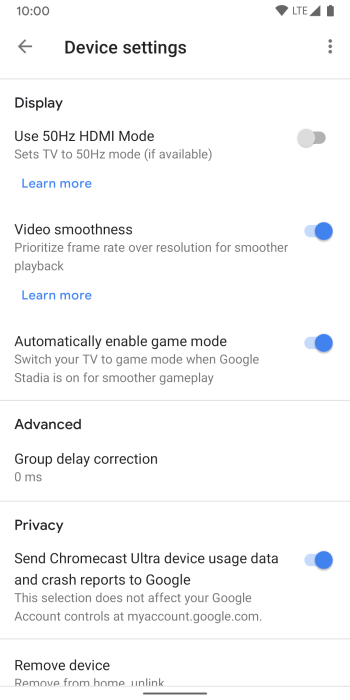 Simply open the Google Home app, tap your Chromecast Ultra, then tap the gear button in the top-right corner to open the “Device settings.” From here, scroll down to the “Display” section and turn on “Automatically enable game mode.”

Pay for a better connection

Finally, if it’s at all possible in your area, the best way to get a better connection to Google Stadia is to call your ISP and upgrade your internet package. Without switching providers, there’s usually not much to be done about improving your ping, but usually your internet provider will have a higher download speed package, which should help you get a consistent 4K stream.