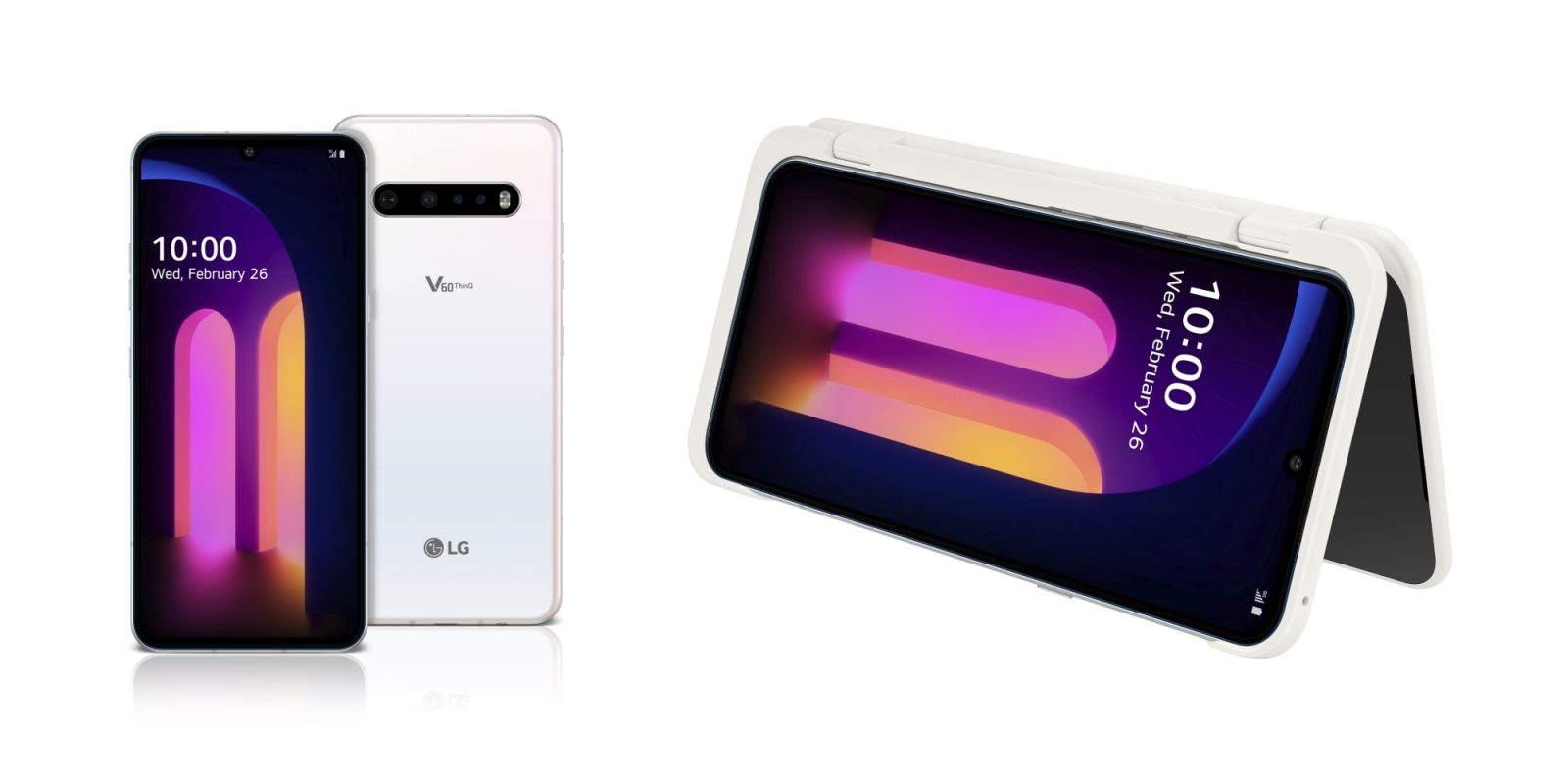 Today, LG announced the latest in their V series of Android enthusiast phones, the absolute mouthful that is the LG V60 ThinQ 5G, and gave some reviewers special early access to the phone to compensate for the cancellation of MWC 2020. From what we’ve seen in hands-on takes so far though, the LG V60 doesn’t improve enough on last year’s equally dual-screened V50.

LG has been floundering in the world of Android smartphones as of late, falling far from their heyday of making some of the top phones on the market. No doubt a big part of this is the company’s failure to deliver Android updates in what anyone could call a reasonable amount of time. LG is now seeking to redeem themselves by next year by introducing “wow factor” into their devices.

The only “wow factor” present in the LG V60 is its optional (but included) “Dual Screen” case which straps a second identical display to the phone with a 360-degree hinge, as also seen on the LG G8X and V50 before it. SlashGear notes in their hands-on preview that “identical” here means that the V60’s second display also has a teardrop notch despite not hiding a camera within.

The exterior of the Dual Screen case features a third, smaller “cover screen” on the front, usable as an Always On Display to make the time, your notifications, and more visible at a glance. Meanwhile, SlashGear likens the rear of the case to the Google Pixelbook Go’s ribbed underside, making for an easier grip.

As LG’s Dual Screen phones make use of the USB-C connector to transmit the video and touch inputs, charging the LG V60’s massive 5000mAh battery while in its case requires a magnetic adapter. Android Police notes that this adapter, unlike last year’s models, is reversible, making for quick connections at least. 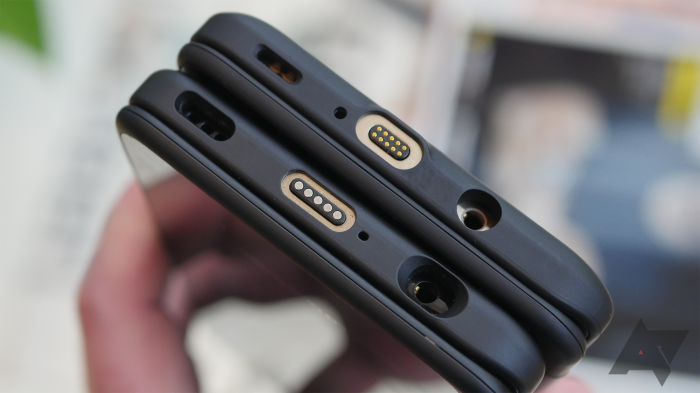 For now though, having a second screen is still only useful for certain tasks. The Verge particularly praised the LG V60 in their hands-on for its ability to run two apps side by side, making the phone “the ultimate Uber / Lyft driver command center.” LG’s Dual Screen devices have also carved out a few unique niches such as using the entire second screen as a gamepad or keyboard for whatever is on your primary screen. 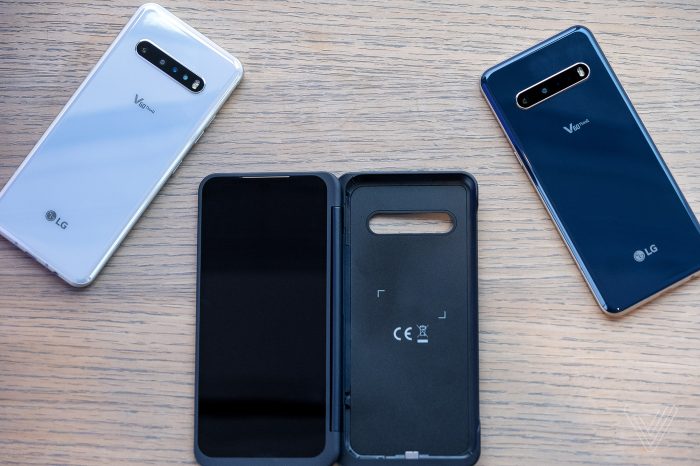 As it stands, though, not many apps are able to effectively make use of both screens simultaneously with most apps not supporting this capability at all. The Verge notes that at least some Google apps like Photos, Maps, and YouTube do support the LG V60’s cross-screen “wide view.” Doubtlessly, this year’s release of the Microsoft Surface Duo and Android 11’s native support for foldables will only boost the legitimate uses for such a second screen in Android.

One unfortunate aspect of the LG V60 is that neither display supports running at 90Hz or more, which is a far cry from what is now expected from a flagship phone in 2020, as Android Central points out from their hands-on time.

But then there are those few shortcomings. The display is “only” FHD+ (2460×1080), but that really doesn’t matter; it’s the same resolution the Galaxy S20 series ships at despite being capable of QHD+. The bigger issue is that this is only a 60Hz display, which certainly dates it a bit, and there’s further question as to whether the display is, overall, as good as the Galaxy S20+.

Underneath the Dual Screen case, you’ll find that it hides a glossy glass back which definitely makes the phone look premium, but, as Android Authority explains, the new design doesn’t quite go far enough. 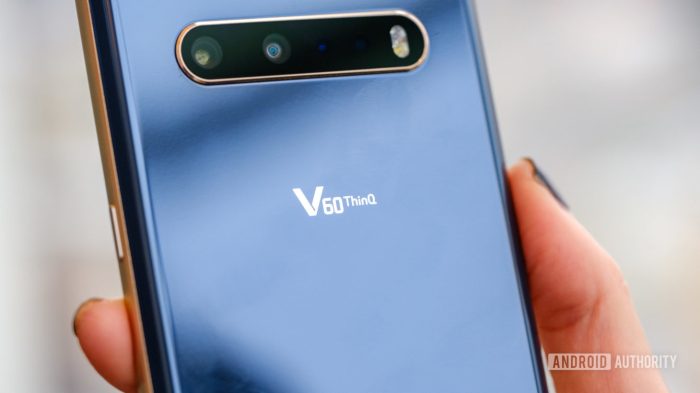 The LG V60 looks very similar to the V50 that preceded it, but it’s obvious that there have been some tweaks to make it a bit more stylish. The V60 has a glass back and chamfered edges that make it look a bit classier than the V50, and there are two new colors that both look fantastic. The phone now comes in Classy Blue, which uses a dark royal blue and a gold trim, or Classy White, which is pearlescent and has a silver trim.

While this isn’t a mind-shattering design change from years prior, this phone does look a lot nicer than other LG phones we’ve reviewed. While I’d personally like to see a total overhaul in design language, improvements are nice to see.

In the midst of that glossy rear is a pill-shaped camera bump with two camera sensors along with a time-of-flight sensor, used by a special camera mode to take 3D photos. A quick look at some camera samples from SlashGear shows that the LG V60 takes solid portrait photos, while the macro capabilities are decent, picking up small dust particles, but still leaving much to be desired.

All said and done, Android Central is still able to make a strong case for the LG V60 ThinQ 5G by simply reminding us all of how much the Galaxy S20 series costs for what it offers by comparison to the only somewhat more modest LG offering which should come in at a more modest price.

What pulls this all together and makes it interesting is that LG isn’t going to launch the V60 at an absurd price as it’s done with so many phones. The V60 is going to be under $1000, including the Dual Screen attachment. That places it at or below the price of the Galaxy S20, despite being sized like a Galaxy S20+ — and including the secondary screen accessory. We’ll be getting official release and pricing information for the V60 in the coming weeks, but knowing it won’t be over the thousand-dollar threshold is important.

For a sub-$1000 phone, the LG V60 ThinQ 5G makes a decent bit of sense for those who see the usefulness of blossoming technologies like foldable phones and 5G, but don’t want to suffer through the obvious fragility of phones made with foldable glass. Depending on the final pricing and the pricing of its nearest upcoming competitor, the Microsoft Surface Duo, LG may have a winner on its hands for an admittedly niche market.