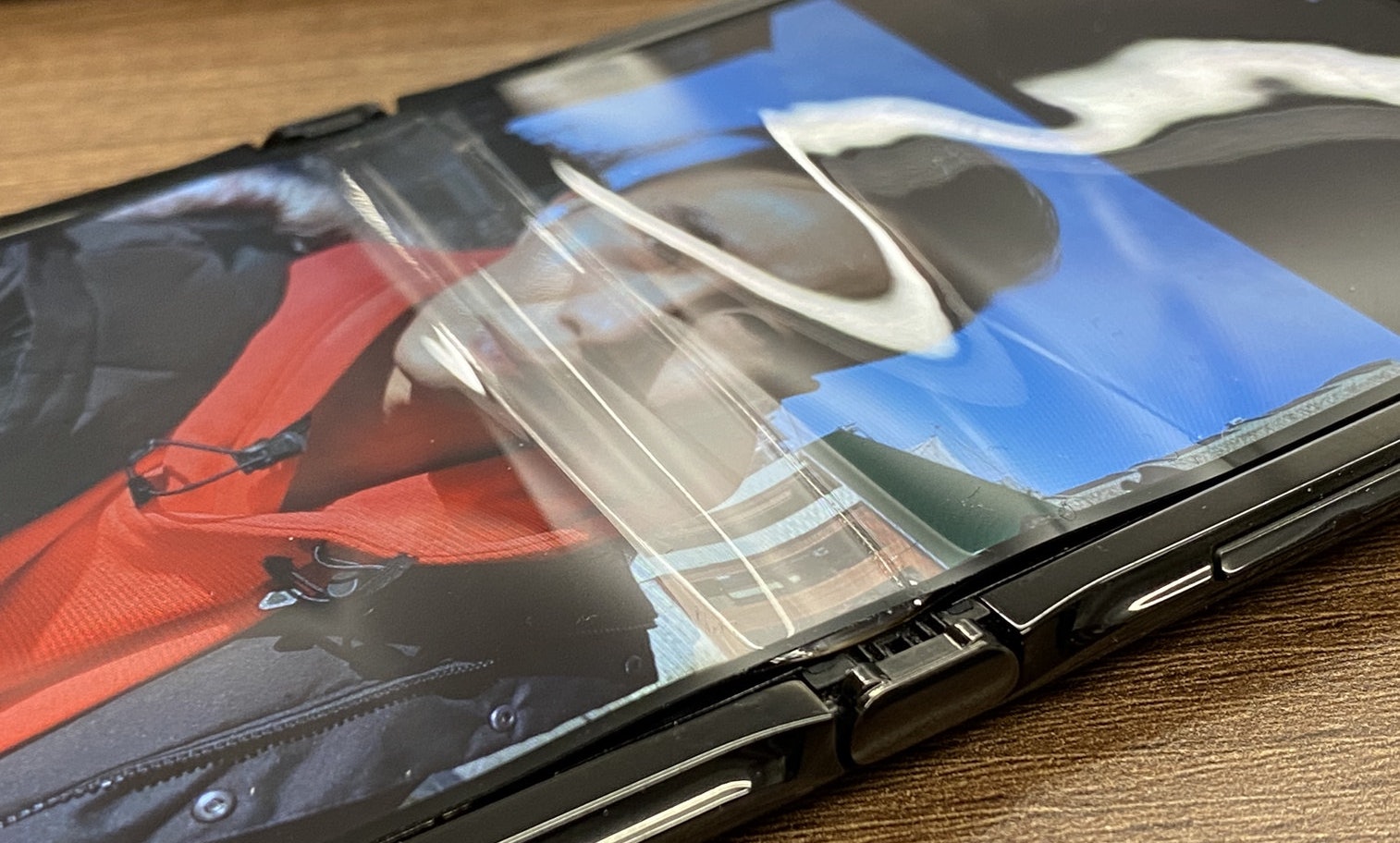 It looks like some foldable phones owned by tech reviewers are already breaking — and it’s happening for more people than just the one that intentionally abuses his devices. The latest events involve both the Samsung Galaxy Z Flip and the Moto Razr (2020), and it looks like there might be temperature-related causes for the maladies…

The first story to pop up over the weekend was about the Moto Razr of Input‘s Raymond Wong. He wrote about the flexible plastic already peeling up from the display of the phone, leaving not just cosmetic damage but functional damage to the warped surface. Just take a look at the photos he posted — they’re pretty gnarly.

While it’s too early to say exactly why his Razr is suffering the issue (as there are definitely Razr owners who have yet to see similar issues), his best guess is that it could be temperature-related. Perhaps an abrupt change in temperate in chilly New York City this past weekend caused stress on the display.

Your guess is as good as mine. The only reason I can think of is a change in temperature. I used the phone to snap eight photos yesterday. It was a freezing day with temperatures between around 28 to 30 degrees Fahrenheit when I was shooting with it.

Interestingly enough, Ray wasn’t the only one to report potential temperature-related issues with  a foldable phone over the weekend. On Twitter user and self-proclaimed tech addict also shared a photo of his Samsung Galaxy Z Flip over the weekend, which apparently cracked in half on its first fold. In this case, Amir apparently heard an audible crack as his phone snapped.

Just like Ray’s case, Amir only notes cold weather as the potential cause. I’m sure (or I’d like to believe) both Motorola and Samsung tested for this before they launched these devices, but instinctively I think most can imagine how it might cause these issues.

Received my Samsung Galaxy Z Flip just now. Opened the box. Removed the protective/instruction film. Flipped the phone as you would do since it’s a flip phone and this happened. I heard the crack as well. 😰 cold weather?#SamsungGalaxy #ZFlip #samsung pic.twitter.com/j8KLL2vm8d

We’re sure Samsung and Moto will likely chime in on both of these cases at some point, and it’s possible they were just freak accidents, but they still don’t inspire much confidence for buyers.

Regardless of what caused these issues, initial durability reports for both of these phones aren’t good. Just about every review of the Moto Razr noted poor build quality in its hinge, and just yesterday, JerryRigEverything noted that the Galaxy Z Flip’s display isn’t quite as “glass” as Samsung would like potential buyers of the $1380 device to believe.

On a positive note, it looks like the Galaxy Z Flip might get a higher repairability score than its predecessor the Galaxy Fold and the newly-launched Moto Razr.

What do you think about these latest issues? Are they enough to keep you away from these attention-grabbing handsets for a while?