Chromecast Buyer’s Guide: Which is the right model for me? [Video] 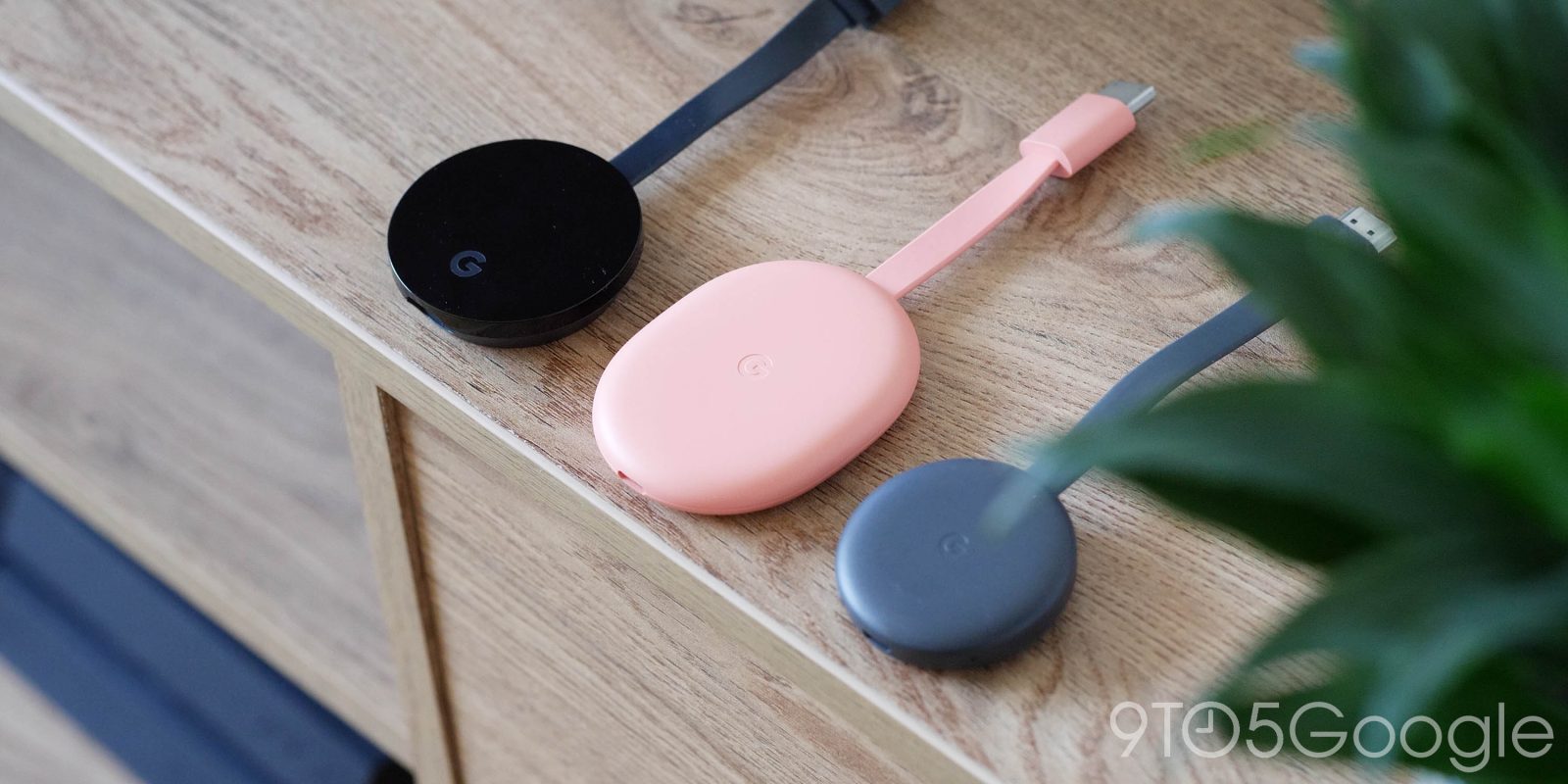 If you are looking to improve your home media setup and want a streaming stick or dongle, then you’ll no doubt be aware of the Chromecast series of devices, but which is right for you? Let’s simplify with our easy-to-follow Chromecast Buyer’s Guide for 2021.

Despite sharing the same name and having much of the same core features, not all Chromecast devices have been created equally. Much of that is owed to the various release cycles, but because of this, you might be confused as to which is right for you. And with a staggered pricing model, making the right decision is pretty important.

The Chromecast has been a truly pivotal product for Google. It was arguably the first successful product from the firm. While Android TV is undoubtedly the future of the Chromecast – completing an arc with the original Nexus Q – only one in the current lineup is powered by the OS at the moment.

The fight for your living room is an important one, but it’s a role the Chromecast fills very nicely. So let’s run through all of the differences so that you are clear about the strengths and weaknesses of each streaming dongle in this extended Chromecast Buyer’s Guide for early 2021.

What do you want from a media streaming stick?

Firstly, we need to assess what you want from your home entertainment setup. Are you looking for a complete home control system where all of your services live and are accessible by everyone in your home? Or are you happy to have a more freeform approach to watching and listening to all kinds of internet video, radio, and audio in general?

It’s important to try and refine or at least have an idea what you want to do ahead of time. A piece of Chromecast hardware might not even be the right fit for specific scenarios. Do you want to stream at UHD? Are you going to be the sole user or will there be multiple people accessing the device? Is gaming a major component in a streamer to you?

You’ll need to think about each of these, as while there is some crossover between each Chromecast within our buyer’s guide, some are better than others in specific scenarios.

There are currently three distinct Chromecast models in the Google lineup, but the Google Store only officially lists two. However, the Chromecast Ultra is sold in a bundle as part of the Google Stadia Premiere Edition — which confuses matters further for potential buyers out there.

Beyond screen or video streaming resolution, the big differentiator between the older Chromecast, Chromecast Ultra, and Chromecast with Google TV devices is an interactive UI. One of the biggest selling points of the older generations is simplicity. Just plug in and then connect when you want to watch TV shows, movies, and YouTube videos or listen to music, radio, and podcasts.

Google TV is bundled in with the newest Chromecast. This changes the entire product as a result but the core usability is still retained should you prefer that. If you have ever seen or used Android TV, then Google TV will be fairly familiar.

It’s a brand-new UI developed especially for the new Chromecast that is designed to surface new video content and based heavily upon recommendations. The system still uses streaming apps, but the main interface gives you recommendations and shows, plus “Trending” content from, in some cases, competing services such as Disney+, Netflix, Amazon Prime video, and more.

You can also sideload or download applications on the Chromecast with Google TV. It uses an Android-based system so the possibilities are quite expansive. There is a reasonably paltry 4 GB of onboard storage but you can expand that with a USB-C hub. If you are insistent on adding more applications, then we’d highly recommend doing so. It also allows you to add extra peripherals like keyboards, mice, and gamepads. This is not possible on the standard or Ultra models.

To put it in simple terms, the original Chromecast dongles do not come with a dedicated remote. You have to use your smartphone to connect to your device and then “Cast” the media. The Chromecast takes over the streaming process, while you can pause/play and skip from your smartphone. It’s all relatively simple and makes it easy if you have multiple people accessing your TV set.

A remote is provided with the Chromecast with Google TV for the very first time, which is one criticism that has been leveled at the product lineup since first being unveiled. You can still use your phone as a supplementary control method, but a dedicated remote does enhance the experience especially when navigating the interface.

While all Chromecast devices have Bluetooth connectivity, the Chromecast and Chromecast Ultra only use the wireless connection method during the setup process. The new Chromecast with Google TV allows you to connect just about any Bluetooth device. That includes gamepads, wireless keyboards, mice, and even speakers.

All Chromecast hardware can also be controlled using your voice with the Google Assistant. Voice commands can be used to play/pause, skip, and rewind content. This does become a two-step process for the Chromecast with Google TV though, as you’ll need to specify the device name when shouting commands — i.e., “Hey Google, play cat videos from YouTube on Google TV.”

Because the Chromecast Ultra is technically discontinued and can only be bought directly from Google as part of the Stadia Premiere Edition, it skews the pricing ever so slightly but does net you three months of Stadia Pro — usually priced at $9.99 or £8.99 — for free.

The basic 1080p-only Chromecast has a good $30 entry-point and is ideal for turning an older TV into a basic smart TV set. If you only watch some YouTube or maybe a little Netflix every now and again, it’s the best bet. If you consume a ton of online media from multiple services, the Chromecast with Google TV is among the very best streamers available as you can tailor it just how you want. It comes in under some of the competition at $59.99.

For gamers, at the moment, you’ll need to look at the Stadia Premiere Edition to game natively on your TV. Otherwise, you’ll have to sideload the Stadia Android app on the Chromecast with Google TV, which itself is a frustrating task. That said, it does work fairly well and lets you use third-party Bluetooth gamepads alongside the Stadia controller. You won’t be able to game at 4K though with this sideloaded app, even if you have a UHD TV.

Chromecast Buyer’s Guide: Which should I pick?

If you are a gamer who is interested in playing Stadia on your TV, at least for the moment, the Chromecast Ultra and Stadia Premiere Edition is an anomaly. Until a dedicated Stadia app for Android TV arrives, it is the only streaming dongle that natively supports the cloud gaming platform. Google has confirmed that the option will arrive before the end of 2021 though.

You can get comparable Android TV set-top boxes that, with the upcoming update, will resemble the Google TV UI and experience. One of the most popular alternatives is the Nvidia Shield TV, which includes some exclusive GeForce features and can even be used as an emulation box for your favorite classic consoles. You can achieve something similar with the Chromecast with Google TV, but a lack of CPU grunt might limit your options for playing certain 3D console emulators.

For just basic streaming of video from your phone to a TV, the entry-level Chromecast is superb for 1080p videos. There is no remote to lose, anyone can connect with the added benefits of a Guest Mode making it easy for friends and family members to stream their own content. Plus it’s simple with no real room for issues.

If you want a remote and more features moving forward, then the $59.99 Chromecast with Google TV is a no-brainer. The added expansion functionality turns it into a powerful little piece of streaming kit for your home, and it should supersede the Chromecast Ultra by some margin over time.