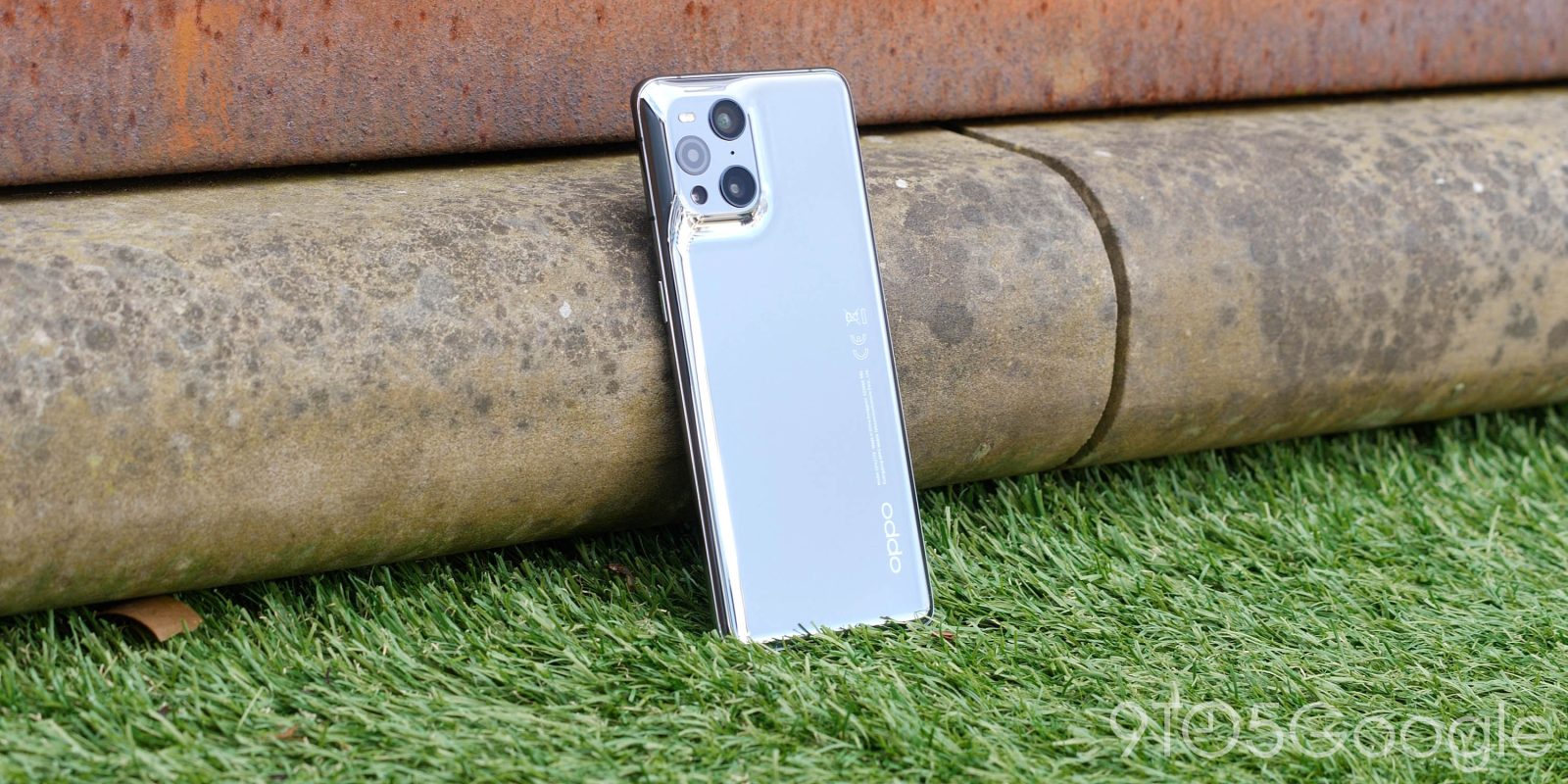 If you are to go out and get a smartphone in early 2021, the Oppo Find X3 pro should be a candidate. That’s provided you can stomach the entry price and it’s available in your region.

The Galaxy S21 Ultra set a high bar for smartphones at this early stage of the year. Oppo has followed up in borderline spectacular fashion with a smartphone that is easy to recommend at first glance, but there are some problems bubbling underneath the surface that ultimately mean it fails to live up to its sky-high price-tag.

The Oppo Find X3 Pro truly is top-notch in the hardware stakes. Oppo decided to create a glass backplate that smoothly transitions to the very iPhone-ish camera bump, and damn it looks good. Is it as nice as the orange vegan leather on the Find X2 Pro? Personally, I’d say no, but this is a real head-turning design and finish.

A unibody and glass design does allow for wireless charging, which is something I did miss on the previous model. I must admit that it’s slippery, which is something a case can fix, but you’re missing out on that rear panel shimmer on the mirror black finish. My colleague Ben was provided with the infinitely better-looking matte blue model — which is the one you should pick.

The slippery design isn’t helped by the weight of the Oppo Find X3 Pro. This is quite a heavy handset, or at least it is if you’ve come from a smaller device. That said, it’s actually lighter than the Galaxy S21 Ultra and many of its contemporaries.

There is a nice little green accent on the power button at the right, while Oppo has opted to go for individual volume buttons rather than a rocker. I can’t get behind the opposite placement, as it makes adjusting media levels a little bit annoying when using the phone one-handed, which is especially difficult on such a huge smartphone.

The undoubted star is the display yet again on this flagship Find smartphone. The bezels aren’t symmetrical on all sides, but Oppo has done a fine job. At 6.7 inches, it’s large and in charge with a maximum QHD+ resolution, which is pin-sharp at 525ppi. One notable here is that Oppo has opted to stick with Gorilla Glass 5 this time around and not the latest Victus that is said to be more durable.

Glass usage aside, it gets nice and bright with an on-paper peak brightness of 1,300 nits, so you’ll have no issues viewing all types of content in even the brightest conditions. The color calibration is superb, but I’m a sucker for saturated, vibrant colors when using my smartphone. I suggest turning that up in the device Settings to make the most of a gorgeous panel.

There are tons of options to play around with, which is always nice. If you want ridiculous colors then you can do it here. Oppo slapped an in-display fingerprint scanner on the Find X3 Pro too.

It’s in a slightly lower position than many other competitors, which sometimes makes unlocking a little precarious unless your hands are in the right position, but it’s fairly accurate and the animations you can choose are pretty awesome. I won’t say it’s the fastest I’ve used, but it does work at least 99% of the time, something many other in-display readers can’t claim.

ColorOS has grown on me in recent years, which is surprising to say the least. Older iterations felt hindered by overblown alterations and a desire to closely mimic iOS — something many Chinese OEMs are guilty of. The Find X3 Pro comes with ColorOS 11.2 pre-installed, and while it’s by no means perfect, it’s a great way to experience a third-party Android ROM.

My biggest gripes are mainly focused upon some of the UI choices rather than the actual usability of said UI. I detest the usage of full app icons in the status bar rather than the neater, cleaner line-style icons that we see across other OEM skins. The ability to change icon shape and size from the stock ColorOS system launcher is another great bonus.

There are a seemingly endless number of customizations you can make to areas like the Always-on Display, your home screen, and much more. I’ll stop short of saying this is the most feature-rich Android skin available, but along with MIUI tinkerers, you could lose hours making adjustments and alterations.

A couple of other ColorOS notables is the usage of the Google Discover feed on the home screen, plus utilization of the Google Dialer and Messages apps. This is nice to see. However, why can’t I double-tap to launch the camera app at any screen? The “draw and O” lock screen gesture is nice, but it’s far slower.

Because Oppo only offers the Find X3 Pro in one configuration with 12GB of RAM and 256GB of storage — a bump down from the Find X2 Pro — problematic performance is not something you’ll encounter. It absolutely sings thanks to the Qualcomm Snapdragon 888 with zero slowdowns to speak of. The 120Hz refresh rate ups the ante even further, with smooth, consistent animations upping the speed.

I love the haptics here, and I’d tentatively suggest they might be the best on an Android smartphone but sometimes notifications can be very faint or buzz for what feels like a millisecond. It’s not even every single app either, phone calls buzz while WhatsApp would often not. This is likely something that can be easily resolved with a software update, but we forsee some issues here in the long term.

While all of this is excellent, the fact that this phone is coming in at £1,099 here in the UK — or around $1,530 in eagle tokens — and is only guaranteed two years of OS updates should be considered a crime. There is no reason that a smartphone that costs this much should only be eligible for two full OS upgrades. This is how to take the sheen off an otherwise excellent day-to-day experience.

Oppo has talked up the camera capabilities of the Find X3 Pro, and I’m happy to report that this is one of the best options out there — especially the wide-angle. I’ll lament the removal of the 5x telephoto all day, but Oppo claims that more people are using ultra-wide cameras than zooming in. Now I’ll contest that, but if they have the data to back it up, then so be it.

I’ll also say that the ultra-wide is genuinely phenomenal on the Find X3 Pro, so it’s an acceptable trade-off in many respects. The dual 50-megapixel setup is insanely good with excellent detail levels and sharpness throughout the frame. Colors can be dialed up a tiny bit for a slightly saturated look, but the results are normally very pleasing on the eye.

The setup is complemented by a very gimmicky “microlens” camera that can provide 60x microscope-type shots at up to 3 megapixels. Honestly, it’s the only camera gimmick that I’ve actively wanted to try every time I pick up something interesting. The only downside is that it’s hard to get a good up-close image unless lighting is good and you have a steady hand. There is a small ring light to help improve images when using this mode though.

Will you use it daily? Probably not. Is it neat to be able to just plonk your phone down onto a banknote and see all the paper fibers? You bet! It sure beats a generic macro lens, and it’s still nice to see something completely “out there” on a Find series smartphone.

With a power-hungry 120Hz QHD+ display, the battery does suffer somewhat on this flagship smartphone, even when tuning down to FHD+ levels. For a device with a 4,500mAh battery tucked neatly inside, I had slightly higher hopes. The battery longevity is by no means terrible, it’s just a little lackluster compared to similarly positioned products.

I’m not even going to suggest tuning down the display to 60Hz, as in reality, you shouldn’t really have to do that to get the most out of your smartphone lifespan. There is an ace up the sleeve of the Oppo Find X3 Pro, and that would be the literally insane fast charging speeds.

With the 65W SuperVOOC charge brick, wired charging has you filling the battery in well under an hour. Wireless charging speeds cap out at a similarly fast 30W, which can also take you from 0 to 100% in under an hour and a half. No matter which method you choose, you’re not hanging around to get topped up.

A notable here though is that the OnePlus 65W charger and Wireless Warp Charger are recognized as SuperVOOC and AirVOOC respectively. Try as they might, clearly the R&D efforts are just as closely aligned as we’ve hinted at for years.

I love using the Oppo Find X3 Pro, but there are few areas that seriously let things down — even more so than last years Find X2 Pro. It looks great but is a fingerprint magnet, the cameras are among the best we’ve tested, and although the microscope tricks are cool, it’s at the loss of what was a fantastic 5x optical zoom lens.

Everything about this package screams “high-end,” but the lack of long-term software support is borderline insulting when Oppo is asking for around $1,500 for the Find X3 Pro. It takes the literal sheen off what could have been a contender for the Galaxy S21 Ultra’s crown as the best Android smartphone of 2021 so far.

Add in the regional limitations and the Find X3 Pro is relegated to just another great alternative but one that we can’t actively recommend over the flagship Samsung. That’s a real shame, because it delivers in a number of areas and even exceeds in a few. Even without a full seal of approval, it’s one of the best Android smartphones you can buy right now. If you’re happy to overlook a few problem areas, you won’t be disappointed.