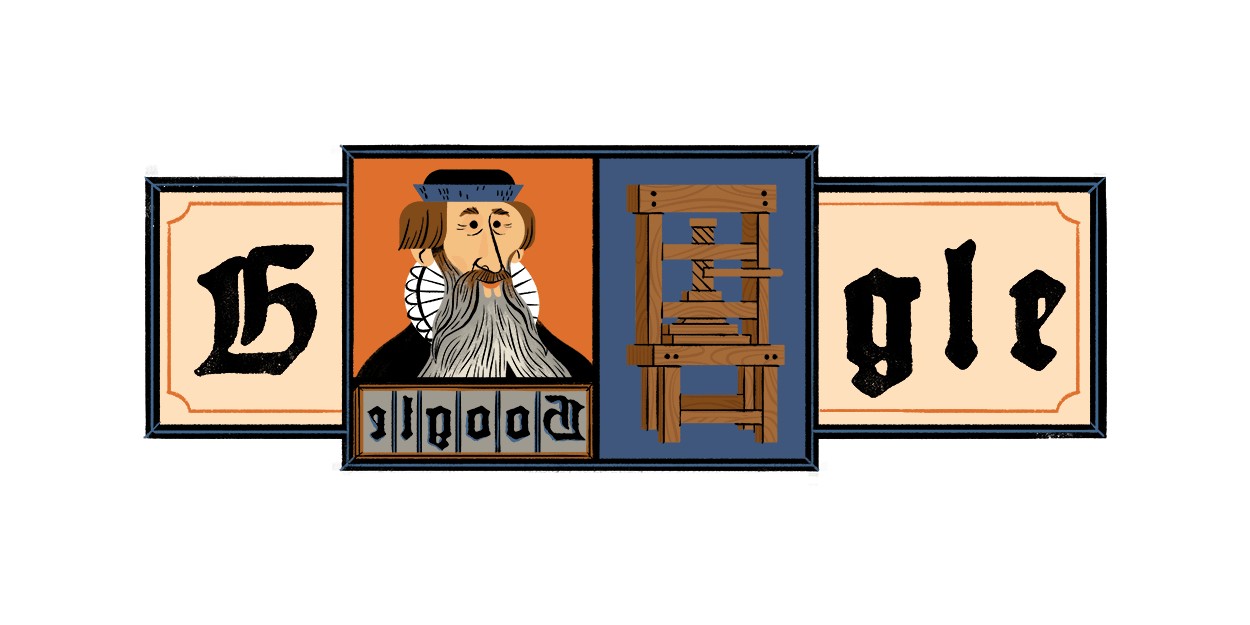 Google has replaced their homepage logo with a Doodle honoring Johannes Gutenberg, the inventor of the movable type printing press, which led to “The Printing Revolution.”

Johannes Gensfleisch zur Laden zum Gutenberg was born in Mainz, Germany, and while his proper birthdate is unknown, he was given an “official and symbolic date of birth” of June 24, 1400, by the city of Mainz. With his early life, Johannes gained expertise in metalworking, particularly goldsmithing and the minting of coins.

Starting in 1436, using his knowledge of coin minting, Gutenberg is said to have modified a winepress to deliver ink to paper, while his metalworking skills were suited to the task of creating each individual letter for the press. In 1440, one year after a failed business venture — one that involved polished mirrors believed to capture the light of religious relics — Johannes Gutenberg is said to have perfected his research into the idea of a printing press, an invention that wouldn’t be in proper operation until 1450, 10 years later.

The printing press was then supplemented by a team of workers who would prepare and press each necessary page, ramping production up to 3,600 pages per day, far faster than the task of a scribe manually copying a text. From there, the benefits of Johannes Gutenberg’s printing press caught on like wildfire, with over 100 printers in operation across Europe by 1480.

Unfortunately, though his idea flourished, Johannes Gutenberg himself was effectively bankrupted around 1456 due to a court dispute between Gutenberg and a lender, Johann Fust. It wasn’t until later in life that Gutenberg was formally recognized for his creation, with Archbishop Adolph von Nassau granting him the title of “Hofmann” in 1465, along with the wealth associated with that title. Three years later, in 1468, Johannes Gutenberg died and was buried in Mainz.

As for why Google chose this day to celebrate Johannes Gutenberg, on April 14, 2000, the Gutenberg Museum in Mainz launched an exhibition in honor of the inventor and in celebration of the museum’s 100th anniversary.