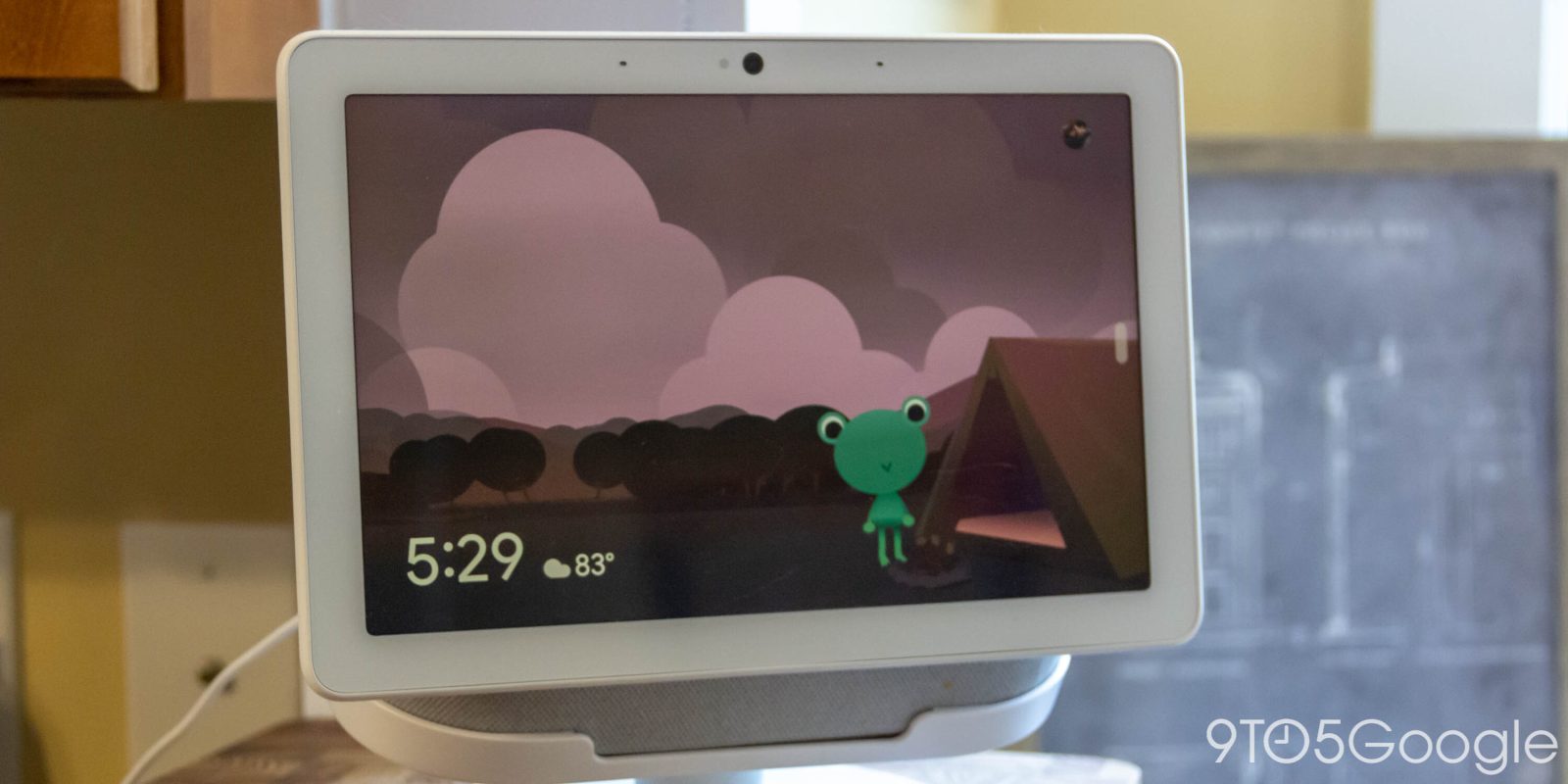 Assistant Smart Displays can either display a clock or photos when they are not actively used. Google is now offering a new background “Photo Frame” that brings the Weather Frog from mobile Search to Nest Hubs.

Update 5/27: The Google Weather Frog is now widely available on the first-generation Nest Hub and Nest Hub Max. You do not have to be enrolled in the Preview program. Oddly, the Sleep Sensing-capable Smart Display doesn’t offer this interactive background that lets you “experience the weather with a lovable flog.”

You can ask for “Hey Google, change photo frame” or visit the Home companion app (device settings > Photo Frame > Experimental). The company is also advertising it on the homescreen as a new card. It’s rolling out as Google this week also modernized the Weather app on Android.

Update 2/23: This interactive clock background appears to only be widely rolled out for Lenovo Smart Displays. The Weather Frog is not yet available on the Nest Hub or Hub Max, even with Cast firmware 1.52. It’s rather odd for Google’s first-party displays to not get an Assistant feature first.

Original 1/30: This “Google Weather Frog” has been in testing on the Nest Hub since at least September. More end users have encountered it over the past few weeks, but it’s not yet an officially rolled out capability.

Once available, heading to the on-device background settings — “Hey Google, change photo frame” — will reveal a new option at the top of the list. It interestingly appears above the standard options for Google Photos, Art gallery, and Fullscreen clock.

A lovable frog to bring you an animated weather experience

Like when you have a rotating carousel of pictures, the time appears in the bottom-left corner. Next to it is the current (“Now”) weather condition and temperature, while you can also see the next two days of forecasts.

The actual background updates throughout the day based on the live condition. They all involve Google’s frog — officially named Froggy — going about their day as the weather changes and you check in on your Nest Hub. It’s not too different from what you get when searching for weather on Android, though those backgrounds are just static. Examples include:

Again, the Google Weather Frog on the Nest Hub and other Smart Displays is not widely launched, but sightings are increasing in frequency. This is being A/B tested through a server-side update. Version 1.52 of the Cast firmware on the Nest Hub and Nest Hub Max introduces a redesigned alarm experience with Sunrise, new Cast tone, Family tab, and expands the dark theme to various system screens, like when there’s no internet connection. However, it does not guarantee this Weather Frog Photo Frame.