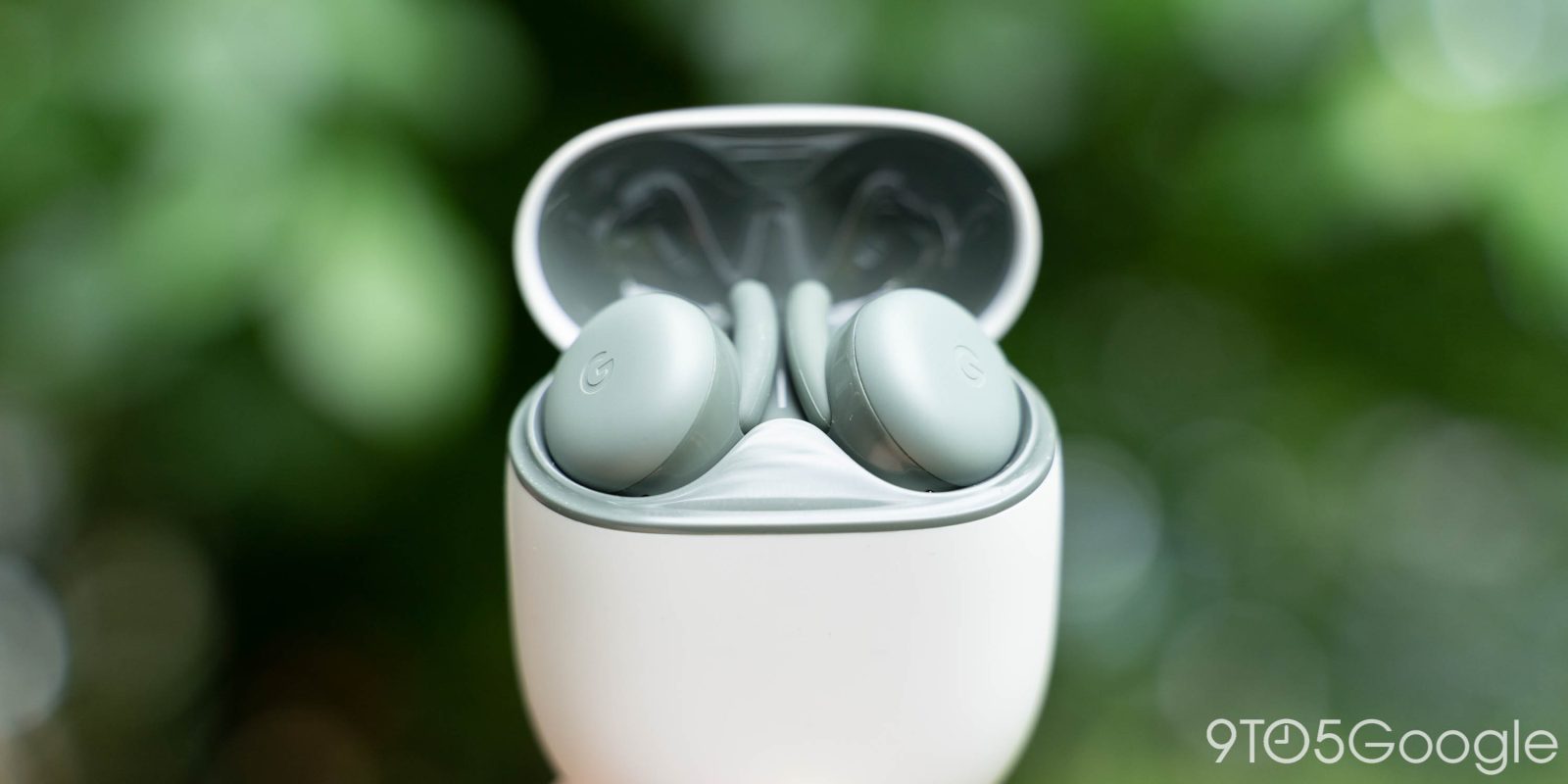 After a flawed first attempt at wireless earbuds in 2017, the second-generation Pixel Buds were, on paper, an absolute win for Google. However, over time, audio cutouts and complaints about battery life soured some users on the $180 earbuds. Now, the Pixel Buds A-Series are making their debut with virtually the same design, but a price that’s nearly cut in half.

After using them for the past week, I can definitively say they’re the better product.

Pixel Buds A-Series cost half as much as Google’s previous release, so where are all of the cuts? Most of the changes come down to hardware in one way or another. We’ll dive into these changes throughout the review, but first, let’s touch on the physical, visually apparent changes.

The earbuds themselves are designed the same as the original Buds, but glossy plastic is used instead of matte. The same change is applied to the interior of the case. It’s hard to say if this was solely a cost-cutting measure, but it works out well if so. Not only is this essentially a meaningless change that doesn’t negatively affect the experience, it almost works for the better since it’s easier to clean the inevitable earwax buildup off a glossy surface versus a matte one. Limiting the color choices to just two options — white and green — also surely helped drive down costs.

Another subtle change is to the case. The general shape and size is thankfully still identical, but the texture is very noticeably different. Instead of feeling like a smooth pebble, the A-Series case has a definite plasticky feeling with a matte texture that has a tacky grip to it. It’s not necessarily a bad change, but it’s one we noticed on our review units almost immediately. The case is also not as evenly weighted, but again, that’s very minor.

Visible differences, though, are only a small part of the equation of how Google cut the price.

Perhaps the single most impactful cut Google made was to touch gestures. They’re not gone, but they’ve been stripped down to the foundation.

Touch gestures on Pixel Buds A-Series are limited only to taps. One tap pauses/resumes audio playback, a double-tap on either side skips a song, a triple-tap goes back, and a long-press triggers your Google Assistant notifications readout. A press-and-hold triggers instant Google Assistant listening as well.

Pixel Buds A-Series have no physical gestures for adjusting volume. Rather, Google points to the always-available “Hey Google” hotword for adjusting the volume hands-free and the use of Adaptive Sound for automatically adjusting the volume based on surrounding noises. Google tells us that removing the number of sensors in the gesture area was indeed a method of cutting costs.

Comfort is the same, for better or worse

One of the things I really liked about the original Pixel Buds was how comfortable they were. They sat in my ears securely, and I could wear them for hours without issue. Some users, though, found that the little “wings” made the Buds uncomfortable fairly quickly.

With the new A-Series, the story is basically identical. If the originals were comfortable for you,  these will be too. If they weren’t, these will feel the same.

If you have never tried a pair of Google earbuds, I think the odds are in your favor that A-Series will be at least mostly comfortable. I can easily wear them for 2+ hours without much of a problem, though I did notice that if I was working outside and sweating, the tips could feel a bit “itchy” within my ear canal, something I haven’t experienced with the regular Buds or others I’ve tested in recent memory. As always, though, fit and comfort of earbuds is very subjective and your results may vary. That’s what return windows are for.

Give it some time

Google tells us that the same “premium” audio quality from the $180 Pixel Buds is what you’ll get from A-Series, complete with similar 12 mm drivers for the speakers. In practice, I found that audio quality was similar, but definitely not the “same.”

Pixel Buds A-Series have a flat sound profile by design, but I found that they lacked in the mids more than I liked. Even with the “Bass Boost” feature turned on in the companion app on my Pixel 5, they still felt lacking here just a bit with some songs feeling a little “hollow” as a result. This was especially notable compared to something heavy on mids, like the Jabra Elite 85t. Even put up against something with a similar sound profile, like Samsung’s Galaxy Buds Pro, Pixel Buds A-Series still felt just a bit flat. They’re very much in the same ballpark as Apple’s standard AirPods.

Notably, though, the results just seem to be getting better, the more I use the Buds. At first, I was put off by the sound quality, but after several hours of use, it’s actively gotten better. It’s possible the drivers just need more time to “break in” versus an average pair. So far, I’d estimate my active listening time on the earbuds is somewhere around 18 hours and, at this point, they sound considerably better than they did at first with noticeable improvements in the mids.

In any case, I don’t think many people would be all that disappointed with the sound quality here given enough time to let them adjust. The selling point of Pixel Buds, after all, is smarts over sound.

Just a touch of the surrounding world

Google designed Pixel Buds and, in turn, A-Series with a physical vent through the speaker which lets in sound from the world around you. This effectively means noise cancellation doesn’t exist and you can absolutely tell. Whether it’s the sound of typing at a keyboard or just the sounds of a city around you,  A-Series will let in external noises.

Personally, I’m alright with that. If anything, it makes these more useful to me. With the vent, I feel comfortable wearing these when I go out to places I still need to be aware of my surroundings. In stores, for example, I can keep listening to my music while still knowing if someone is trying to get past me or get my attention. I do wish, though, that Google would actively take advantage of this by using the microphones to lower the volume when you start talking. That’s a trick Samsung implements, but the vents in Pixel Buds mean Google could do it better without the slightly uncanny-valley feeling that the microphone audio can end up invoking.

Support for the always-listening “Hey Google” hotword is something that’s exclusive to Google’s Pixel Buds despite the instant-Assistant integration being offered on some other earbuds/headphones. On A-Series, this feature takes on a new level of importance.

Instead of being another premium feature that builds up a high-end, expensive product, this feature is what makes A-Series worth it in a sea of affordable truly wireless earbuds. In the $99 price range, nothing else competes with that specific aspect, and thankfully, the feature works flawlessly in my testing. It’s instant and accurate.

Adaptive Sound is the killer feature

When the original Pixel Buds made their debut, they came with the promise of the very neat “Adaptive Sound” idea. The problem, though, was that it didn’t work that well at launch, a problem compounded by the release timing that came in the midst of COVID-19 lockdowns.

On A-Series, I’ve found so much appreciation for this feature, and I’ve been genuinely impressed by how well it works. Volume adjusts so subtly and quickly that it often goes unnoticed unless it’s on your mind. One of my favorite tests for features like this is to work on mowing the yard and Adaptive Sound quite literally rose to the challenge, raising volume to an appropriate level where I could barely hear the hum of my electric mower without getting so loud that it hurt my ears.

That’s not to say it’s perfect, though. The seemingly increased sensitivity led to a couple of minor mistakes. On one occasion, I also noticed the Buds adjusting volume in line with a single passing car. Technically, that’s working as designed, but because it was such as quick sound, it felt a little dangerous for the Buds to raise to drown it out. The other occasion that proved a minor issue was at one point where I was speaking, the Buds raising the volume in the process. As mentioned, I wish they did the opposite of that.

Minus the bells and whistles

A noticeable feature that’s been stripped entirely is Attention Alerts. That optional feature used the onboard microphones to detect sounds such as emergency sirens, dogs barking, and babies crying, and could notify the user when they were heard.

Going forward, too, Google may be limited on bringing new features to A-Series versus the normal Buds. Unlike the $180 product, this more affordable model lacks an accelerometer and gyroscope which, in theory, could be used for future features.

The funny thing, though, is that Pixel Buds A-Series are launching with essentially the same number of features as Google’s 2020 release. The only things missing are features that were added after launch.

Exactly as good as the originals

Battery life of the buds on their own was in line with the original Buds. Five hours is a good benchmark of what to expect on average. I never fully drained the Buds, but my longest sessions were on track to hit five hours with ease, perhaps even going slightly beyond it.

The big improvement on A-Series, though, was Google’s tweak to battery monitoring. The original Buds were notorious for discharging the individual earbuds at starkly different rates which, on occasion, would lead to one bud running out of juice before the other. A-Series has been fairly stable for me here with each bud reporting totals within 5% of the other. Not bad.

Over the course of about five days, each with one- to three-hour listening sessions, I was able to drain the case down to about 55%. That’s well in line with Google’s estimate of 24 hours of listening time from one charge of the case.

The downside? Wireless charging is gone on Pixel Buds A-Series. That’s a sensible removal to cut costs, really, but it’s a shame nonetheless. USB-C works just fine and really is faster in the end, but Qi just makes things easier and makes sense on a premium product. Despite Google cutting nearly $100 off the price, Pixel Buds A-Series is still very much a premium product when there are hundreds of super-cheap but very good truly wireless earbuds out there.

Half the cost, but still the better product

At $99, Pixel Buds A-Series are not the most affordable truly wireless earbuds out there. They’re also not the most expensive. What they manage to be is a definitive middle ground. You might lose some expected features at this price point, like wireless charging, but you’re also getting features that low-end earbuds can’t compete with such as “Hey Google” and Adaptive Sound.

There are just no deal breakers with Pixel Buds A-Series. They nail the experience pretty much across the board for a reasonable price tag without giving up anything important from the regular Pixel Buds. As mentioned earlier, these are the better product, hands-down.

Unless wireless charging is worth an additional $90 — it absolutely is not — there’s essentially no reason to buy the regular Pixel Buds over the A-Series, and it’ll take the arrival of refreshed hardware to change that.