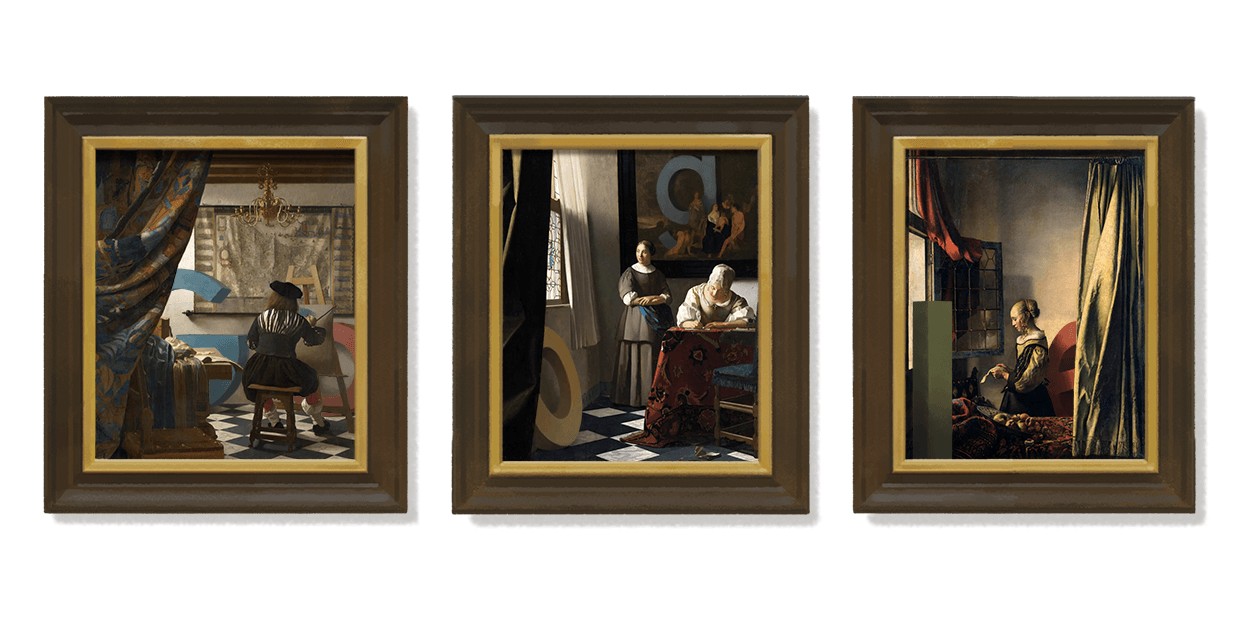 It’s not known precisely when and where Johannes Vermeer was born, but he was baptized in October of 1632 and raised in the city of Delft in the Netherlands. Vermeer grew up surrounded by the arts, as his father, Reijnier Janszoon, owned a business that sold paintings. When his father died in 1652, Johannes Vermeer took over that business.

The next year, in April of 1653, Vermeer was wed to Catharina Bolenes, whose mother was quite wealthy. At some point in their lives, Vermeer and his wife moved in with his mother-in-law. This would be Vermeer’s home and studio for the rest of his days and also the backdrop for most of his paintings.

Not much is concretely known about how Johannes Vermeer began his art career or even who he studied under. By 1653, though, he was respected enough within the local art community to be permitted to join an association of painters, the Guild of Saint Luke.

With the wealth of talented painters in the Netherlands at that time, Vermeer faced tough competition, especially as the artist only produced about three works per year. As with many things in Johannes Vermeer’s life, it’s not clear why he made so few works, but the busyness of managing art trades while raising over 10 children with Bolenes undoubtedly contributed.

Beginning in 1672, tragedy struck the region repeatedly, between economic downturns and multiple wars in Europe. These, of course, led to a massive downturn in art sales, both of Johannes Vermeer’s own works but also the many paintings his business was in possession of. Tragically, it is believed that this overwhelming financial stress ultimately caused Vermeer’s death in 1675.

As the majority of Vermeer’s works were purchased by a single patron, there was little opportunity for his excellent works to be esteemed outside of Delft. For nearly 200 years, Vermeer’s paintings went predominantly unrecognized, in some cases even wrongly attributed to more well-known Dutch painters of the same era.

After some initial rediscovery by others a few years prior, journalist and art critic Théophile Thoré-Bürger published a comprehensive list of works that were either definitively or potentially created by Johannes Vermeer. This ultimately caused a massive rediscovery of Vermeer’s works around the world, which influenced a new generation of artists including Salvador Dalí.

As for why Google decided to honor Johannes Vermeer today, on November 12, 1995, a special exhibition of Vermeer’s artwork was held at the National Gallery of Art in Washington D.C., where 21 of the artist’s 35 known paintings were on display.

To honor Johannes Vermeer, Google has cleverly altered three of the artist’s iconic works to include the letters of “Google.” The first, The Allegory of Painting, features the blue “G” and red “o,” with the subtle detail of the depicted artist — believed to be Vermeer himself — beginning to paint the letter “G” onto a canvas.

In the center, Woman Writing a Letter, with her Maid has been altered to include a yellow “o” in front of the stained glass window, while a blue “g” features in the painting in the background. In the third painting, Girl Reading a Letter at an Open Window, Google has placed a large lowercase “l” in the foreground, while the letter “e” is mostly obscured behind a curtain.

If you’re interested in seeing these paintings without the letters of “Google,” you can see them — and more — through Google Arts & Culture.