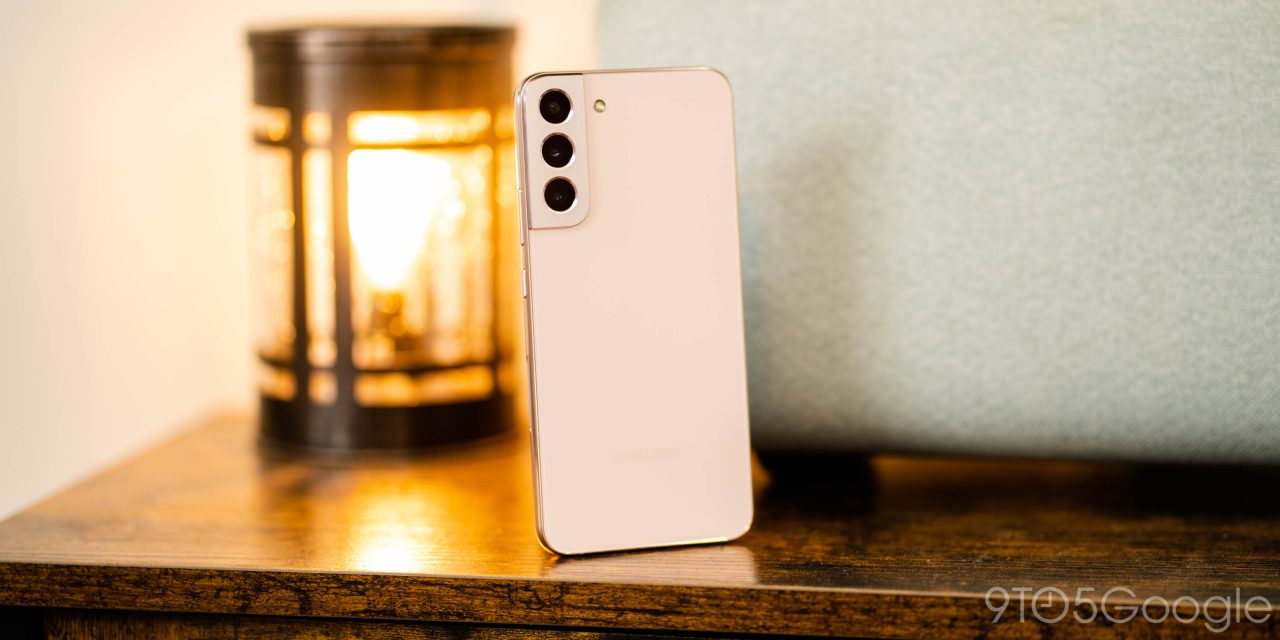 Samsung’s Galaxy S flagship has long acted as the go-to device for Android users thanks to a consistent experience, top-tier hardware, and more. This year, Samsung is keeping up the same streak, with the Galaxy S22+ shining as a solid smartphone across the board thanks to refinements over the past few years, all while introducing one of the biggest upgrades we’ve seen in Samsung’s main smartphone in almost three years.

A unique and wonderful feeling

The Galaxy S22+ is, visually, a similar look to its predecessor. It has the same cornered camera bump and shiny metal frame, but there are some minor changes. Samsung has separated the camera module from the rest of the frame, though you won’t see that at a straight angle. The back glass is also no longer curved, which results in an almost sharp, but surprisingly comfortable feeling for the frosted glass.

The metal frame is also a bit flatter, but it still has a bit of curve to it. The “Pink Gold” color I have here is gorgeous in person but hard to accurately represent on camera. I couldn’t help but wish I’d had a chance to check out the green, violet, or “Sky Blue” colors, though. Samsung.com has the best selection of colors, and if I were buying this phone I would absolutely jump on the “Sky Blue” option.

A lot of these design aspects are not-so-ironically similar to Apple’s latest iPhones, but it completely works in the context of Samsung’s design. Visually, the phone still stands out, but it feels even better in the hand in my opinion compared with what came before.

The hardware itself has a comfortable heft to it as well, at least in this “Plus” model. The new smaller size is also just about perfect, with the phone being noticeably shorter than the Galaxy S22 Ultra and Pixel 6 Pro, but roughly the same width.

Flat displays are better, and Samsung’s are the best

Perhaps the best aspect of this design in the context of the Galaxy S22 lineup, though, is that the display is flat. That’s unlike the Galaxy S22 Ultra, which has noticeable curves on either side of the display. The flat glass lessens reflections and felt more comfortable to use overall, though I did notice that, especially when it was in a case, the display would hold on to dust and small hairs tightly.

The panel underneath that flat glass is also top-tier. Despite being only a 1080p panel, content remained sharp with the vivid colors and deep blacks that are expected on a flagship Samsung phone. The 120Hz refresh rate never stuttered, and the touch response was pretty much perfect for everything from general scrolling to my limited gaming sessions. The ultrasonic fingerprint sensor Samsung uses also remains one of the best in the game, with consistent and quick unlocking.

In terms of size, the move to a 6.6-inch display is welcome. While it’s only marginally smaller compared to the 6.7-inch Galaxy S21+, it’s a difference you can definitely appreciate while holding the phone, as it feels like less of a burden. Unless you truly need a tiny phone, I think Samsung is settling on a near-perfect smartphone size on the Galaxy S22+. It’s also really nice that the display has virtually identical bezels around each side, but it’s also a minor design choice that I’ve never understood the obsession with. Whatever the case, it looks nice!

The best Android update policy with stable and speedy software

We dove into Samsung’s software experience more in our Galaxy S22 Ultra review, but in short, the conclusion is the same on the Galaxy S22+. Samsung’s One UI 4.1 is full of useful features and welcome upgrades, such as Android 12’s Material You theming that I especially enjoyed with the vibrant pink wallpapers that were used on my review unit.

Performance was indistinguishable from the Galaxy S22 Ultra, despite the Galaxy S22+  having 4GB less RAM available to the system. Even with 8GB, though, this phone speeds along and has no trouble keeping most apps open in the background for a little while, though Samsung’s skin is still just a bit harsher on some background processes than I’d like.

It also can’t be mentioned enough that Samsung’s software is the best in the Android industry, not necessarily by its design or feature set, but because of its longevity. Samsung commits to supporting the Galaxy S22+, and its other recent releases, for four years after launch for major Android updates, and five years for security patches. Outside of an iPhone, you won’t find better official long-term support. It certainly makes the S22+’s $999 price tag much easier to swallow, too.

Samsung has also taken a big step when it comes to messaging, by integrating Google Messages as its default SMS app and thereby making RCS easier to use on this device. However, as has been noted by Google since the S22’s launch, some US carriers will take over the RCS backend on the Galaxy S22, S22+, and S22 Ultra specifically.

Reasonable endurance, not so reasonable charging

Battery capacity on the Galaxy S22+ is a downgrade from the year prior, with the phone dropping from a 4,800 mAh cell to a 4,500 mAh pack. Coupled with the smaller display, it’s not a difference that had a major impact on my usage.

Generally speaking, the Galaxy S22+ was a phone I couldn’t kill in a day without actively trying to do so. From 8 a.m. to 11 p.m./ 12 a.m. daily, I never had the Galaxy S22+ die in a full day of use, and it only dipped below 20% twice in my nearly two weeks of usage. The major caveat to that, of course, is that I work from home, and my phone is generally connected to Wi-Fi all day. Weekends, however, were equally unaffected. Between trips to the store and increased usage during the day, I never noticed a major impact on battery life due to moving to cellular connections over Wi-Fi. Games are a drain on the battery, of course, but this is all to say that battery life on the Galaxy S22+ is pretty much what you would expect and want. For most people, this phone will not die in a single day of use, but particularly heavy users will likely be reaching for a charging cable in the late evening from time to time.

Charging on the Galaxy S22+ is quick, too. Samsung rates the phone for 45W charging speeds, though some tests have shown that the phone doesn’t actually benefit from that input compared to 25W. In any case, charging speed in my testing was considerably faster than the Pixel 6 Pro I usually use, and it was easy to get a top off the one night I forgot to charge the phone.

But a lot of the good with the charging situation is ruined by the fact that Samsung doesn’t include a charging brick in the box, and worse yet charges $50 for one that provides full speed to this phone. A promo code for a free charger after purchase would go a long way in keeping customers happy while still making a good move for the planet in eliminating some unnecessary e-waste.

One of the biggest upgrades on the Galaxy S22+ is its new camera, which is updated in a meaningful way for the first time since the Galaxy S10 series. The new 50MP primary sensor is a newer version of what ships in Google’s Pixel 6, with a large physical sensor that can capture more detail and produce more natural bokeh in images.

In practice, I’ve been more than pleased with this camera. It can capture some truly gorgeous images, especially when it has plenty of light. Detail and bokeh, as mentioned, really stand out compared to the sensors Samsung used on its older Galaxy S devices, even though this new one still lags behind the “Ultra” models. The S22+ also lacks the stunning telephoto lenses of the Ultra, which left zoom shots mediocre. Night shots are fine, but they didn’t particularly stand out to me.

Of course, physical hardware can only take a smartphone camera so far. Software is key, and it’s still an area Samsung struggles a bit. HDR processing works out well, but Samsung still oversaturates some shots – that’s fine in most cases though, as it results in striking images that are ready to be shared immediately. My biggest gripe was with shutter lag. Any movement of the camera itself or the subject would result in sharpness being lost in the final image. This was especially annoying taking pictures of a dog, for example, and would only be more frustrating if trying to take pictures of a child.

Samsung still sits in a definitive third place in the camera race, with the Pixel 6 series and Apple’s iPhone 13, especially the Pro models, being more consistent and reliable in their results.

There’s a good reason for Samsung’s Galaxy S flagship to be the go-to year after year. These phones are historically stable, easy to buy, and just… good! The Galaxy S22+ keeps up that legacy across the board. It’s a better version of what came before it, and I think the sleeper hit of Samsung’s 2022 lineup. The Galaxy S22 Ultra will be all the rage among fans and former Note owners, but for the mass market that just wants a good phone, this is the best flagship-tier device in Samsung’s lineup today.

That said, the only thing that makes it a little harder to recommend is that the Galaxy S21 FE sits in that same class. Sure, its processor is a year old, and its camera isn’t as strong. But really, most folks aren’t going to notice those points very much. I’d be hard-pressed to recommend the S22+ over the S21 FE for a $300 difference, but in either case, you’re getting an absolutely stellar phone – the Galaxy S22+ is just a little more stellar.