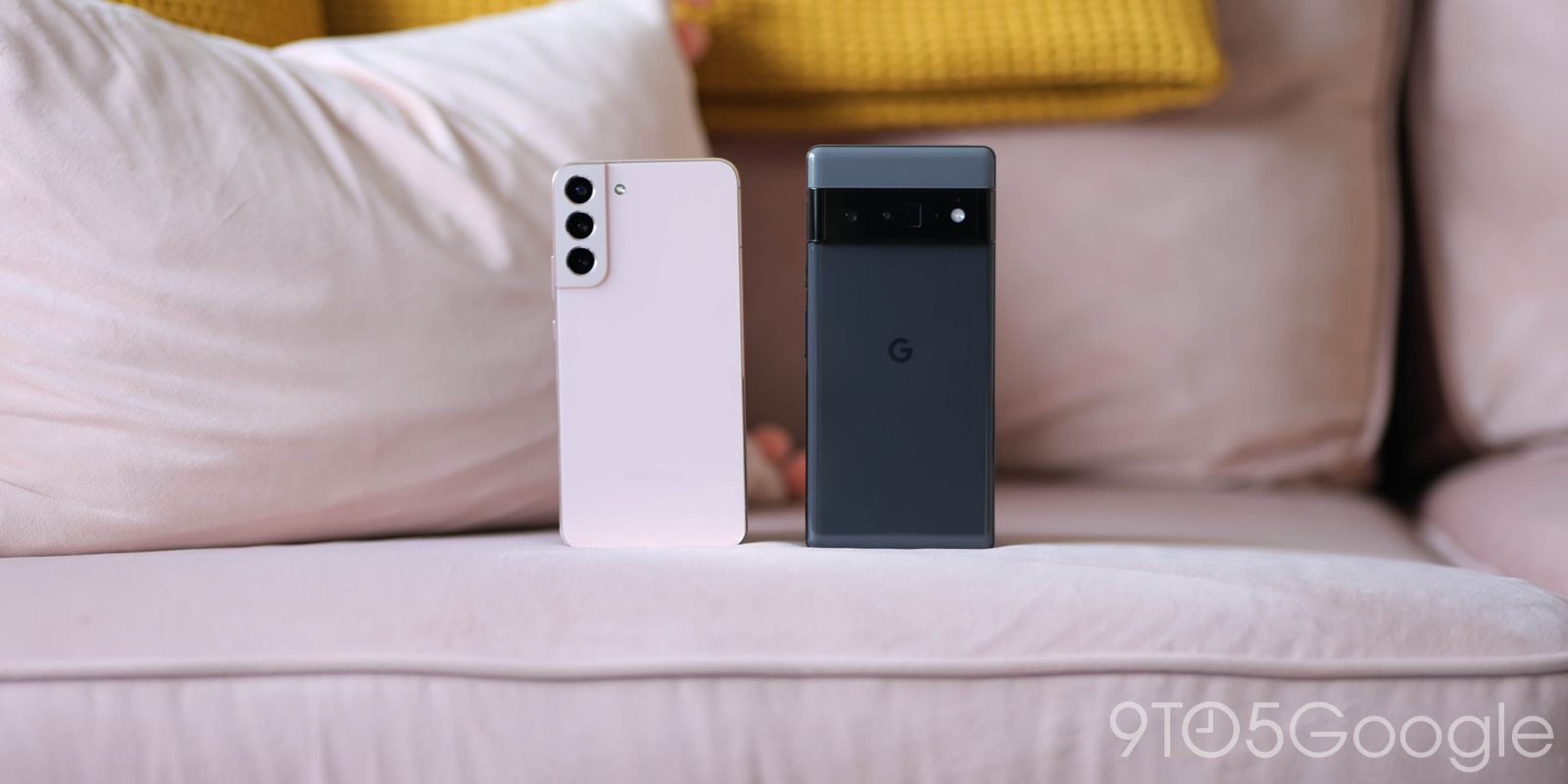 As Samsung’s middle child, the Galaxy S22+ might not be the outright best in the entire lineup, but it’s still a $999 smartphone that competes more directly with the $899 Google Pixel 6 Pro than the S22 Ultra. So, which is the better buy overall?

In some ways, it’s a little unfair to directly compare the Galaxy S22 Ultra to the Pixel 6 Pro, given that it’s a completely different beast to the “regular” Android flagship. The Galaxy S22+ sits more in line in terms of pricing and specifications with Google’s current top tier smartphone.

The tale of the tape is quite stark when directly comparing the Pixel 6 Pro and Galaxy S22+. It’s heavily in favor of Google’s latest and greatest smartphone in most areas courtesy of a higher resolution 120Hz AMOLED display, higher base RAM allocation, and even a bigger battery.

No smartphone is used on paper though, and the Galaxy S22+ includes a better processor. In some global regions, you’ll get the 4nm Qualcomm Snapdragon 8 Gen 1 or the Exynos 2200. Google’s own Tensor processor was co-developed with Samsung but uses the 5nm architecture. There is a performance gulf but one that is actually less noticeable in daily use.

Just looking at the display specifications you’d wager that the Pixel 6 Pro has a better screen. However, if you like flat displays and tiny bezels, the Galaxy S22+ may have a lower resolution AMOLED but it’s far superior for usability. The peak brightness is also almost double that of the Pixel 6 Pro too, which means that the Galaxy S22+ is great for just about any environment possible. The Pixel 6 Pro still has an excellent screen and one that is still higher resolution and super fluid.

Because both smartphones utilize in-display fingerprint scanners, the biometric unlock method is tied directly to the screen. The Galaxy S22+ uses an ultrasonic fingerprint scanner, while the Pixel 6 Pro uses an optical reader. While updates have improved the fingerprint scanner on the Pixel, unlocking the S22+ is lightyears ahead and the experience is seamless.

In terms of hardware design, the Galaxy S22+ and Pixel 6 Pro are at very different ends of the spectrum. Google’s quality control has been under fire for a few years but the Pixel 6 Pro is undoubtedly a premium product that feels very “Samsung” in its execution. The Galaxy S22+ simply iterates on the S21 series but with more touches to make it a better overall package. It even has a wider array of colors to choose from should you want more finishes to decide between.

Samsung has recently tweaked update promises for flagship lineups and this means that while the Pixel 6 Pro and Galaxy S22+ both shipped with Android 12, you can actually expect the latter handset to get a longer official support window.

The Pixel 6 Pro is currently eligible for the Android 12L update, which includes tweaks to take better advantage of larger displays. All Galaxy S22 series handsets shipped with One UI 4.1, which is based upon Android 12. One UI is a very different experience from the lightweight Pixel version of Android 12 and 12L, in that it offers more features that Pixel phones have traditionally lacked. It’s also important to note that the Pixel 6 series has also suffered from some update issues and bugs that you simply will not find on the Galaxy S22+.

It also lacks some of the more prominent changes added with the Material You overhaul or offers watered-down alternatives. A prime example is the Color Palette feature which works in a similar way to the wallpaper-based Dynamic Color theming found on all Pixels running Android 12 officially. Elsewhere though you get a wealth of extra options that have just started to come to AOSP builds. Samsung certainly stuffs One UI with added options that are often way ahead of the curve.

Google has marketed the Pixel 6 Pro with certain features like Magic Eraser already exists in the Samsung Gallery app as “Object eraser.” that’s just the tip of the iceberg as Samsung stuffs One UI 4.1 full of extra functions and features that you likely won’t find anywhere else. In other areas, such as the core UI, Samsung has excelled in reachability all without changing too drastically from Android 10 through to Android 12. This is certainly something that Google could learn from with future Android releases.

The kicker here is that Samsung has decided to oust Google as the update champion on Android with an extended upgrade schedule. While both devices ship with Android 12, the Samsung Galaxy S22+ will be eligible for updates up to and including Android 16 and One UI 8. Conversely, the Pixel 6 Pro will be updated to Android 15 and then receive a further two years of security patches. If you value longevity, it’s a no brainer which device to pick.

On paper, you would expect the 10% larger internal cell of the Pixel 6 Pro to outlast the Galaxy S22+ but in practice, it’s not quite as pronounced. The lifespan on both devices is fairly similar owing to the higher resolution Pixel 6 Pro screen. Neither phone has terrible longevity but nor are they the longest lasting on Android.

The camera setups on the Pixel 6 Pro and the Galaxy S22+ are incredibly similar with just a few notable changes that tip the scales slightly in favor of Google’s latest flagship. While Samsung often relies on camera brawn, Google has traditionally relied on software processing to achieve great things with modest camera hardware.

In 2021, the rulebook was rewritten and the resulting Pixel 6 Pro camera system now competes far more directly with the best in the business. However, the main ISOCELL GN1 sensor is older than the GN5 used in the Galaxy S22+ which offers a marginally faster aperture. Images are great from both main sensors but there Google’s software processing excels across the board but you can’t access the full 50-megapixel sensor on the Pixel 6 Pro whereas the Galaxy S22+ “Pro Mode” lets you get full granular with added controls and functions.

The ultrawide cameras are also comparable but the Galaxy S22+ has an increased field of view over the Pixel 6 Pro and the lens also has a faster aperture for better overall wide-angle shots in a variety of scenarios. Samsung has improved the telephoto zoom lens on the S22 series, as previously the S21 used a 64-megapixel sensor and cropping to achieve a 3x digital zoom.

The 10-megapixel provides S5K3K1 provides 3x hybrid optical zoom this time around for better telephoto images. This pales in comparison to the 48-megapixel 4x periscope zoom found on the Pixel 6 Pro. With either handset, zoom shots are more than usable up to the 10x mark.

While video modes are plentiful on both devices, the S22+ ups the ante with video recording at up to 8K resolution at 24fps alongside a plethora of Pro mode controls and even the impressive Portrait video. On Android, Samsung reigns supreme for video recording and that streak continues here.

Pixel 6 Pro vs. Galaxy S22+: Which is the right smartphone for me?

With the Pixel 6 Pro coming in at around $100 less than the Galaxy S22+, you’ll have to decide between power and prowess or software finesse and arguably better photography capabilities. At least in terms of longevity, the extra $100 gets you a lot of smartphone and the S22+ certainly feels like a better option for most Android fans out there. It might seem like the awkward middle child but in reality, it’s a great package stuck between two more prominent products.

Google has fixed a number of the major bugs that riddled the Pixel 6 Pro upon launch, with more minor tuning expected with each passing update. Choosing between the Galaxy S22+ and Pixel 6 Pro will undoubtedly come down to whether you want a better camera and cleaner software or a more feature-rich smartphone that will be updated for longer. Even with a higher price tag, you get a little bit more bang for your buck with the S22+ than the Pixel 6 Pro.

Where to buy both devices?