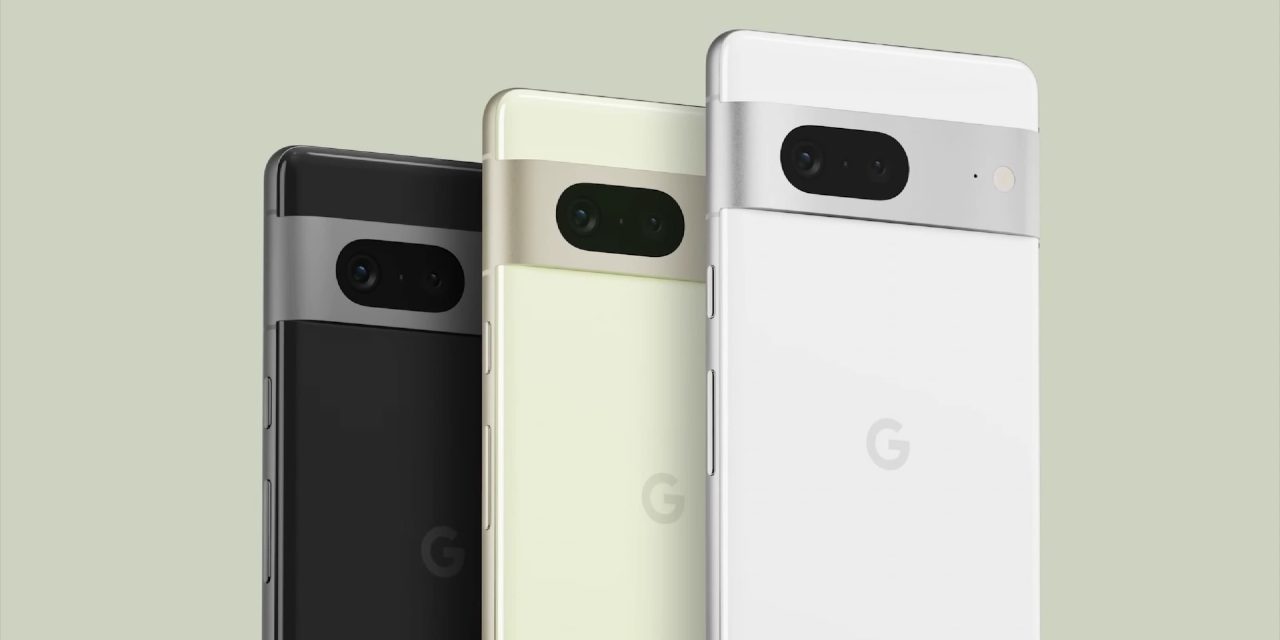 The Google Pixel 7 just went official as Google’s “affordable flagship” for 2022. What’s new? Tensor G2, an updated camera setup, and more, but all for the same price tag.

On paper, the Google Pixel 7 shares a lot with the Pixel 6. It has a 6.3-inch FHD display that has a faster 90Hz refresh rate compared to more affordable phones, or Apple’s iPhone 14 which falls in roughly the same price bracket. There’s still an in-display fingerprint sensor under that display as well with 1,400 nit peak brightness.

You’ll also find the same charging speed at 21W wired charging and 20W wireless charging on the latest Pixel Stand. But, interestingly, the battery capacity has dropped to 4,355 mAh from the 4,600 mAh cell in the previous Pixel 6. Google is also shipping this model with either 128GB or 256GB of storage and 8GB of RAM.

All in all, it’s the same solid package, just with a few upgrades around those core elements.

First and foremost, Google Tensor G2 will power the Pixel 7 and the Pixel 7 Pro. This new chip runs on essentially the same core layout as the original Tensor, but with a more efficient 4nm process. Google isn’t making any bold claims, but that should result in moderate battery savings and slightly better performance too. We’ll be putting that more to the test in our forthcoming reviews.

You’ll also find Wi-Fi 6E+ support on the Pixel 7, just in time for the new Nest Wifi Pro. Google is also adding support for a built-in VPN powered by Google One for the Pixel 7, but it won’t be available at launch.

The other main change you’ll see to the spec sheet is with the cameras. The rear camera setup still consists of a 50MP primary camera and a 12MP ultrawide camera, with no telephoto capabilities to speak of. The camera is also being updated with support for “Cinematic Blur” in videos and support for 10-bit HDR video. Google says zoom is “enhanced” this year, too, but the Pixel 7 still has 2x “optical” zoom by cropping in on its 50MP main camera and can go up to 7x through digital zoom.

The front-facing camera is revamped with a new 10.8MP sensor that’s capable of using face unlock.

Face unlock on the Pixel 7 is powered through software rather than requiring additional sensors as the Pixel 4 series used, and how the iPhone handles “Face ID.” How this works in real life remains to be seen, but it’s a project we’ve reported that Google has been working on for quite some time. Notably, that selfie camera is also now at a wider angle compared to the previous model.

The Google Pixel 7 will ship with Android 13 out of the box and, like the Pixel 6, is set to get three years of major Android updates and five years of security updates.

Looking at the hardware, the Pixel 7 is slightly more compact compared to the prior generation and has slightly smaller bezels. It’s available in three colors – Snow, Obsidian, and Lemongrass – and has a “Satin Metal Frame” to match the phone’s color, rather than being black on all models as we saw on the Pixel 6. It’s also considerably lighter at 197g.

As mentioned, pricing on the Google Pixel 7 lands at $599, unchanged from last year. The device will be available in the same regions as last year, but with the additions of Norway, Denmark, Sweden, Netherlands, India, and Singapore at launch. Pre-orders are open today from the Google Store and major retailers such as Best Buy, with deliveries later this month.