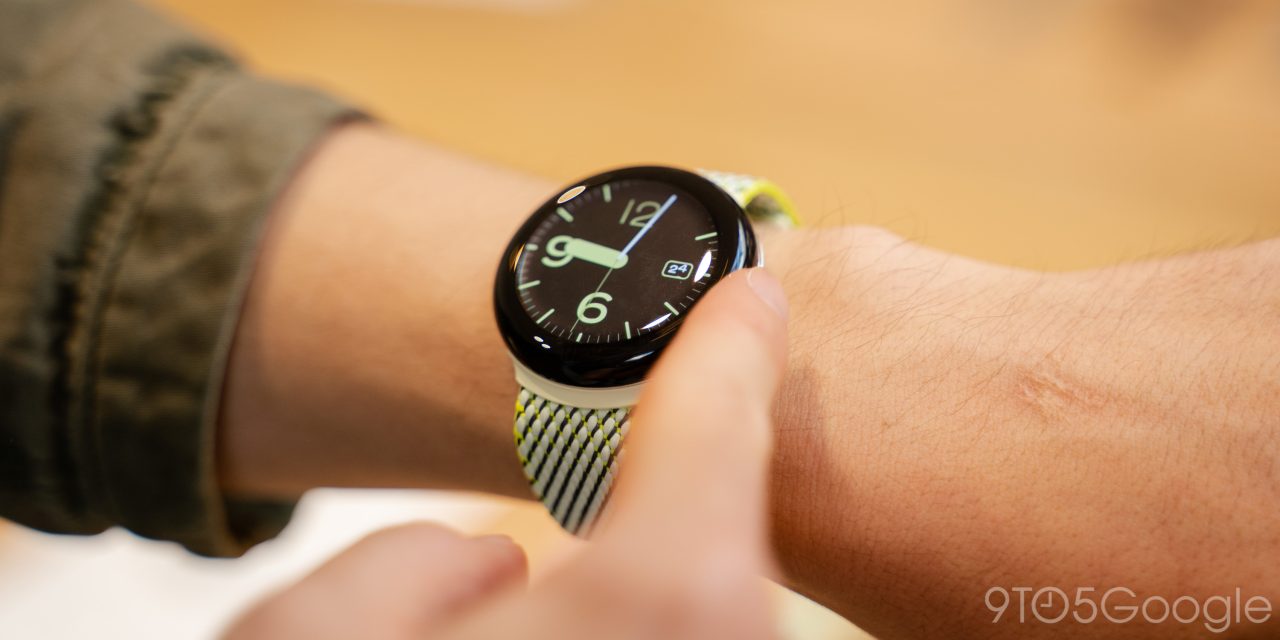 The Pixel Watch is finally, actually, really here. After the better part of a decade waiting for Google to release its first smartwatch, you’ll soon be able to strap it onto your wrist. Following today’s launch event, we’ve had a chance to spend a few minutes with the Pixel Watch, so here’s a quick look at the hardware and, more importantly, our first real look at Wear OS 3 and Google’s software experience.

The Pixel Watch is pretty small. Google’s official measurement is 41mm, and that seems right. The transition from my Galaxy Watch 5 44mm felt quite drastic, but it’s a size I think I’ll get used to. For our Abner Li, it was comparable but certainly larger than the smallest Apple Watch.

Probably a bit more polarizing, though, will be the thickness and bezels. Put frankly, I don’t think either is remotely a problem.

In our time with the Pixel Watch, the display and bezels are hardly noticeable in actual use. The dark theme UI effectively blends the interface into the bezels, making them mostly invisible. Can you still see them? Of course! You’ll always notice bezels if you’re looking for them, but genuinely, I feel like these are not as big of a problem as many have made them out to be.

Let’s see if the time until our full review changes that.

On the other hand, there’s the thickness of the watch, which Google says is 12.3mm. It certainly seems to be on the thicker side in person, but it’s not uncomfortable on the wrist. Again, time will be the real judge here.

How are the bands and Google’s proprietary connector?

One of the other controversial moves Google has made is on the band situation. The Pixel Watch uses proprietary bands, and they’re not cheap. The stock “Active” band is $49 on its own, though it is a very soft and comfortable option.

The “Woven” and “Stretch” bands are more comfortable and probably better suited to sleeping. Google also made two types of leather bands that are very good looking with their added lugs and quality straps. The metal link band is the one that caught my eye the most at the hands-on, with a hefty weight and premium feel. It surely won’t be cheap, but it looks compelling nonetheless.

How about the band connector? It seems good! Google’s comparison to a camera lens mount is very appropriate, and bands sit in place snugly. The process of connecting and disconnecting the bands isn’t particularly intuitive at first, but it seems like something that users will quickly be able to develop muscle memory for. And, it will indeed be much quicker than the traditional pins.

Will that make up for higher prices and limited choices? We’ll have to wait and see.

One of the biggest things I was curious about going into the Pixel Watch was how Wear OS would be. After all, this is our first chance to see how Google intends the revamp of its platform to look and feel.

In short, it seems like a great middle ground! I’ve always been of of the opinion that Wear OS has a solid foundation that just needed some modernization and good hardware to back it up. At least on the point of the former, the overall look and feel is cleaner and faster, and it fits in with Android 13 and Material You a whole lot better than Wear OS 2 did.

The pre-loaded apps also seem tame, with mainstays like Assistant, YouTube Music, Google Maps, and others, as well as the new Fitbit suite which is actually made up of several different apps rather than a single one, much like Google Fit offered.

Notably, Google Fit wasn’t pre-installed on the units Google let us play around with, but those were in a retail demo mode, so it’s not confirmed that Fit will actually be missing at launch.

The big question, of course, has always been what Google will bring to the table when it comes to performance. Luckily, it seems to stick the landing.

Despite using an older chipset, the Pixel Watch flew without any hiccups in our hands-on time. Swiping through apps, tiles, and watch faces was fast and fluid. In fact, I’d say the Pixel Watch felt a bit more fluid than my Galaxy Watch 5. Time will tell if that holds up.

We’ve only spent about an hour with the Pixel Watch so far, but our first impressions are, for the most part, pretty good! Google’s smartwatch experience seems capable on a hardware level, and the software is solid too. The hardware is also very much aesthetically pleasing. It seems like a great start.

Is the Pixel Watch worth its price? That remains to be seen, but stay tuned for our full review, and fire off any questions you have in the comments below! We’ll try to answer everything we can.

The Pixel Watch is available for pre-order now from the Google Store as well as retailers including Best Buy.