Searching for Stadia: GeForce Now is the king of quality 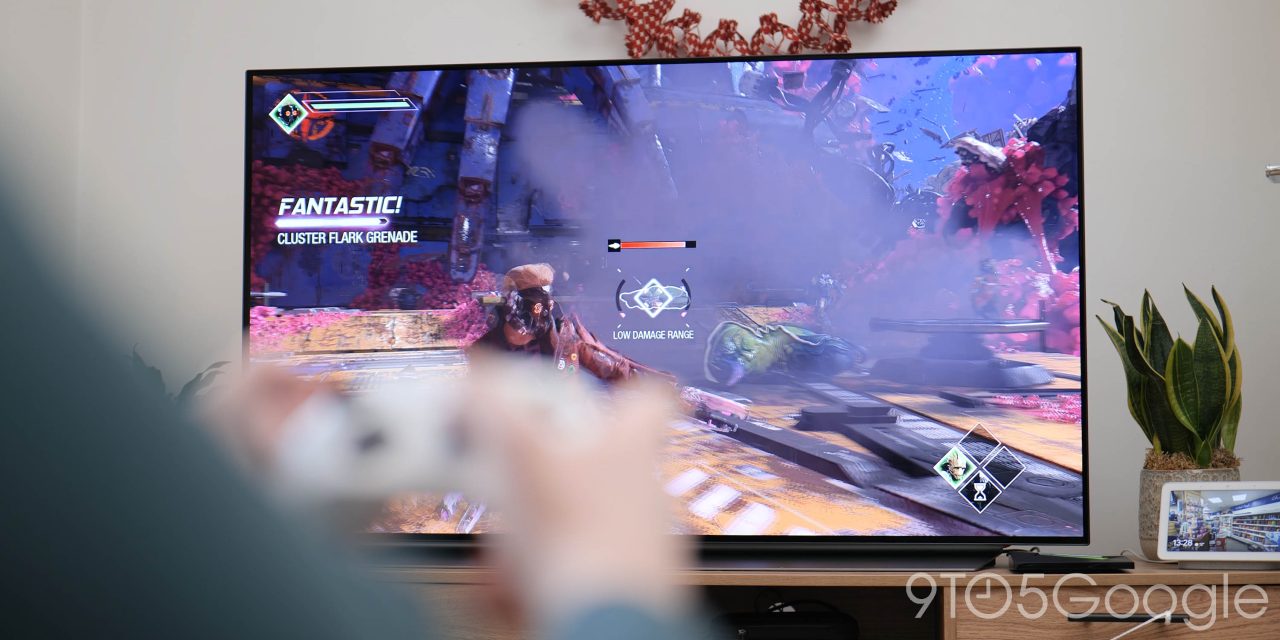 Nvidia GeForce Now is currently the only cloud gaming service to match the level of streaming quality and low latency of Google Stadia, even exceeding it in some areas.

Searching for Stadia is a short series intended to shine a spotlight on what made Google Stadia special in the wake of its upcoming shutdown and compare those traits against the ever-widening market of cloud gaming subscriptions.

Right off the bat, I feel it’s important to emphasize exactly what it is that Nvidia has gotten right with GeForce Now. With a “RTX 3080” tier subscription (provided to us by Nvidia for review purposes), GeForce Now offers the absolute best visual quality of any cloud gaming platform on the market today.

As the name is meant to suggest, GeForce Now’s highest tier is powered by the high-end RTX 3080 graphics card, complete with full support for ray tracing graphics. I’ve spent much of my time with the service finally playing Cyberpunk 2077, and the difference in graphical quality, coming from the Stadia version, at times feels like night and day.

Since you’re playing the full-fat PC versions of these games, the full set of graphics tweaks are available, but Nvidia generally has a recommended quality setting pre-filled for whichever subscription tier you’re on. The RTX 3080 tier is able to run Cyberpunk 2077 at 1080p resolution, 60 frames per second (fps) with nearly maxed-out settings.

Depending on what device you’re running on, you can crank things up even higher. If you’re on Mac or PC, GeForce Now’s highest tier can match Stadia’s 4K streaming, while also offering 120fps streaming across Mac, PC, ChromeOS, and Android. HDR is even available on some platforms, though the list of games that support it is more limited.

In terms of sound, GeForce Now — on PC, Mac, and Android TV only for now — matches Stadia Pro’s 5.1 surround sound and even offers full 7.1 surround on the RTX 3080 tier.

More importantly, Nvidia has also managed to shave down input latency even further with the RTX 3080 tier subscription. I had previously played through Control via the free and Priority tiers of GeForce Now, but playing Cyberpunk 2077 on the highest tier feels quite close to a native experience, give or take any hiccups in my home network.

Out of every cloud gaming service I’ve tried over the years, GeForce Now on the RTX 3080 tier is the only one to feel as consistently smooth to play as Stadia. The latency is low enough to be relatively unnoticeable (outside of competitive gaming situations where every millisecond counts) and the graphic enhancements of a high-end Nvidia GPU cannot be understated.

Quality comes at a cost

By and large, if the things you enjoyed most about Stadia were the quality of the stream itself, low input latency, and the extra features of Stadia Pro (e.g. 4K, HDR, and surround sound), you will likely find GeForce Now to be an excellent new destination for cloud gaming.

That said, the necessary RTX 3080 tier for that top-notch quality comes at quite a cost, running $19.99 per month. That price is on top of the cost of any games you may want to play. By comparison, Stadia Pro offered quality improvements like 4K — though without actually improving any underlying hardware — and free games to play, all for half of that price.

If you’re willing to take a step-down in quality, you can use the $10 “Priority” tier, which offers up to RTX 2080 level quality, but without the higher resolutions, frame rates, and a shorter cap on playtime (six hours versus eight).

However, a key detail of GeForce Now is that you can also use it entirely for free, if you’re willing to deal with a few restrictions. In the free tier, you have full access to the same library of games, at a lower quality, with an enforced playtime limit of one hour. At the end of the hour, you’ll need to wait in the queue again for a GeForce Now box to become available, a process that can take seconds or minutes depending on how busy things are.

In that way, GeForce Now is one of the few services that matches Stadia’s ability to let you play the games you’ve purchased with no subscription fee required. The inconvenience of restarting your game every hour makes a paid subscription seem quite compelling, though.

As mentioned before, GeForce Now is available on a wide variety of platforms, including ChromeOS, PC, Mac, Android, iOS (via web app), Android TV (with special features on Nvidia Shield), smart TVs from Samsung and LG, and nearly anything with a Chrome web browser.

With the sole exception of the Chromecast Ultra, you can play GeForce Now from all of the same places you could access Stadia. This ability to play from anywhere is one of the key benefits of cloud gaming and GeForce Now nails it.

Similarly, jumping from device to device is still possible without losing your gameplay progress. I can start a session on my PC and move to my phone with relative ease. At the top of the app, you’ll see your most recently played games, making it easy to tap one and hop back in.

When launching some games, Cyberpunk 2077 for example, instead of hopping directly into the game, you’ll have to handle the launcher first. If you’re playing with a mouse and keyboard, this is no biggie, but it’s trickier from a controller, as you have to move the cursor with a thumbstick and “click” with buttons.

More than that, though, the occasional need to use (or simulate) a mouse and keyboard is one of the ways that GeForce Now’s rendition of cloud gaming still has some of the rough edges of gaming on Windows.

By contrast, Google Stadia put significant emphasis on making sure, wherever possible, that it didn’t matter whether you played with a touchscreen, controller, or mouse and keyboard. It was also seamless and easy to swap between control schemes at a moment’s notice. Beyond that, clicking to play a Stadia game always launched directly into the game, without ever feeling like you were using a “cloud PC.”

Nvidia has put some effort into making launching a game easier, but there’s still work to be done to match the ease that Stadia brought.

Unlike Google Stadia, which required all players to start their game libraries from scratch, GeForce Now is wholly reliant on the libraries you’ve built up in other platforms. To play something in GeForce Now, you need to own it via Steam, Epic Games Store, or another supported platform.

However, just because you’ve purchased any given game through one of those stores doesn’t mean you can actually play it on GeForce Now. A few years back, Nvidia changed the way its service worked, requiring game developers and publishers to approve their titles to appear in the GeForce Now library.

Despite that, GeForce Now does have a surprisingly full library of games, premium and free-to-play alike. There are some key missing players, with both Activision and Sony choosing not to offer their games in Nvidia’s cloud, keeping franchises like Overwatch, Call of Duty, and Spider-Man off of the platform.

But overall, the library is extensive — over 1400 games and counting, compared to Stadia’s 304 — and it’s easy to find out ahead of time whether a game is supported before you purchase it. Better yet, Nvidia often works with publishers to ensure some of the hottest games are available on GeForce Now on launch day.

The only awkward part is needing to leave the GeForce Now app, open Steam or Epic Games Store in a web browser to buy the game there, resync your accounts to see the new addition, and finally start playing. The upside is that those storefronts frequently have incredible sales on games new and old.

In terms of actually “owning” your games, GeForce Now is also one of the safer choices for cloud players. In the event that Nvidia ever decides to shut down their cloud streaming service, you would still own all of those same games on Steam. From there, you could move to another cloud platform like Shadow or buy your own gaming PC.

One thing I find worth noting is Nvidia’s stance on cloud gaming in a broader sense. It’s undeniable that Nvidia is pushing the boundaries of what game streaming can do, but it seems to be doing so as a showcase of the capabilities of Nvidia GeForce graphics cards. Case in point, the current highest tier of GeForce Now subscription is called “RTX 3080,” named after the company’s 2020 graphics card.

It’s my opinion that Nvidia wants to remain in the business of selling graphics cards, and that GeForce Now is a subtle avenue for doing so. Once you get a taste for PC gaming — even if it’s being streamed — it’s hard not to want a gaming computer of your own.

This is perfectly fine, and I can’t fault Nvidia for it. However, so long as GeForce Now remains focused on simply streaming traditional PC games, we won’t see the kinds of cloud-first or cloud-exclusive experiences that Stadia once championed.

In terms of building a community, a task at which Google Stadia managed to excel, GeForce Now is in an interesting position. As each game you play through the service is launched through an existing platform like Steam, Epic, or Ubisoft, you’re able to access your full friends list from each.

There’s no need to make “GeForce Now friends,” like you needed to make Stadia friends. Despite that, Nvidia has still put effort into creating a feeling of community into GeForce Now, or at least building a relationship between itself and its players. Each week, there’s a new “GFN Thursday” blog post that serves as a catchup for the latest releases and a look at what’s ahead.

In some ways, GeForce Now offers the best of both worlds. You’ll never have issues finding someone to play games with, and you can connect with a fledgling community of other cloud gamers, if you so choose.

Nvidia GeForce Now is built on at least some of the same core tenets as Google Stadia, making gaming available on almost any screen. The service also manages to match and even exceed Stadia’s level of quality and latency, while keeping things mostly easy to use for those with no PC gaming experience.

For my personal gaming time, I can very easily see myself using GeForce Now as my preferred platform now that Stadia is shutting down. My only wish is that GeForce Now would pursue some of the grander ambitions for cloud gaming that Stadia had once advocated. Between now and November 20, Nvidia is offering a special deal on GeForce Now Priority tier that will net you a six-month subscription for just $29.99. Plus, just in time for the holidays, the company is also offering physical and digital gift cards that should make fantastic stocking stuffers for the gamers in your life.