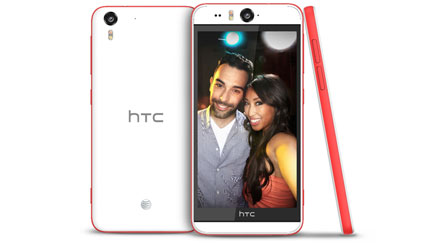 AT&T’s known for snagging exclusive devices and while the carrier’s latest efforts probably didn’t pay off too well, it’s still trying to land the next big thing. Today, Ma Bell announced that it will exclusively offer the recently announced HTC Desire EYE and that it will also sell the Taiwanese manufacturer’s new RE camera. AT&T’s press release was mum regarding pricing and launch dates, only saying that it will carry the Desire EYE later this holiday season and that the RE is expected to follow later this year.

Yesterday, during a press event in New York City, HTC confirmed that its new camera will sell for $200, so we expect that price point to stick, unless AT&T works out some type of bundle or financing package. As for the selfie-loving Desire EYE, it features a 5.2-inch 1080p display, a 2.3GHz quad-core Snapdragon processor, 2GB of RAM, a 2,400mAh battery and Android 4.4 KitKat. While these specs are reasonable, the handset’s standout features are its dual 13-megapixel cameras (front and back) that ship with motion tracking and voice recognition software.

With both devices due out later this year, we’ll continue to keep an eye out for their pricing and release dates.

DALLAS, Oct. 9, 2014 – AT&T2 confirmed it will be the exclusive carrier for the HTC Desire® EYE this holiday season. AT&T also confirmed today that it will offer the RE™ by HTC, a point-and-shoot camera later this year. Pricing and full availability for both products will be announced at a later date.

HTC Desire EYE boasts a 5.2-inch full High Definition display (1080p), stylish design and powerful 2.3 GHz Quad-Core processor – all on the nation’s most reliable 4G LTE network1 that reaches more than 300 million Americans. The smartphone enables you to capture amazing “selfies,” even in low-light with its 13MP front facing wide-angle camera and dual LED flash. The front and rear facing 13MP cameras with motion tracking and voice-activated software allow you to capture more background and wider group shots with smile capture or voice command. Share everything on your screen in real-time to get quick feedback from your friend or show off your photos. HTC Desire EYE is also IPX7-compliant, making it water-resistant up to one meter under water for 30 minutes.3 The HTC BoomSound™ front-facing speakers include a built-in amplifier boost volume for powerful and balanced sound.

Additional features of the HTC Desire EYE include:

RE by HTC has a 146-degree, wide-angle lens that captures everything you see in full view, replacing the need for a viewfinder. With a 16MP camera sensor and 1080p High Definition video, you can capture your world with high quality photos and video. RE easily integrates with both Android and iOS devices to back up your photos and videos to the cloud. Just grab, point and shoot with RE’s intuitive controls. The grip sensor is always on and wakes the capture capability when picked up. Simply tap the shutter button to capture photos or press and hold to take videos. RE is also IPX7-compliant.3 This means you can capture the fun up to one meter underwater for 30 minutes without a protective case. RE can connect to your smartphone with the companion RE application using Bluetooth. The RE app can transfer all of the photos and videos from your RE to your smartphone and can also back up your content to third-party cloud services such as Google Drive and Dropbox.4 The app also serves as both a content browser and live viewfinder on your device, mirroring what the camera is seeing.

AT&T is focused on giving our customers a top-notch experience through fast and friendly service. Being recognized as the highest ranked wireless provider for overall purchasing experience by J.D. Power, 5 for the third time in a row, shows this commitment to the customer experience is making a difference.  AT&T outperformed competitors in the J.D. Power 2014 Volume 2 study and received the “Highest Satisfaction with the Purchase Experience among Full-Service Wireless Providers, Three Times in a Row.”

For more information about the HTC Desire EYE, visit www.att.com/DesireEye.

1Reliability based on nationwide 4G LTE networks. LTE is a trademark of ETSI. 4G LTE not available everywhere.

2AT&T products and services are provided or offered by subsidiaries and affiliates of AT&T Inc. under the AT&T brand and not by AT&T Inc.

3IPX7 rated (water-resistant), submersible up to 1 meter for 30 minutes with covers tightly closed. Rinse to remove any residue. Not shockproof.

4Requires iOS 7 and Android 4.3 or above Bluetooth enabled companion device.  Data usage may apply to transfer and backup services.

5AT&T received the highest numerical score among full service wireless providers in the proprietary J.D. Power 2013 (Vol. 2) and 2014 (Vol. 1 & 2) Full Service Wireless Purchase Experience StudySM. 2014 Vol. 2 based on responses from 10,079 consumers measuring 4 full service wireless providers and measures opinions of consumers who purchased a wireless product or service within last 6 months.  Proprietary study results are based on experiences and perceptions of consumers surveyed January-June 2014.  Your experiences may vary. Visit jdpower.com.