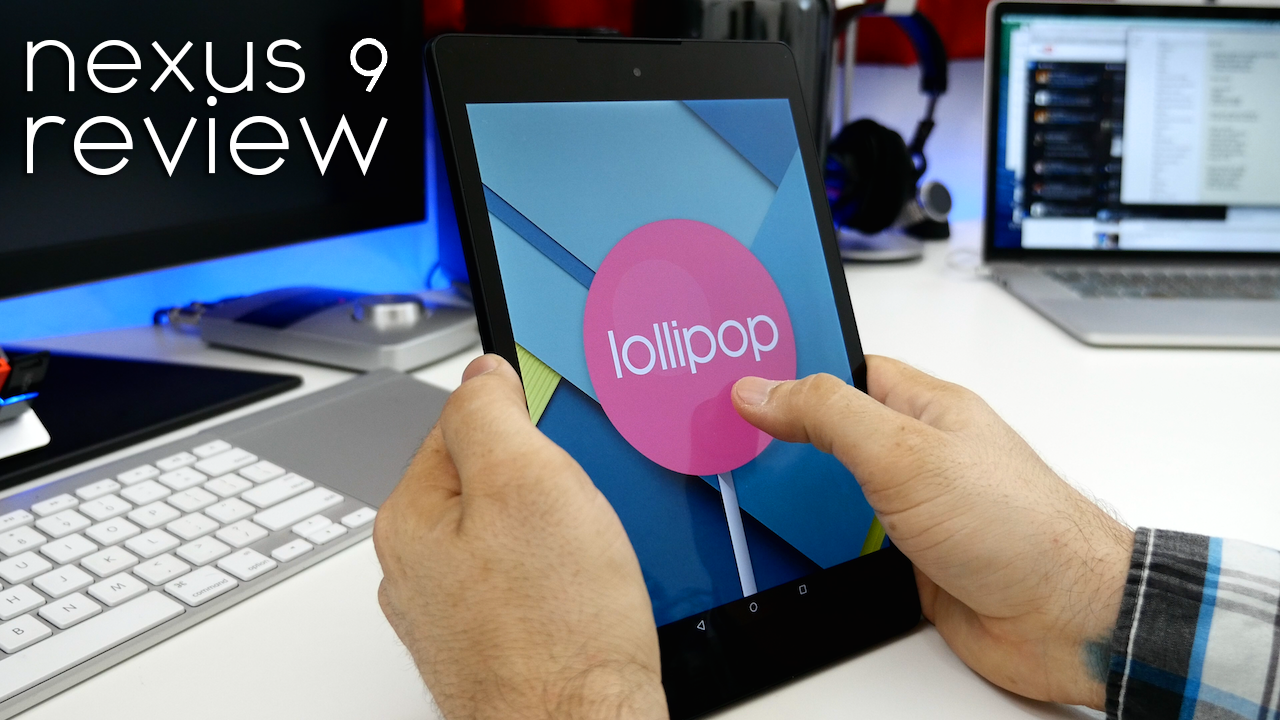 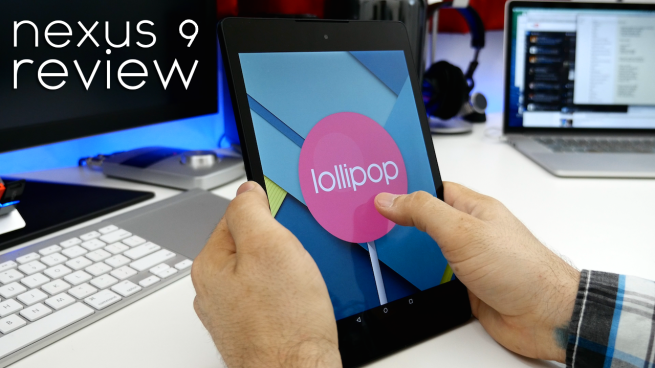 It’s been a while since we’ve seen a new tablet from Google. The Nexus 7 was released in 2013, but Google’s large format Nexus 10 has been growing old since its debut in late 2012. Well, the Nexus 9 seems to be a happy medium between the previous releases, and like it or not, it’s here to replace both of them.

Android tablets haven’t always offered the greatest experience when compared to smartphones, but there’s one word that perfectly describes the change this market needed: Lollipop. In my opinion, Android 5.0 is the best thing that has happened to the tablet space in a while, and the Nexus 9 is the first place you’ll officially get to see it in action. That being said, there are a lot of factors aside from a pure software experience that make the Nexus 9 a great device.

Welcome to our full review of the HTC-made Google Nexus 9. Has Google made a triumphant return to the tablet space, or is this just something to tide you over until another company steps up to the plate? Let’s go ahead and find out…

On the inside, the Nexus 9 is packing some heat. Quite literally when in operation, but I’ll get into that a little later. The Nexus 9 is powered by a 64-bit NVIDIA Tegra K1 dual-core processor clocked at 2.3GHz, a 192-core Kepler GPU, 2GB of RAM, and a 6,700 mAh battery.

It’s bordered by a smooth brushed metal frame and delivers an 8.9-inch display with a resolution of 2,048 x 1,536 (287 ppi) that’s covered in Gorilla Glass 3. Overall it’s a bright, crisp, and colorful IPS display.

Based on design alone, it would be easy to convince someone that the Nexus 9 is the love child created from a Nexus 5 and the NVIDIA Shield Tablet. It takes on most of the design characteristics from both of those devices, but in a slightly different package. That’s not a bad thing in any way, but if you’ve held either of those devices, then you already know how the Nexus 9 feels.

Check out our Google Nexus 9 video review below:

On the back side we have a soft touch plastic material with Nexus and HTC branding and an 8-megapixel camera with an LED flash. I’m not a huge fan of the matte finished plastic on the black version because it tends to get a little grimy after a while, but it’s nothing a small cloth can’t fix with a few passes. Also, on the front side is a 1.6-megapixel camera (f2.4), but like myself, you’ll probably only ever use it for the occasional Hangout or Skype call.

One edge of the Nexus 9 is home to its lock button, volume rocker and a small microphone. Because the buttons sit so close to the body, I found it hard to locate them at times. It’s not a deal breaker, but they don’t protrude enough in my opinion when compared to other tablets. On the top you’ll find a 3.5mm headphones jack, while the bottom makes room for the Micro USB charging port and a secondary microphone. 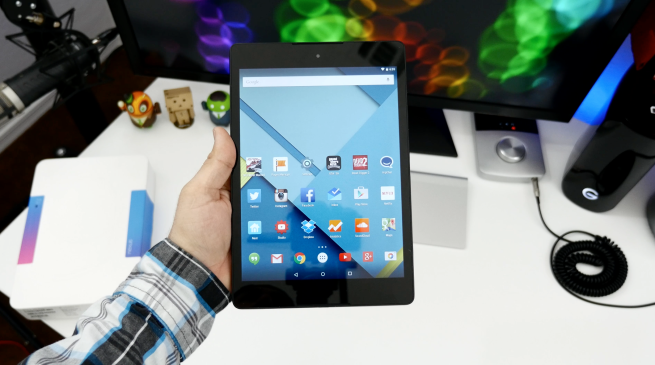 If you’re into consuming media, the Nexus 9’s front facing stereo speakers will deliver the goods. They aren’t the best speakers in the world, but if anyone knows about front-facing speakers, it’s HTC. These BoomSound speakers are a little warm overall, but definitely loud enough to cut through the crowd. There is a limited number of tablets with dual-front speakers and I’m glad the Nexus 9 is a part of that club.

There’s no doubt that the Nexus 9 is built to perform, and because it’s running a clean install of Android 5.0 Lollipop, it has every opportunity in the world to do so. Lollipop makes this tablet a dream to use. This isn’t going to be a Lollipop review, but I’m certain that Google’s latest mobile OS is a life-changing experience for all Android devices. We’ll bring you full thoughts on Lollipop at a later date.

Thanks to its processor and GPU setup, the Nexus 9 flies through tasks like a boss. Multitasking is smooth, animations are slick, and if you’re a fan of Android, then you’ll fall in love with the software experience here. Material design is a big change for Android. Everything is animated and you get a real sense of direction when navigating through the user interface. There’s a nice flow to every transition and the tablet apps have seen a lot of optimization which is always a welcomed improvement. 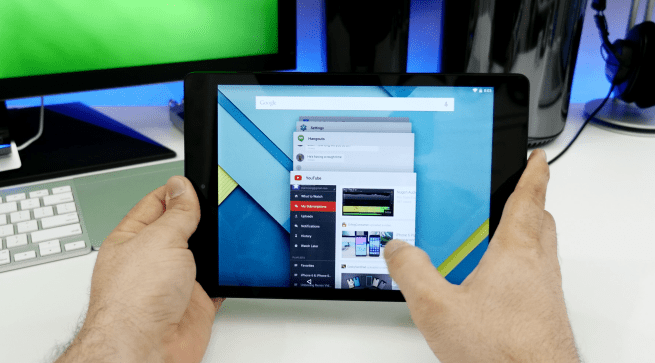 Gaming on the Nexus 9 is a breeze. Though it’s not a difficult task for most high-end flagships these days, the Nexus 9 took on top Play Store titles with ease and stability. One thing I did notice is that the Nexus 9 gets warm to the touch during heavy use. About one fourth of my unit began to warm up in the top corner by the camera when playing games. It wasn’t hot, but warm enough that I noticed it regularly.

With its front-facing speakers, this tablet is a media powerhouse. I enjoyed hours on end of Netflix, YouTube, and the occasional music playlist. As I mentioned before, the speakers aren’t fantastic, but the fact that they are front-facing makes them miles better than all of the rear-facing competition. Speaking of the camera, performance is just okay. The Nexus 9 features an 8-megapixel sensor, but I was never too impressed. I’m sure there won’t be many out in the wild shooting pictures with a Nexus 9, so I classify the camera on this tablet as a free, extra feature. It’s not great, but it’ll do alright if you’re in a pinch. Just make sure you’re shooting environment is perfectly lit and it’ll capture mostly passable photos.

With a 6,700 mAh battery inside of the Nexus 9, I definitely expected above average performance. Under my average to heavy tablet usage (watching a couple of movies, playing games, using Twitter, Facebook, listening to music, and browsing the web) I experienced around 5 to 5.5 hours of screen-on time. This seemed like a fair number considering my usage, but we’ve also received an OTA update during the review period that has improved this area. That being said, I think Google’s estimated 9.5 hours of Wi-Fi browsing isn’t too far off, but it’s likely that future software updates will extend the battery life even more.

So what’s the verdict? Well, at $399 for the 16GB model, the Nexus 9 is hard to pass up. Keep in mind, there’s no Micro SD card slot, so you’ll be stuck with its existing storage configuration. Overall, it’s a sleek mid-sized tablet that’s perfect for those on-the-go and currently, it’s the only one shipping with Android 5.0 Lollipop. With the Nexus 9, you’re getting Google’s idea of the perfect tablet experience. It’s fast, thin, light, and optimized to run like a beast. There may be a few hit or miss areas about the Nexus 9, but overall it’s a complete package for those looking for an unadulterated Android experience on what Google and HTC consider the latest and greatest in tablet technology. While it may not be perfect in every area, the Nexus 9 is definitely a solid tablet that Google can lead the pack with for the next year or so. If you’re coming from an iPad, we’ve put together a head to head review that you should definitely check out.

Is it worth your hard-earned cash? If you’re looking for the purest form of Android on a tablet, the Nexus 9 is the best you’ll find. If you’d like to pickup a Nexus 9 for yourself, it’s currently available via Amazon or on the Google Play Store.