Google Nexus 9 head to head: coming straight from a year with the iPad Air

I’ve been an iPad Air user for a solid year. Sure, I’ve tried tried and reviewed other devices, but my go-to device for reading at night, some light work on the train or plane and just brain dead playing Facebook/Twitter/G+/Reddit/Email/Video chatting has been the Space Gray iPad Air 16GB.

Before the Air, I had used both of Google’s Samsung Nexus 10 and Asus Nexus 7 (2012) tablets and found them OK devices. The Google I/O version Nexus 7 power supply broke about 8 months in and I didn’t bother getting it fixed. The Samsung Nexus 10 was actually an under-rated device, in my opinion, probably mostly because the initial software wasn’t as polished as it should have been.

So with the Nexus 9, Google has had a long time to get its software right, and I shouldn’t have gotten déjà vu when I started using the Nexus 9, right?…

Part of the déjà vu is the backing on the Nexus 9. It feels like the same material as the 10 and that’s not a bad thing necessarily. It feels great in the hand without a case rather than cold metal of the Air.  You feel the soft rubberized back, but now there are metal sides which make it feel stronger.

The flip side of that is the material gets marked up with greasy hands and picks up dust easily. Sure, it is easy to remove with a wet wipe, but no one wants to do that. The iPad’s aluminum requires a lot less cleaning, unless you choose a case, like I always do with iPads.

The displays to me seem pretty similar. I don’t detect pixels on either without serious inspection and even then I’m not sure if I’m seeing pixels or my eyes are just giving out. The display of the Nexus 9 matches up with Apple’s iPad Air pretty well in colors and brightness. To my non-expert eyes, they are very similar.

Apple has released an improved screen with the iPad Air 2, but most reviews say in real world, they are similar. To my eyes, I can’t tell the difference, but I haven’t used both outside together to see the difference. I’ll update this when I have.

The size of the display is pretty similar. Google has more pixels in a 0.8-inch smaller size. It is noticeable, especially when the devices are placed next to each other, but in real world use, the extra pixels don’t help and the extra size of the Air isn’t a big advantage.

The Nexus 9 is thicker than the iPad Air and therefore “more thicker” than the Air 2. I really don’t care much about thickness as I do weight. In this department, the Nexus 9 is lighter (425g) than the Air (469g) or the Air 2 (437g).  I’m not sure if it is that little bit of weight or the plastic back and smaller size but for long sessions, the Nexus 9 feels better in the hand.

I like the easy home button on the Air to open up the tablet rather than searching out the power button on the side, but with some muscle memory training, it becomes less and less of an issue.

Even though it is becoming more accepted because of their amazing displays, I still don’t like taking pictures with tablets. That said, the Nexus 9 shooter performs admirably and as well as any tablet I’ve tested.  I didn’t go deep into the features here, but if you’ve used Google’s camera app, you’ll feel at home. Below is a sample image cropped but otherwise untouched I grabbed quickly this morning (click to enlarge). The front camera works well for Hangouts. Just like on the iPad Air with FaceTime, the limitation is always the compression and the bandwidth, not the front camera. 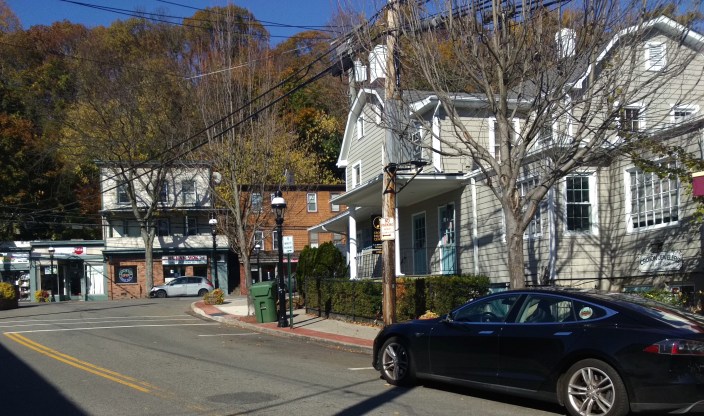 One area where the Nexus 9 absolutely destroys the iPad Air is sound. HTC’s front facing Boom sound and stereo speakers are heads and shoulders above the bottom facing iPad Air speakers. In many cases where I’d want to grab an external Bluetooth speaker on the Air, I am perfectly happy with the Nexus 9’s built-in sound. Clearly, a set of half inch thick speakers aren’t going to match up with even midrange portable speakers, but it is nice to not have to hook into something else to enjoy a quick video or song.

The software is where Apple’s iPad has always shined above the Nexus line and other Android tablets and sadly that’s still the case…but not by much.

With Lollipop, Android is much more fluid on a big display. I really like it a lot. It is just pleasant where previous versions of Android have been a string of successively improving UIs. I feel like with 5.0, Android is at Apple’s level overall. Better on some things and still needing improvement on others. 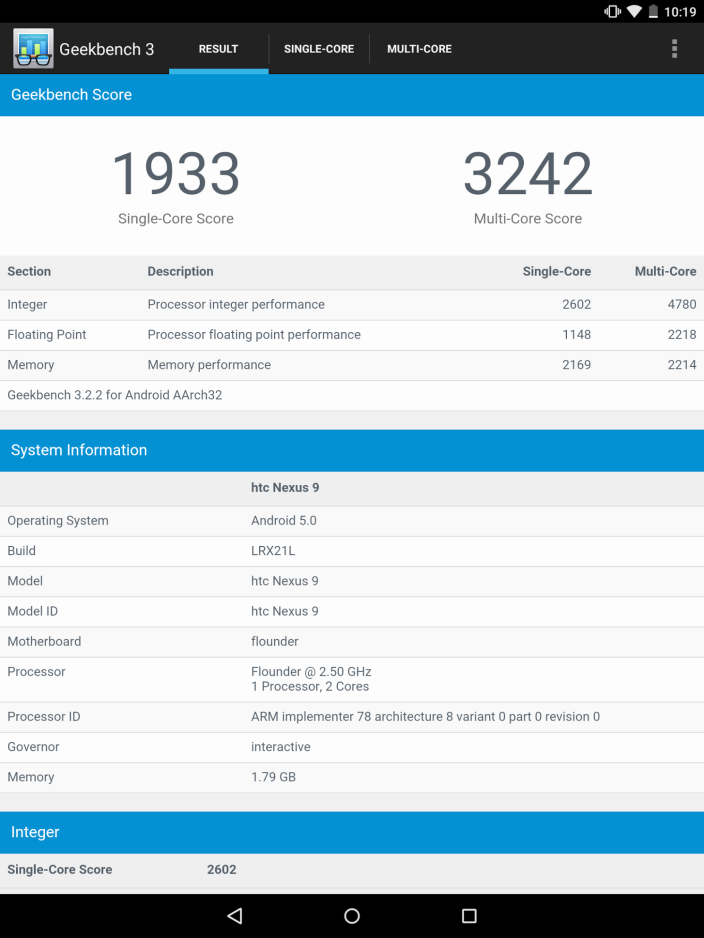 But there were still some issues and they went beyond the fit and finish you get with an Apple device release. Google/HTC issued a last minute software update last night which helped the reliability of apps and gaming, but clearly they are rushing this out the door a little bit. I experienced a restart in the middle of Gmailling and another in the middle of a Hangout.

My son, who does the gaming in the family and is used to using the iPad Air, had few problems, but he did note that there were some glitches in the gaming.

A lot of this is typical for a new hardware and software platform being released simultaneously that is being released widely, and in that context, the Nexus 9 performed admirably.  But there are some glitches that may mute the acceptance and adoption of this otherwise pretty amazing device.

If you are considering buying an Android tablet and want to drop $400, the Nexus 9 is a no brainer in my opinion. The skins that LG and Samsung put on their Android devices ruin the experience for me and that shows no sign of abating. As for the iPad Air, it is really an ecosystem experience question at this point. Google’s apps are integrated better and if you are a Google apps user this puts the Nexus 9 ahead of the Air. If you are in the Apple ecosystem, there is no standout feature in the Nexus 9 that puts it ahead of the iPad Air/2.

What’s new here is that Apple can no longer say that iOS is a superior tablet experience over Android. Welcome to the Lollipop era.

The one caveat I’d add is that there is a really, really good 6-inch tablet coming soon that might make all of this talk moot.