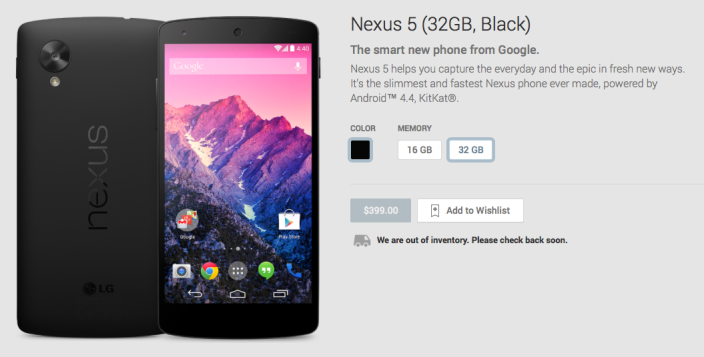 With the Nexus 6 now on the market, Google today has stopped offering the Nexus 5 in red and white, leaving only a black variant on the Play Store. Google is obviously looking to cut down its production of the Nexus 5 and this is one of the easiest ways to do so while continuing to offer the device for those who don’t want the monstrosity that is the Nexus 6 (via Android Police).

Google still offers the black Nexus 5 in either 16GB or 32GB, although availability is questionable as we head into the holiday season. The 16GB model runs $349 while the 32GB model costs $399. Google still touts the Nexus 5 as its “smart new phone,” despite a successor having already been released. And it also still advertises that the Nexus 5 is powered by Android 4.4 KitKat, even though Android 5.0 Lollipop is available.

If you were looking to purchase a red or white Nexus 5, you better head to third-party retailers and eBay before they start jacking up the prices. After all, the red and white models are essentially extinct at this point. Keep in mind that we generally see much better deals on the Nexus 5 in black than what Google is currently selling it for. Check out 9to5Toys for all that information.