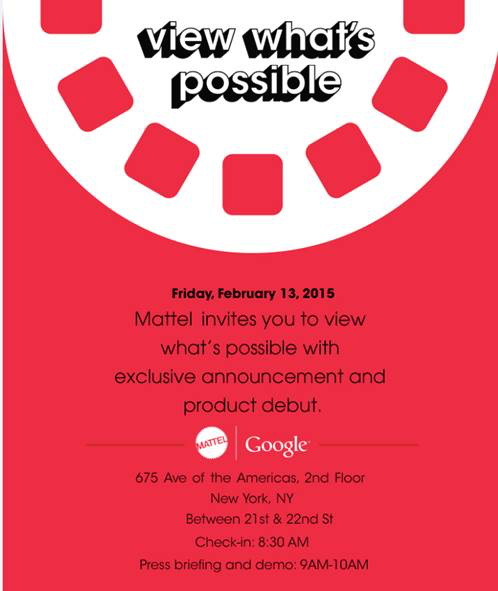 Mattel and Google have sent out press invites for an event they’re holding together on February 13th in New York City. The invitation, sporting the tagline “view what’s possible,” includes reference to what looks to be a reel from the old View-Master toy from the mid-1900s.

There’s no way to know for sure what the two companies have in store for us, but it’s safe to say that it will likely be a toy of some kind. Making reference to the View-Master makes us think that maybe Google will bring technologies from Cardboard (or Google Glass?) to one of Mattel’s upcoming products…

Maybe a new View-Master updated for the digital age is in the pipeline?

Google is definitely making moves into the lives of a younger audience in general, and just yesterday it was announced that Launchpad Toys and its popular iPad app Toontastic were acquired by the Mountain View company.

As I mentioned in my roundup of things to expect from Google this year, introducing kid-friendly versions of many of its services is going to be a big focus for Google in 2015.