Google’s self-driving test cars have been involved in a total of three fender-benders since being licensed for use on public roads last September, a new AP report revealed today. All four of the accidents have been at speeds of 10mph or lower, so there hasn’t been any serious damage done yet.

One other autonomous car created by Delphi Automotive has been involved in a low-speed collision. The big difference between the two companies’ situations is that while Delphi only has two cars on the road right now, Google is currently running fifty of them. Strictly speaking in terms of percentages, Google has had much better luck.

Both companies say that their vehicles were not at fault in any of the accidents, but accident records are confidential under California law, so it’s impossible to verify those claims. To help dispel any possible uneasiness about the technology, Google said that its cars have driven around 140,000 miles since hitting the streets in September. If you include time spent on private testing tracks, the technology has driven over 700,000 miles by itself.

In two of the four accidents reported, human drivers were in control of the vehicles.

Regardless of that fact, Google’s self-driving cars still have a higher accident rate than regular drivers. The national average for what is referred to as “property-damage-only crashes” is only 0.3 accidents per 100,000 miles, although it could be argued that since the autonomous automobiles were not to blame for the accidents, they technically maintain a perfect driving record.

Update: Google has responded to this report on Twitter by noting that after logging nearly 1 million miles of driving experience, the self-driving car technology had yet to cause an accident. The tweet also linked to a Medium post written by the head of the project.

In the post, Chris Urmson claims that the automated cars have racked up 1.7 million miles of drive time and says that some accidents are “unavoidable” due to the reality of physics. He brings in some additional stats, pointing out that Google’s cars are now driving themselves around 10,000 miles a week—almost as much as the average American drives in a year.

Urmson also reveals that his company’s vehicles have been in a total of 11 accidents in the 6 years since the project began. As noted above, the car itself was never the cause of the accident, and none of the collisions involved anything more than minor damage.

Seven of these accidents were rear-end collisions. Some took place at stop lights, while others happened on the freeway. One accident was caused when another driver ignored a stop sign, and a few others involved the Google car being sideswiped by other drivers.

After each accident, Urmson says all of the data regarding the crash is reviewed so that the company can take away some lesson from the incident. 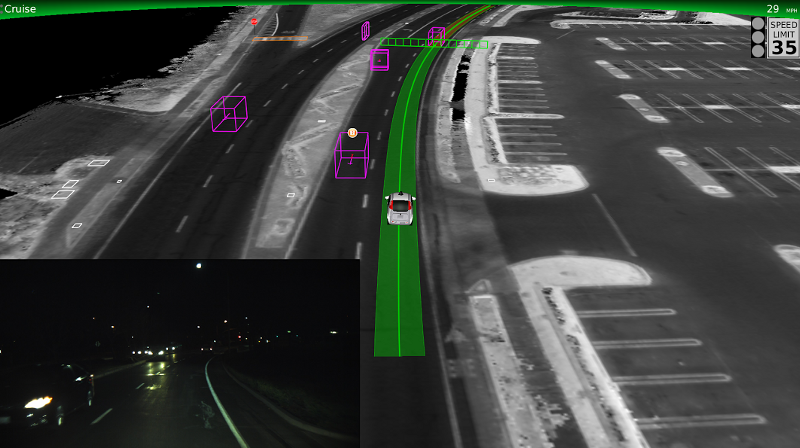 Some images in the post reveal interesting scenarios encountered by the cars as seen through their software. In each of the instances mentioned, a driver on the road made an unexpected turn or drove on the wrong side of the road, and the computers navigating the Google car responded automatically to prevent a crash.