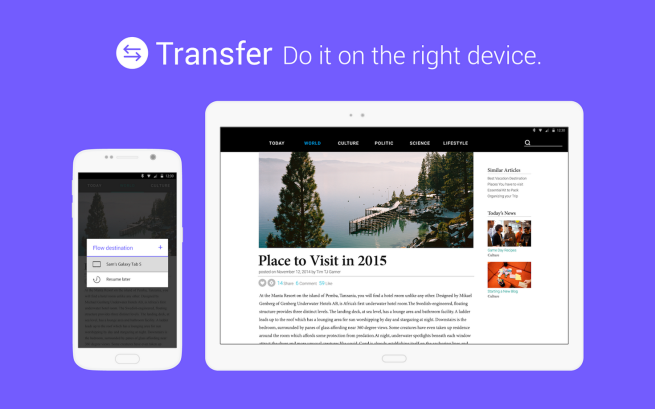 Late last year Samsung used a punchy video on YouTube to introduce a new platform “that allows users to seamlessly transition their activities across their devices.” They called it Samsung Flow, and today it has finally become available in the Google Play Store with the “beta” moniker slapped to the end of its name.

The idea behind Flow is that as you move throughout your day, you’re going to be using a bevy of different screens with different sizes and shapes — some of which will live in your pocket while others might live on your wrist – and not all tasks will be perfect for the one you’re using at any one moment. Maybe you open a spreadsheet from your phone but decide there’s just too much data on it to make any changes from your tiny, 5-inch phone screen. With Samsung Flow, sending that spreadsheet and where you left off in it to your tablet or desktop is theoretically not much more than pressing an Android intents share button. These are the four types of “transitions” Samsung says are currently supported:

In practice, however, it probably won’t be as straightforward and simple as it seems — at least not for the time being. Samsung Flow only works over a Bluetooth connection, and even then it only works between seven currently supported Samsung devices. You can’t, say, send a YouTube video from your Galaxy S6 to an HTC Nexus 9. Limiting Flow’s potential even more, it only works with links, app intents, and a small list of apps where the developer has baked Flow buttons directly in.

What this all means is that to actually use Samsung Flow to its full advantage, you have to satisfy some strict requirements:

One example of a “deeper” integration with Flow is within Samsung’s video player, with which you can begin to view a video and then share the video from where you left off to a different device. The potential of that is very intriguing, for sure. But Samsung’s video player is one app and so this only becomes really useful when the wider developer ecosystem bakes Flow into their apps, which seems unlikely, at least for now, with Flow’s limited support and the rigid requirements to actually use it.

It is a beta, after all, so we have to give them some leniency in regards to expanding compatibility and functionality later on. But we have to hope they will actually do so. If this actually is Samsung’s response to the Continuity feature in iOS and Mac OS X, it needs a lot of work.

Flow only works on the Galaxy S6, S6 Edge, Galaxy Alpha, Note 4, Galaxy S5, and Tab S tablets right now. If you have one of those – sorry, two of those – you should give it a try.