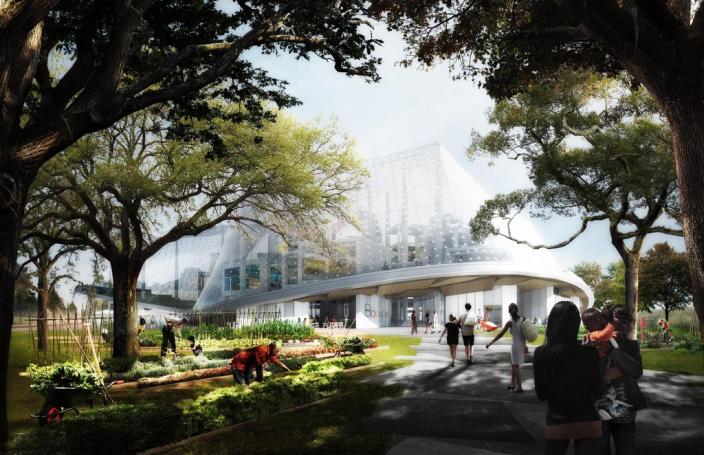 Earlier this month, details regarding Google’s upcoming “hackable” headquarters in Mountain View emerged, suggesting that the building will be built partially by “crabots.” The crabots are a mash-up between cranes and robotic machinery and will be used extensively in designing the interior of the company’s new headquarters. The Sillicon Valley Business Journal now reports that Google has submitted plans at Mountain View City Hall for these headquarters. The translucent domed building is expected to be 595,0000-square-feet and located near the company’s existing headquarters.

Earlier this month, The Mountain View City Hall rejected Google’s plans for a four site network of interconnected structures and gave the land to LinkedIn. Google, however, already has the building rights for the 18.6 acre property on which today’s proposal will be built. The location overlooks Charleston Park. Google plans to build 595,000-square-feet of office and commercial space on the property.

The design of the building is the same as what was reported earlier this year. Designed by European architects Bjarke Ingels and Thomas Heatherwick, the building will feature a glass roof and is expected to be Google’s “showpiece” property.

Google’s continued expansion efforts highlight its goal to stay in Mountain View and to help the city continue thriving. Google’s vision is to connect all of its buildings with a network of trails. Google’s proposed Charlestown Park plans submitted today still most go through environmental and city review, but are expected to clear.