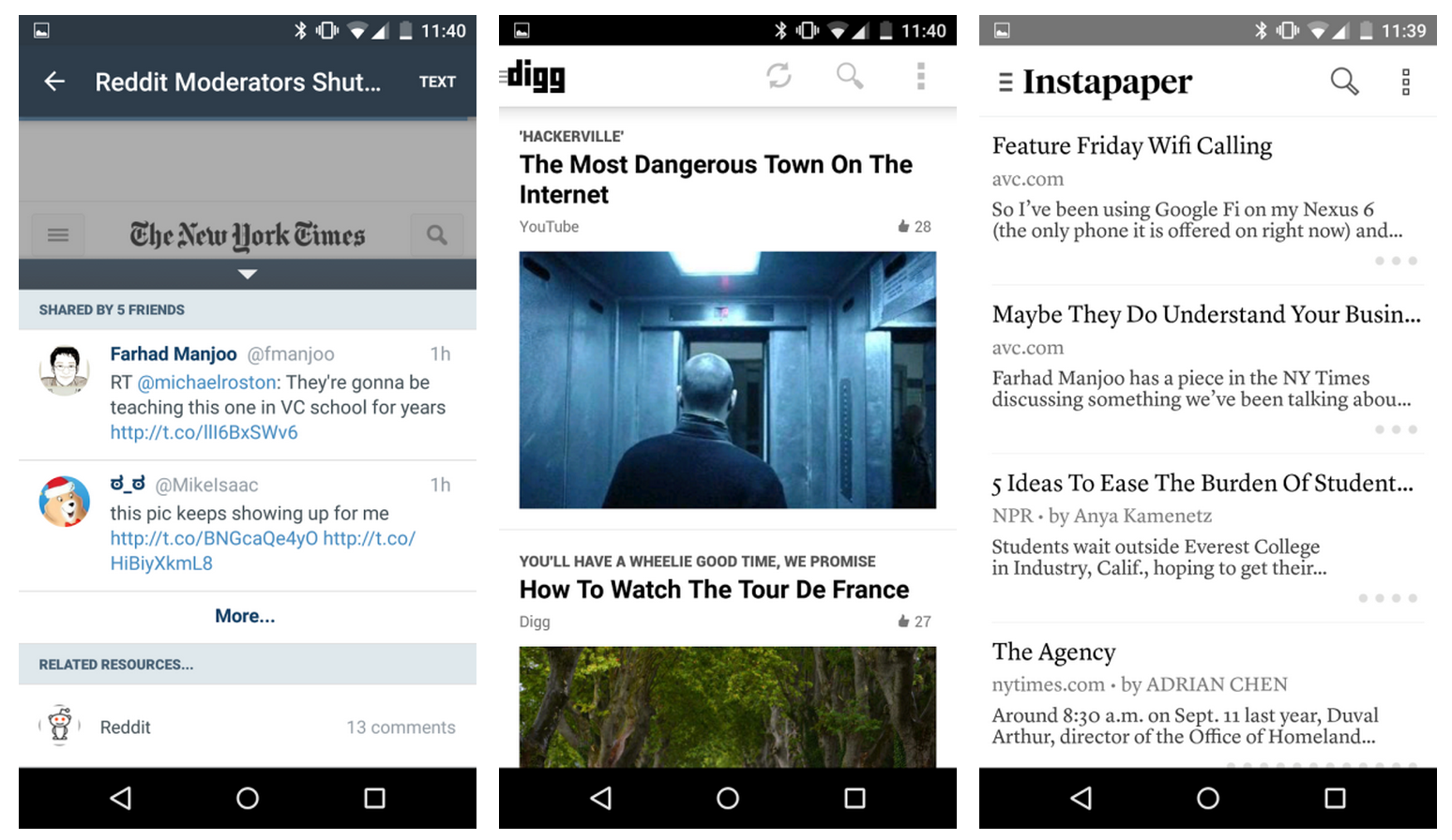 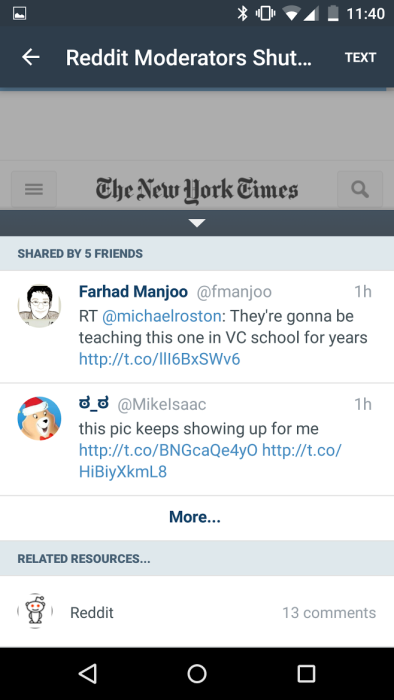 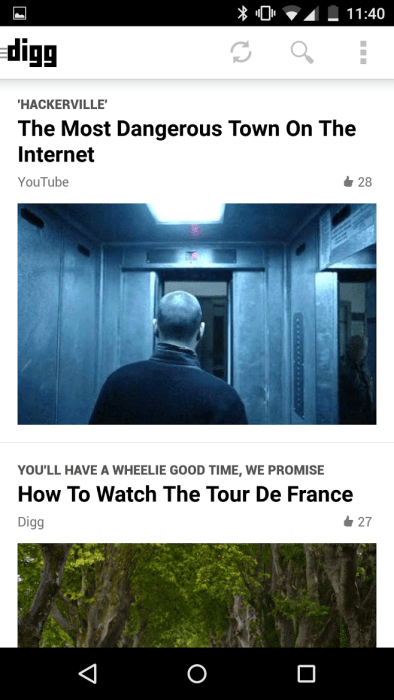 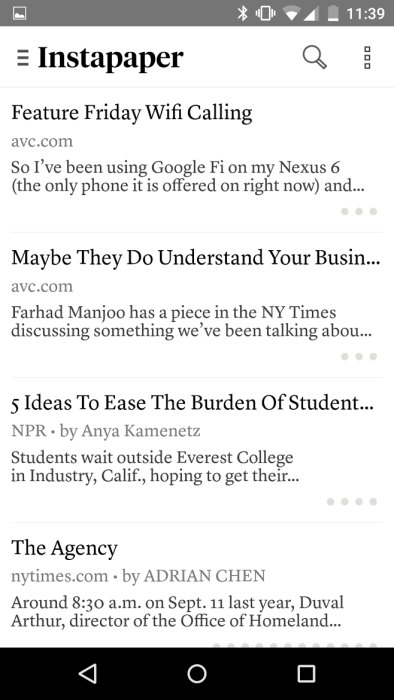 With the recent death of Circa News, the bulletpoint-style news app, it’s worth looking again at some apps that can help with this problem. Below are three of my personal favorites. 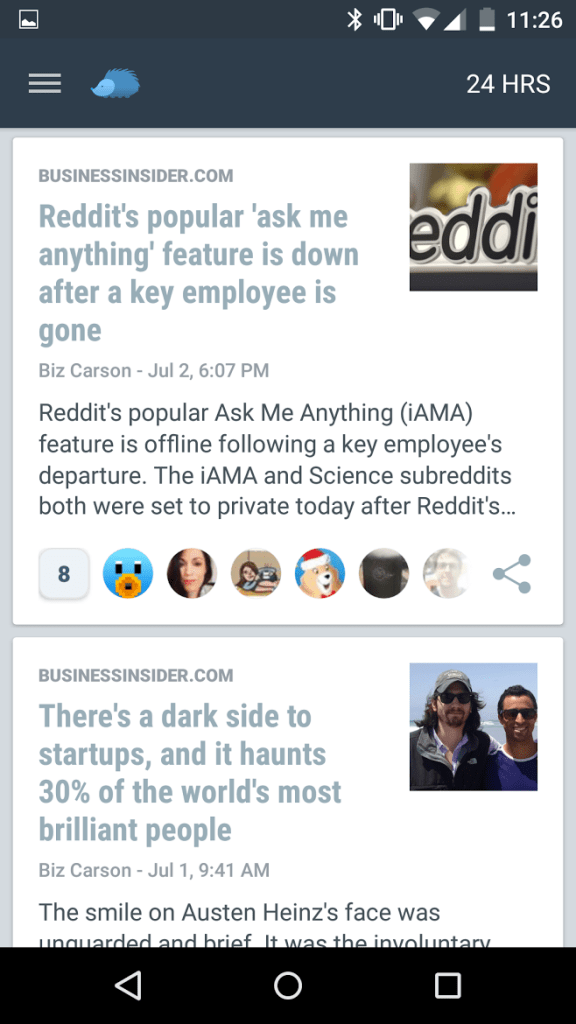 If Twitter and Facebook are a firehose of everything those inside your circle are talking about, Nuzzel (Google Play) is a list of just the stories they’re talking about the most. Straight away from launching the app you’re presented with a card-style interface of the most shared stories from your friends and those you’re following with the story titles, the first few sentences, and the website they’re from. Inside each card below the preview of the story is a horizontal list of circular icons for each of your friends who shared the story, and you can even see the Facebook post or tweet in which they shared it – useful when you want to see what those you care about are actually saying about the story.

The default view shows the most popular stories in your network for the past 24 hours, but you can get even more recent stuff by drilling down to the most shared stories in the past 8, 4, or 2 hours, or even the last hour. And there are other types of feeds as well, the most interesting type being those of other individuals. You can actually view a feed of stories based on the network of one of your friends or followers. Maybe you think they just follow more interesting, diverse people than you, for example.

Nuzzel will come in handy particularly for those who use Twitter, as (at least for now) the social network is ordered reverse-chronologically (newest stuff first) and doesn’t surface content to the top based on popularity – once a tweet gets pushed down your feed, it’s gone. If you follow more than 50 people on Twitter and don’t look at it for even a few hours, it’s easy to feel anxious that you’re missing a lot.

Yes, I know you’re probably thinking, “Digg still exists?” But trust me, it’s not the Digg you may remember from the days when we referred to new sites on the Internet as being “Web 2.0.” The new Digg (Google Play) is simply the most interesting stories from around the web, curated by a team of human editors. It tends to lean heavily in the technology direction, but that’s not surprising as technology is arguably embedded everywhere in pop culture today. 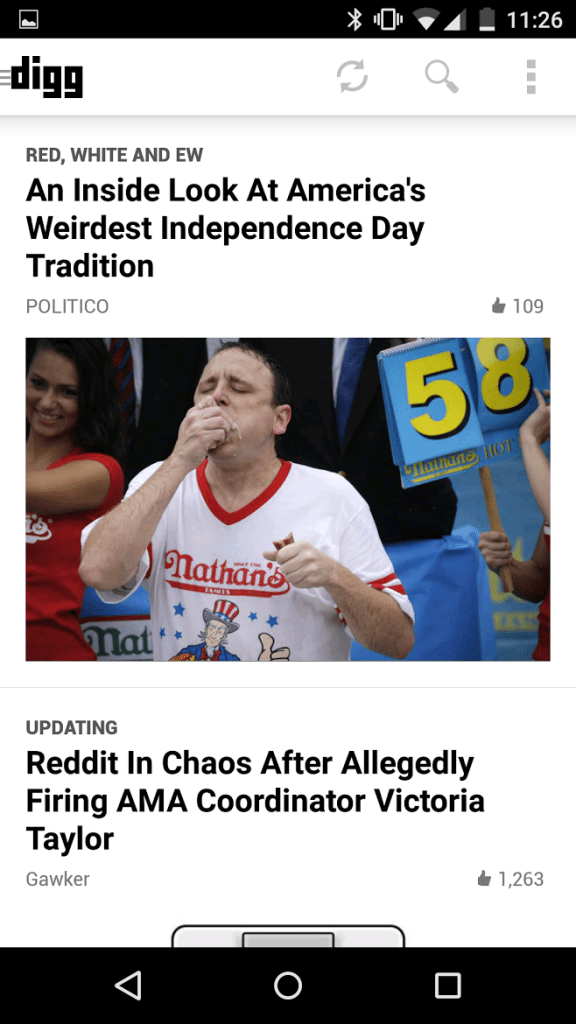 It has a good balance of stories, though, which is what I like about Digg. Funny, educational, random – it’s all there, a solid mix of stories to inform and give you new perspectives on topics you perhaps don’t think about much in your day-to-day life. There’s also a video section when you just want to veg out to some funny and weird stuff. 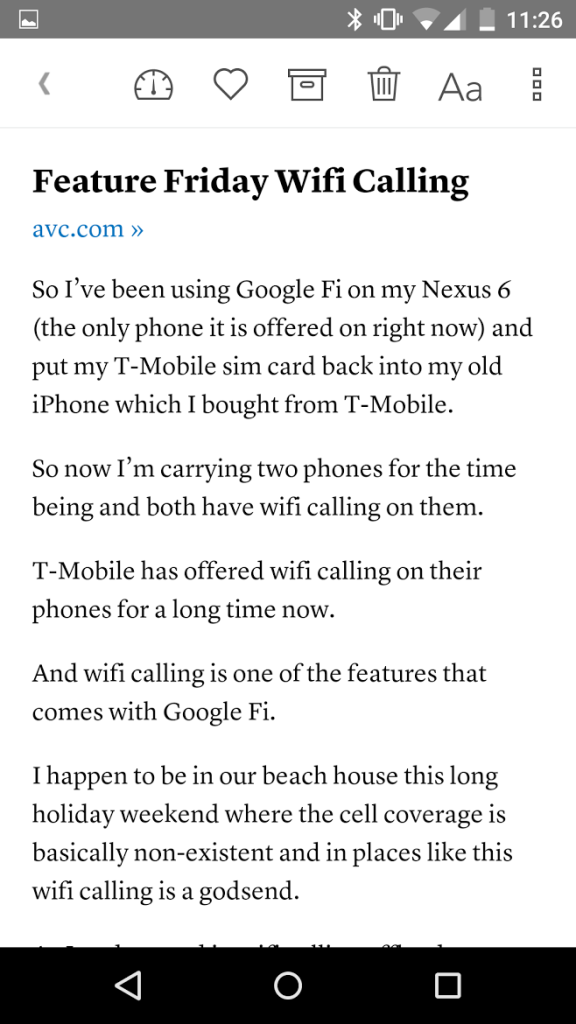 Instapaper (Google Play) has been around in mostly the same form for a long time now, so many of you have probably heard of it, but under its new management it’s been pushing lots of new, well-received changes. For those who don’t already know, Instapaper is a read later service which makes it easy to collect all the articles you don’t have time to read, but want to, in one place. Like the Reader Mode from Safari and Firefox, articles saved to Instapaper are stripped of everything except the most important details to the reading experience – the title, story, and source URL. What makes Instapaper special in my mind, though, are all the extra customization options and features that make it possible to tailor the reading experience to nearly everyone and anyone’s reading styles.

There’s a function called Speed Reading, for example, that cycles through stories one word at a time, at whatever speed you choose. You can also adjust font size and color, word spacing and paragraph width, and the brightness of the screen while reading stories. Other functions include the ability to make highlights and bookmark videos from YouTube or Vimeo.

The developers of Instapaper also keep up their blog with regular updates on new changes, recently introduced a public API, and integrate with other major services like Evernote. There are a lot of recipes on IFTTT that you can use to enable automatically sending new stories from RSS feeds and websites to Instapaper, which is nice too.

The reason I chose these three apps is simply that together they can keep you updated on what’s happening in your circles of interest without too much noise (Nuzzel), provide you with new perspectives on topics in areas you don’t follow closely day-to-day but that are important nonetheless (Digg), and ensure sure you don’t lose the stories that interest you most but don’t have time to read in the moment (Instapaper). Besides embeddable chips that feed and register new information into our brains automatically, that’s basically as good as it gets.