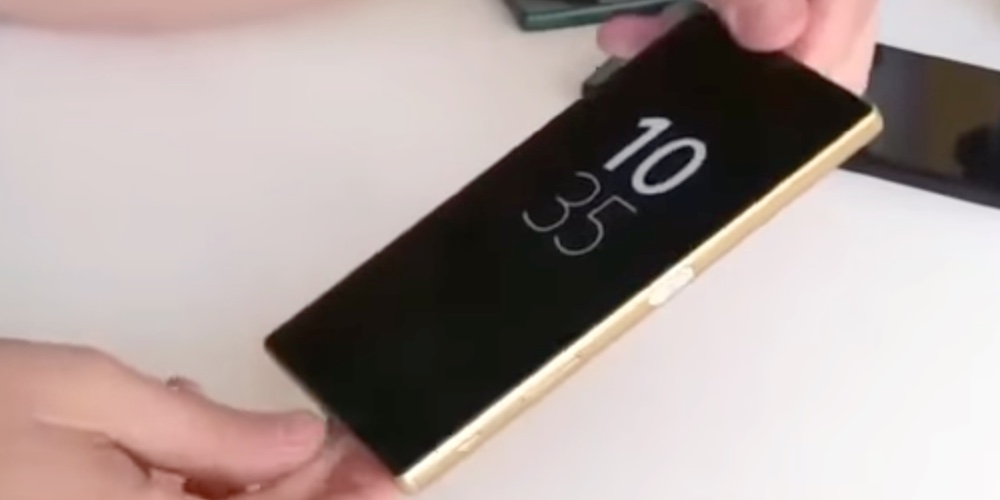 Ahead of its official press announcement in Berlin later this week, Sony’s upcoming flagship smartphone family has been shown on video in what appears to be a pre-release interview recording with press, which somehow managed to find its way to YouTube. The video is in French, and YouTube’s auto-translating tool isn’t the hottest. Still, we’re now expecting Sony to release a trio of smartphones.

The Xperia Z5 family will likely be made up of a 5.5-inch Premium model, a 5.2-inch ‘regular’ Z5 and a Compact 4.6-inch smartphone. Although the video suggests the Z5 Premium will have a 4K resolution display over 5.5-inches, I find that highly unlikely. I think, instead, there’s some confusion over Quad-HD and 4K, and that it’s more probable that will see a QHD (1440 x 2560) resolution screen (as suggested by XperiaBlog yesterday). Alongside the QHD flagship, the regular sized Xperia Z5 will have a 1080p screen, while the Compact model will feature a 720p panel.

In the video, it’s suggested — much like previous generations of Xperia — that the battery is good to last two days on a full charge. This feature has been a staple of the Xperia Z lineup for the past couple of years, and a feature which would surely disappear if the screen on the larger model really was 4K. Still, I’m very happy to be proven incorrect in my speculation. If Sony can cram an 800ppi screen in to a smartphone and still keep a 2-day battery, I’ll be in awe of a company which has been somewhat irrelevant in recent years.

The device will be water and dust resistant, despite having an exposed Micro USB port on the bottom. And, as previous leaks showed, they all have a side-mounted fingerprint sensor built into a redesigned power button which sits flush with the metal chassis. All models in the series will have a new 23MP camera which Sony claims will be among the fastest in the world, with a 0.03 second autofocus and improved lowlight performance. It’s expected that the devices will ship with Snapdragon’s 810 processor. While it’s a product of rumor for now, Sony will announced its next smartphones at a pre-IFA event in just a couple of days time.