Obviously, one big reason that the Chromecast tops offerings like the Roku and Apple TV is price. At $35, the Chromecast has become an impulse buy for many (myself included; I bought a Chromecast Audio — reviewed here — when it launched and have yet to use it personally), and on top of that it’s fairly common for those familiar with the platform to buy several for the many TVs in their household. This compares to the Apple TV, for example, which starts at $149 for the latest model.

Strategy Analyitcs notes, however, that the Apple TV still leads the market in cumulative shipments. The Apple TV has shipped 37 million units (since its launch in 2007), while the Chromecast is nearing the 30 million milestone over the course of two-and-a-half years. Roku has shipped around 20 million units and Amazon has shipped about 10 million.

Clearly led by the Chromecast and Apple TV, the digital media streaming market is growing fast. What Strategy Analytics calls “Connected TV Devices” (which include Blu-ray players, gaming consoles, as well as media streamers like the Chromecast) hit record shipments of 84 million in Q4 of 2015, and the group says that the Chromecast has “cemented itself” as a Top 5 player in this category. 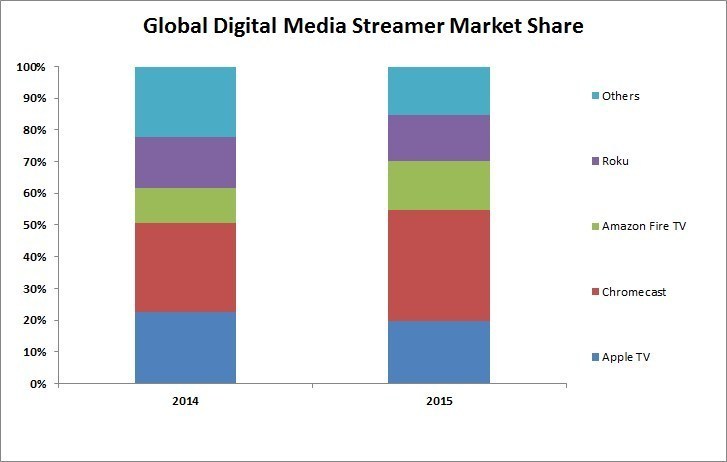 BOSTON, March 8, 2016 — Amazon, Apple, Google and Roku accounted for more than 8 out of every 10 Digital Media Streamer shipments worldwide in 2015, strengthening their combined grip on the fast growing category. Google’s low-cost HDMI dongle continues to lead the standalone streamer market and it has now cemented itself as a top 5 player in the overall Connected TV Device rankings according to the new Strategy Analytics Connected Home Devices (CHD) report “Global Connected TV Device Vendor Market Share: Q4 2015”.

David Watkins, Service Director, Connected Home Devices service said, “Google’s puck sized Chromecast dongle continues to have broad appeal with consumers who favor its mobile-centric approach to content access and control. The device’s portability and low price at just $35 has made it an impulse purchase for many and household ownership of multiple Chromecasts is not uncommon. However, the mobile device is not necessarily the center of the universe for everyone and devices such as Apple TV, Roku and the Amazon Fire TV continue to prove popular with those looking for a more traditional remote-based and UI driven TV experience.”

Chirag Upadhyay, Senior Research Analyst, Connected Home Devices service added, “Ownership of connected TV devices is not restricted to one device over another. Our research shows that US broadband homes own an average of 2.3 such devices giving them multiple means by which to stream video and audio content to the TV. While some consumers will have a favoured method, we find that most households are switching between different devices depending on the user and type of content being consumed.”