Hands-on: LG G5’s modular design and metal build is a peek at the smartphone of the future 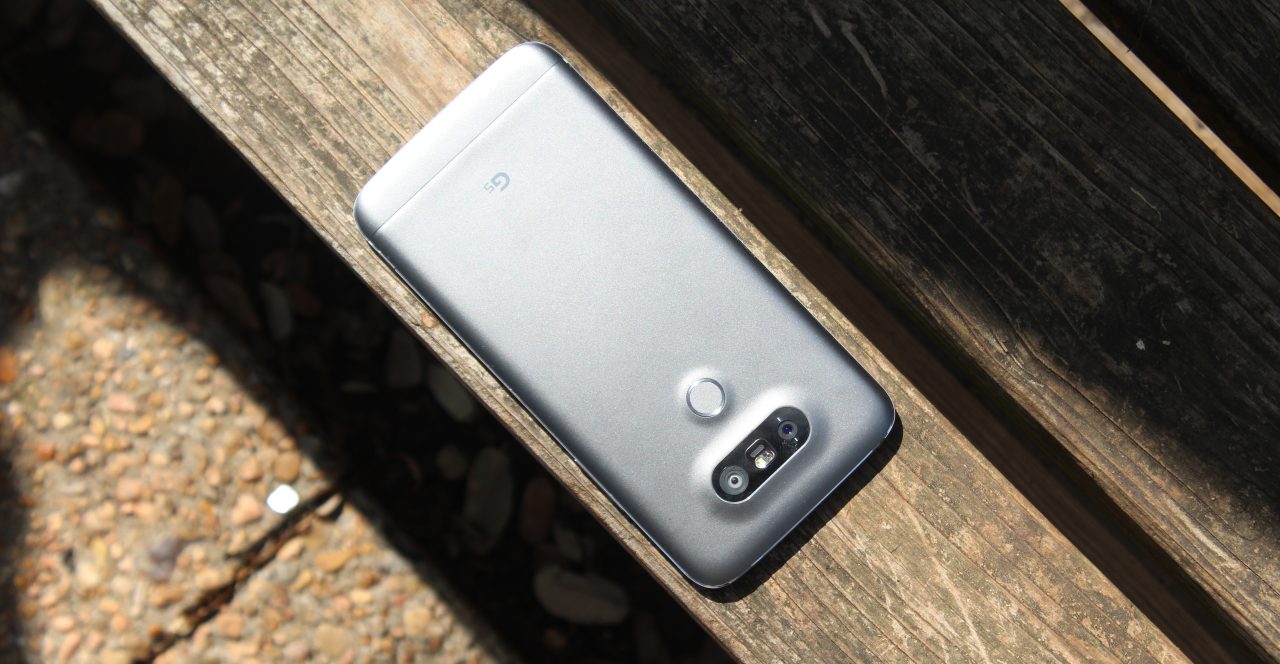 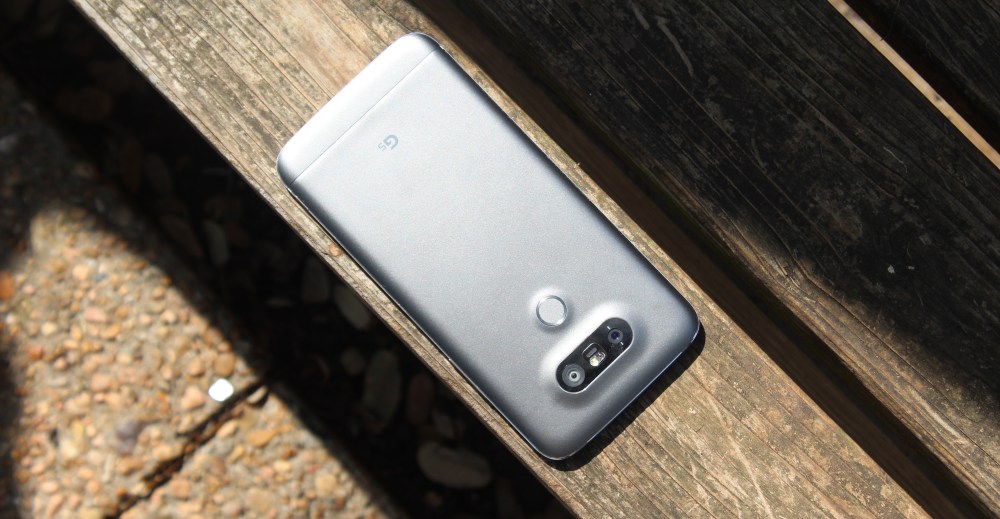 The LG G5 is a weird phone, but that’s not a bad thing. If you only look at the spec sheet, there’s not much about LG’s latest G series handset that sets it apart from the other Snapdragon 820-powered competition. On paper, it might as well just be another option available for those perusing the shelves at their local carrier store. It has USB Type-C, a fingerprint sensor on the back, a nice camera set up, and a decent build. All of these things are expected of a 2016 flagship.

But the weirdness of the LG G5 is what makes it intriguing to me. Samsung ditched its plastic in favor of a premium metal and glass build with last year’s handset, and this year LG is following in step with an obvious evolution in the design of the phone. The all-metal beast now just has a single lock button around the back, the volume rockers have been moved to the sides, there’s a dual-camera set up, and most of all, this phone is modular…

Before we get going I have to say that I’m a sucker for a really well-machined metal phone. I’ve always been a big fan of the iPhone for that reason. It’s not that there have never been metal phones on this side of the pond — HTC’s flagships come to mind — but the iPhone always had this premium feel and look about it that made me want to use it. The “aluminium” of these phones (no matter how much it may have been a marketing tactic) has always felt really good in the hand and just looks really nice.

And with the Galaxy S6, Sammy decided to go without the traditionally plastic build of its S line and moved over to a very iPhone-like metal-and-glass-backed build. Very quickly the Samsung flagship line became very attractive to me, and I would say that the Samsung Galaxy S7 — sorry, LG — is at the moment one of my favorite phones of all time. So much so, in fact, that I agree with our own Edoardo Maggio that it may just be the culmination of the ‘smartphone 1.0’ era as we know it.

But what is smartphone 2.0? As Ed mentions, there’s a potentially exciting path that lay ahead that is more than just shiny metal and glass. There’s a huge potential in the smartphone market for our phones to become even more personalized, even more intimate, and even more important in our lives. The first huge evolution that propelled the smartphone market was the introduction of the App Store in 2008. This marketplace allowed hundreds of thousands of developers all over the world to make money selling little pieces of software we now know as apps that created the unique experiences we all enjoy on our phones today. The App Store — and later the Android Market, to become the Play Store — revolutionized the way we interact with cell phones.

And that’s where the LG G5 comes in. I think it may be an early glimpse into a future smartphone market where we get build our own phones — it might just be the first commercial attempt at introducing a concept like Google’s Project Ara to the masses. Modularity of hardware — as developing and manufacturing hardware gets cheaper — is going to allow us to “install” personalized extensions of our phones for cheap. Just the same way apps did in 2008, this customizability will change how we interact with our phones.

Just like apps, though, it’s not obvious yet. While the App Store didn’t come around until iOS 2.0, Apple actually first introduced the world to apps a year earlier with iOS 1.0 — but many of us didn’t know it yet. I’m sure many developers saw the opportunity at hand, but the public was completely unaware that entire multimillion dollar startups were about to be born over the coming years and decades built entirely on just a couple phone marketplaces. Billion dollar apps like Instagram would soon be born.

Forgive me if you’re reading this in 2025 and laughing about my ignorance and poor future-telling skills, but I think that the LG G5 is our first clue that this idea is more than just an idea. Google is known for their experimental moonshot projects that come and go faster than grade school summer vacation, but I think the Mountain View company is just waiting for the right time. Initially, these modular phone projects — remember Phonebloks? — were mostly pitched as a way to fix the problem of broken screens and expensive repairs when accidents happen, but I think that there are much bigger implications than that.

Dav Hakkens, designer of Phonebloks, on “when the f*ck is phonebloks ready“:

Puzzlephone is crowdfunded and shipped in September. Seeed made a kit to make a DIY modular phone. Fairphone made their phone more modular. And last week(!) LG released their modular phone out of the blue. Watch their trippy video above.

We know, these phones are not compatible with each other and not as modular as Phonebloks, yet.  It takes a while to shift an industry. But we are thrilled to see the industry is slowly turning towards a more modular future!

The LG G5 ships without any additional modules, but right off the bat the phone has an advantage over its unibody-like competitors. Unlike the Galaxy S7, S7 edge, the upcoming HTC M10, the Nexus 6P, the Nexus 5X, the iPhone, and almost every other phone on the market, the G5 still has a replaceable battery. A feature that used to be one of Samsung’s bigger bragging points — remember when the company implied that iPhone users are wall huggers? — has now been completely forgotten. 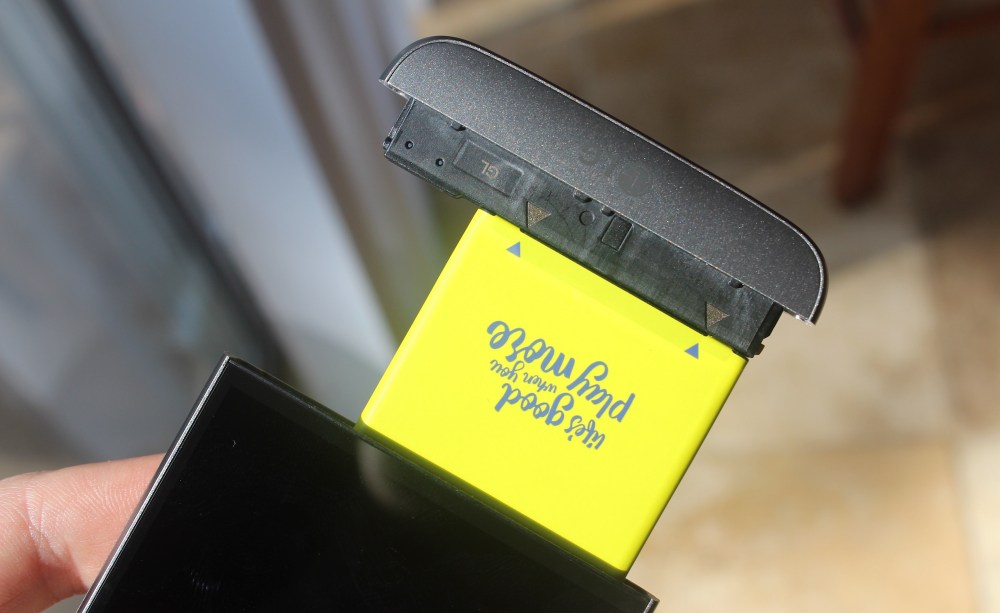 But the LG G5 brings more than just a replaceable battery. There aren’t many modules out yet, but LG introduced two at Mobile World Congress earlier this year. The first is the LG CAM Plus, which brings some hardware camera controls — like a zoom dial, shutter button, and a video record button — and the second is a piece of hardware called the Hi-Fi Plus, which is a headphone amp supporting music up to 32-bit/384kHz. Both of these little add-ons are niche, but that’s the point. If you’re someone who could replace their DSLR with the G5’s dual cameras, the CAM Plus model is great.

Also, LG is actively looking for hardware partners that can jump on board and build even more modules to attach to the G5. It probably won’t be until the G6 or later that we see some real traction, but it’s an exciting space that right now pretty much only LG can say they’re diving into head first.

We have a full review coming in a week or two or three, but here are some brief thoughts based on my few days with a pre-production unit:

The phone, unlike its predecessors, is all metal and it’s modular features come a price of making the phone only slightly thicker than the Galaxy S7 edge. Having the fingerprint sensor and lock button on the back works great; it’s basically a mix between the Nexus 5X and the traditional LG set up. I prefer right-side lock buttons like the S7 and the iPhone, but I can’t complain here. The curved glass at the top of the front of the phone feels comfortable on your ear and looks great. 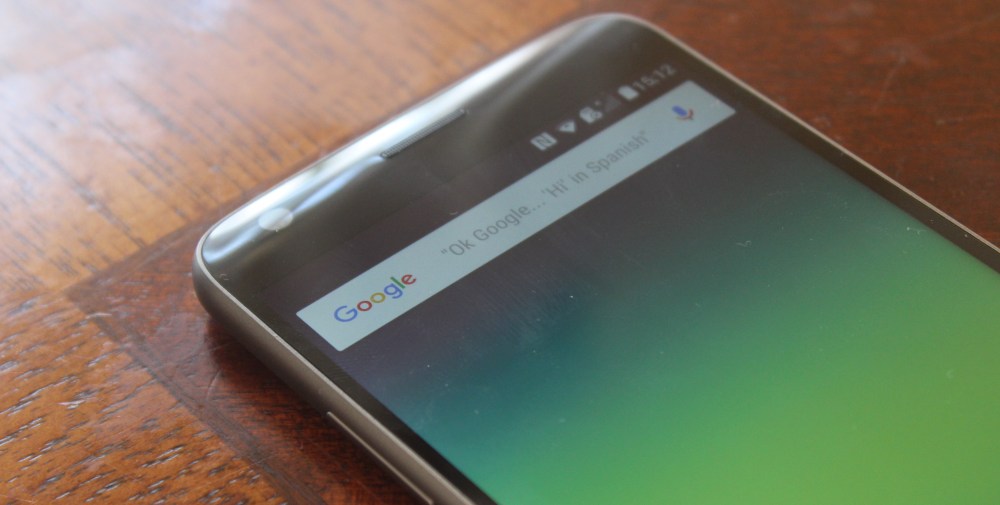 The 5.3-inch display is bright and crisp and looks about the same as any other screen with a resolution of 1440 x 2560 pixels, the phone has a nice super-big SIM card and microSD card tray, and the dual cameras on the back shoot some really cool wide-angle photos and video. Actually, that might be one of my favorite features of the phone — besides its modularity. If you’re into getting some good action shots, slapping this phone on a monopod would be a ton of fun.

The button you press to slide out the modules feels really solid, and it’s super easy to switch modules out.  One thing I noticed — which might be a very minor downside to the modular design — is that the bottom module drawer can sometimes leave a little bit of a gap between the bottom chin and the screen itself. This is definitely something that might be fixed by the time our final review unit rolls around and this phone actually hits shelves. 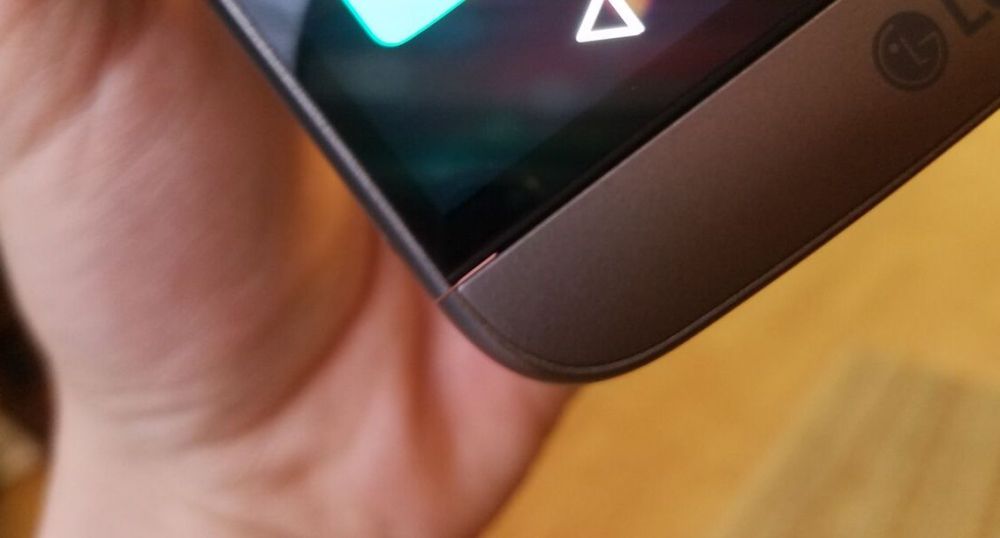 The software isn’t the best (coming from someone that prefers stock Android at least), but it’s bearable with a few modifications. I always go with the Google Now Launcher and the Google Keyboard, and LG isn’t going to stop you either. LG’s built-in apps are just kind of mediocre as well. They all get the job done of course, but many of them can probably be swapped out with Google-made alternatives available on the Play Store for free. Clock, Calculator, Calendar, and Keep come to mind.

Like I said the unit that I’ve been loaned is a pre-production unit, so we can’t make any judgements on benchmarks or performance quite yet, but I think it’s safe to say that the LG G5 is going to perform about as you would expect it to when it launches later this year. This pre-production model is pretty snappy and responsive, but I have noticed the occasional lagginess or frame rate drop while tapping around. That’s also something that I expect can be easily fixed in coming software updates.

Sammy is playing it safe. While the S6 and S7 are undoubtedly some of the nicest phones you can buy right now, they’re trading the core philosophy of Android — perhaps best summed up by the “Be together. Not the same.” mantra — for thinness and shiny super-slippery glass. I really like the phones, but I have to say that I absolutely admire what LG is trying to do with the G5. The company stayed true to the G line’s roots, but are also going out on a limb and reintroducing the mainstream market to the concept of modularity. Like I said, it may not be obvious yet, but I think we’ll look back and think of the G5 as the first of many.

And if modularity ever gets picked up — and if phone manufacturers can maybe agree on some kind of universal standard (or maybe narrow it down to just a couple) — I think LG’s decision to go with modularity over a thinner and unrepairable design is the right one.