The first pictures of the circular tri-button ZenWatch 3 leaked last week, but now another image that was found deep within a beta version of the official ZenWatch Manager app for Android has surfaced to give us yet another look. This time, instead of regulatory photos spotted at China’s NCC, we have an official render (seen above) that’s probably nearly identical to some of the artwork we’re going to see at ASUS’ IFA event later this month…

As you probably know, the first and second ZenWatch models sported some of the cheapest MSRPs in the Android Wear space, and — seeing that this watch will be circular and a lot more attractive — it would be awesome if the trend continued with the ZenWatch 3. If this image — as well as the gallery of images we saw previously — are to be believed, this watch will have a three-button setup similar to that of the LG Watch Urbane 2nd gen. LTE.

The images from China’s National Communications Commission last week showed us that the watch has removable straps, a circular screen (and with no flat tire, it seems), and a circular plastic charger and wall adapter. Those images showed a device that looks a bit on the thick side, but that’s definitely understandable if this is an LTE watch — and even moreso if it’s affordable.

As I’ve mentioned before, there’s probably not much secret in terms of the incoming watch’s software. If you’ve tried out Android Wear 2.0 (or read our full rundown on its features), you know just about everything there is to know. For the uninitiated, the new version of Android Wear features changes to navigation, revamped music controls, the ability for watch faces to show information from within apps, and more.

We’ll be on the ground at IFA in just a couple weeks, so stay tuned here for the watch’s official announcement as we’ll be going hands on — and we’ll have a full review of the watch sometime within a month or so.

Here’s the render without the green: 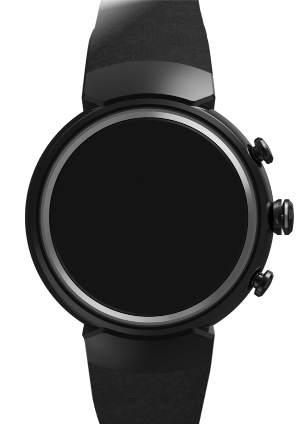