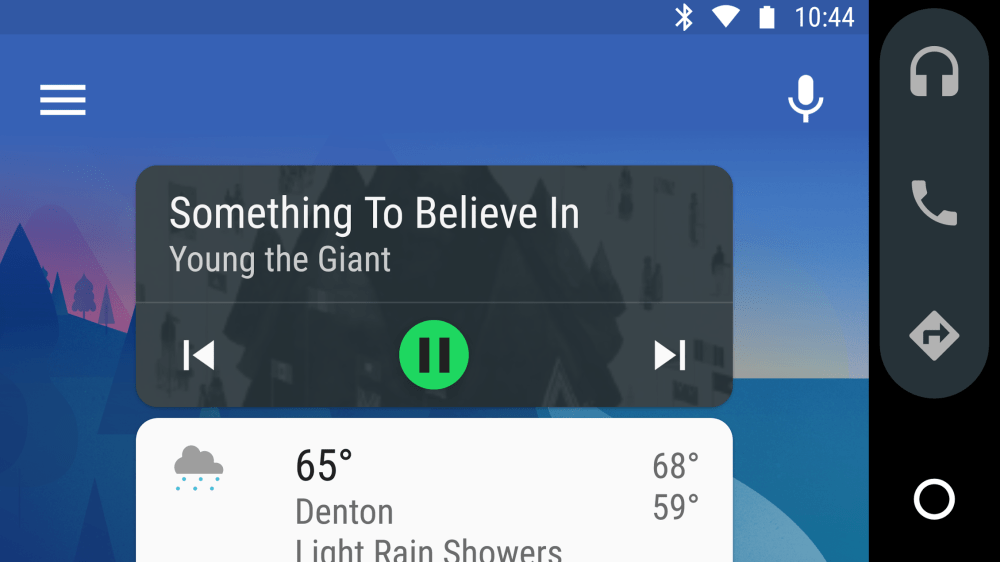 Android Auto launched in 2014, but until now you either had to buy a new car with hardware supporting the platform, or buy an aftermarket in-dash unit. Now, Google has announced that Android Auto will work directly from your phone — so all you need to get is the latest version of the app and (if you don’t have one already) a phone or tablet mount…

The interface — as you can see above — looks a lot like the Android Auto you might already know. There’s a home screen area with cards showing your currently playing music, weather information, suggested directions based on your recent search history, and more. And there’s a few other sections for making calls, getting specific directions, and playing music from your favorite services.

If you’re unfamiliar with Android Auto, it basically takes phone apps and blows them up and simplifies them to be safer for use in the car. For example, the phone section of Android Auto lets you see a history of calls you’ve made recently and suggested contacts, and lets you quickly tap in a number if you want. The music section lets you use a variety of music apps and offers a barebones experience that you can use voice controls to control.

Interesting, Google also says that this update brings support for automatically starting the app when the phone is paired via Bluetooth:

This update also brings the ability to automatically start the app when the phone is paired with Bluetooth. While you can put your phone in any car mount, please keep an eye out for Bluetooth-supported car mounts such as Logitech’s SmartCar mount, which is coming soon to the Google Store and select retail locations.

The update is rolling out on the Play Store over the next couple of days according to Google, but you can grab the latest version straight from APKMirror right now if you’d like. Google says you need an Android device running at least Lollipop to use the app.