It’s been two months since the Galaxy Note 7 was officially recalled, but not everyone who bought the phone has been willing to give it back. To encourage some of those users to return their device, Samsung has pushed out updates in certain regions to limit the Note 7 to a maximum charge of 60%. Now, it seems that Samsung is going to take even more drastic measures in the US by disabling Note 7 units entirely.

According to The Verge, one US Cellular user who still uses their Galaxy Note 7 received a text message recently which explained that Samsung was planning to completely disable the phone’s ability to charge starting on December 15th. The message reads:

US Cellular msg: AS OF DEC. 15, SAMSUNG WILL MODIFY THE SOFTWARE TO PREVENT THE GALAXY NOTE7 FROM CHARGING. THE PHONE WILL NO LONGER WORK.

It’s unclear if Samsung plans to do this just on US Cellular, but considering the fact that other regions with similar updates have gone across carriers, it’s likely that all active Galaxy Note 7 units in the US will get this update. Even previous updates on the Note 7 related to the recall were rolled out across carriers, so it would only make sense that Samsung would push this update to everyone.

Just the other day, Samsung pushed an update in Canada which disabled all radio functionality, including cellular, wifi, and Bluetooth, rendering the device mostly useless. However, by disabling the ability to charge altogether, Note 7 owners would be left with nothing more than an, admittedly pretty, expensive chunk of glass and metal.

As of November 4th, Samsung reported that it had recalled approximately 85% of Note 7 units in the US, but the company has yet to give us any updates on that figure. At this point, it’s likely that most Note 7s has been returned, but for those who continue to hold out, they might not have long… 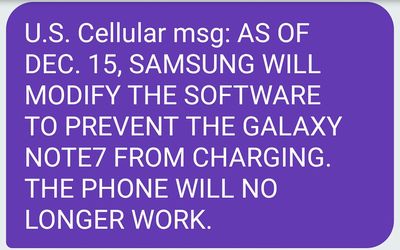