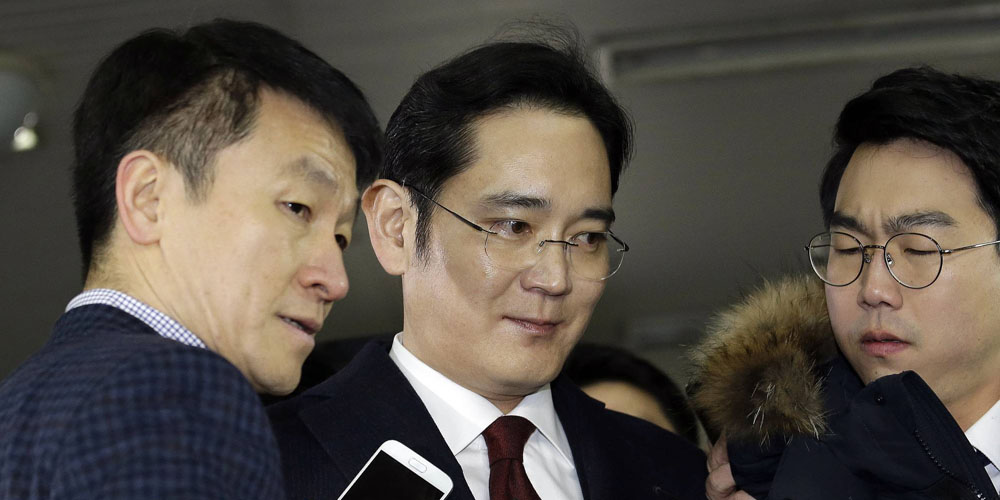 Lee Jae-yong, center, arriving for questioning at the office of the independent prosecutor in Seoul last week

With Samsung still reeling from the Note 7 disaster, the the acting head of the company now faces the prospect of arrest as part of a high-profile investigation into possible bribery and corruption.

The WSJ reports that special prosecutors are today seeking an arrest warrant for Lee Jae-yong, vice-chairman of the company and heir to the business. Lee Jae-yong has been acting head of the company during his father’s continuing illness, so his arrest would risk a leadership vacuum at Samsung…

Mr. Lee’s arrest warrant, accusing him of bribery, embezzlement and perjury, must be approved by a South Korean court, which is scheduled to convene on Wednesday. An arrest warrant allows the specially appointed prosecutors to continue their investigation while Mr. Lee is detained. Formal charges and an indictment would follow.

Samsung is accused of making ‘improper requests’ of the government regarding the merger of Samsung affiliates and approval of a leadership transition. The investigation is being linked to the impeachment of Korea’s president Park Geun-hye.

“We believe the bribery is linked to the president,” the spokesman for the special prosecutor’s office said, adding that prosecutors have evidence showing how Ms. Park and her confidante, Choi Soon-sil, have benefited from the bribe.

The prosecutor’s office estimated that the total size of Samsung’s alleged bribes was about 43 billion Korean won ($36 million).

Prosecutors said that they were mindful of the possible economic damage that could be done by arresting the head of a company accounting for almost a third of South Korea’s stock market value, ‘it is more important to seek justice.’

An investigation into the causes of the Note 7 fires has now concluded, with the company expected to announce next week that the battery was the primary cause.